What to think when "experts" get it wrong ... repeatedly??

So let me start by saying that I've gleaned a lot of useful information over at Dr. Davis' Heart Scan Blog.  But one thing I've noticed is that he rarely responds to comments left at his site.  Now, obviously, he's under no obligation to do so, but when the comments are corrective in nature, not doing so leaves the impression that he didn't even bother to read the comments and/or take them under advisement.
The first time I noticed this was in this post.

I'll leave the rest of that alone and deal with just the bolded part.  Chylomicrons are the circulating form of dietary fat and have nothing to do with carbohydrates.   Chylomicron remnants, are literally the remnants of chylos once stripped of most of their triglyceride load.  Therefore, these lipoproteins have nothing to do with carbohydrates as well.  Hans Keer from Cut the Carb corrected Davis on the posting date (7/9/10) here.

As far as I'm concerned, you cannot say enough bad things about carbohydrates, but unfortunately they are not responsible for the formation of chylomicrons and chylomicron remnants. Chylomicrons consist mainly of dietary fat.

Now, everyone can make mistakes and after reading I was going to post a correction of my own until I saw Keer had beat me to the punch.   But I fully expected Davis to correct the record and move on, especially since I had seen Keer comment rather frequently on the site, yet over two months later he has failed to do so.  This might seem like nit-picking, but when someone claims and/or is seen as an authority on certain issues, it would behoove them to get the little things -- those we know with certainty -- correct.
A month or so back, Davis made another somewhat glaring error in misrepresenting visceral fat in this post as the "hang-over-the-belt" fat.  This time I posted a corrective comment that was ignored.  (I've recently become very interested in the visceral fat/estrogen link due to my early menopausal state).  Again, this may seem to be nit picking, as Davis did post a picture characteristic of visceral adiposity in his 2007  Wheat Belly post.  It is often difficult to tell whether central adiposity is visceral, subcutaneous or both.  But given the metabolic and disease-risk implications of the distinction, it is important, IMHO, to be clear what visceral fat is.  To that end, Davis' most recent post really struck me as off the mark.  In Let go of my love handles, Davis is now equating the fat pictured below with visceral fat. 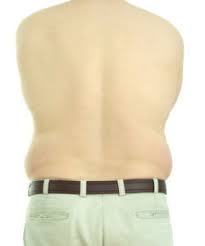 Now, such fat may well be associated with body types that have bellies containing a lot of visceral fat, but "love handles" are clearly subcutaneous fat.  Just an observation, but the low-cut jeans (women) and hanging off the butt showing the boxers (men) fads have given most of us an (unwanted) peek at way more love-handle regions than I think we really need -- particularly in young ladies and men.  While this has exposed more than a fair share of belly rolls, I've seen a LOT of rather lean examples of both genders with bounce-a-quarter flat bellies sporting little love handles.    So I'm not quite sure where Davis can even imply fat deposition here even correlates with visceral -- aka the dangerous kind -- fat deposition.  This was just posted yesterday (9/14/10), but Jenny of Diabetes Update fame already corrected the record here.
Will Dr. Davis correct the record?    UPDATE: I see now that Davis has addressed the love handles not being visceral fat dated 9/15.  I still let the rest of this post stand because he states that love handles are an INDICATOR of visceral fat.  True??
So the following originally followed Will Dr. Davis correct the record? ... Do you care?  Do I?  I do for the following reason.   One of the reasons for all my research is that very quickly I've become jaded and skeptical of all manner of experts around the internet -- some with genuine credentials, others who peddle credentials in related areas into purported expertise on matters, and some with no credentials at all.  Oddly enough, it is sometimes the latter who are most accurate, and the most credentialed who disseminate factually incorrect information.  Not always, but sometimes.  When Davis makes such fundamental errors on issues that are not controversial (e.g. there's no controversy over what visceral fat is or the origin of chylomicrons), it makes me skeptical of every statement he makes.  I do still follow his blog, but more and more I find myself using his topics as a "jumping off" point for my own research rather than, as I would like to see them, as informational with at least the opportunity for discussion.  Davis is certainly free to run his blog as he wishes, but when he doesn't participate in the commentary and respond to related questions from reasons, this comes off as lecturing from a point of authority.  I can no longer take any of his posts at face value as being factually (to the extent of current level of scientific knowledge) correct.  So, re: UPDATE -- is there any research linking love handle fat to visceral fat?
Posted by CarbSane at 9:49 AM

Re: chylomicron remnants - I've read that high carb intake can cause chylo remnants to hang around longer in the bloodstreams of people with insulin resistance so maybe that is what Dr. Davis is referring to. I can't explain his stance on chylomicrons though.

Great blog! Thank you for all valuable information and ideas!

I think that the main problem with Davis probably is the same of many: is very difficult to admit in public that you were wrong about something. More if you are supposed to be the expert in that matter...

Thanks Mario! Welcome to my blog :)

Yep, it is difficult to admit when you are wrong, and the written communication makes it more difficult. It's easier to say you misspoke in a verbal communication of extemporaneous thoughts (more difficult when delivering a prepared speech) than for blog articles, even if they are written "off the top of one's head".

But I think obvious blunders that stand uncorrected look far worse than a mea culpa or even a simple, "what I really meant to say was" way out. Davis essentially did that in the love handle clarification (although I question whether this clarification is true). If it is a matter of Davis "misspeaking" on his blog with some frequency, I might suggest to him that better proofreading would be the first line of defense, responding quickly to corrections a fall-back.

LynMarie, here's where I get nit-picky because Davis should get it right. If he intended to say that carb intake can increase fasting chylo remnant or postprandial chylo remnant concentrations due to reduced clearance, he should say so. Maybe it is a matter of being more careful? I think the problem word is *formation*. Carbs are not involved in the formation of chylo or chylo remnants.

This is similar to Dr. Eades once claiming that the cloudy plasma a couple of hours after eating a fatty meal is due to the carbs in the meal being turned into triglycerides!!

Oh I definitely agree that he should be more clear. There's too much misunderstanding floating around about these topics as there is!

Thanks for the post and your wonderful clarification. I stopped reading heartscan blog 2 yrs ago!

Welcome to my blog Dr. BG! I've only recently followed the blog on any regular basis, in the past it was to read the occasional post linked to on a discussion board. Most of those were sound. His butter & insulin post started me wondering a bit ...

You have to remember, Dr Davis not only updates his free heartscanblog website on a regular basis, but also the trackyourplaque website AND has a full-time medical practice. It's a miracle he has time to even read the comments on heartscanblog, much less respond to them or update the original post. Anyone who wants to is free to correct him, and he doesn't delete replies by those who disagree with him. I've frequently disagreed with his crusade against oats and carbs, for example. All things considered, I've probably learned more and gained more from Dr Davis's blog than any other diet blog out there.

People who challenge conventional wisdom often tend to become fanatics after a while, as they realize that fanaticism is the only way to get their message across. If fanaticism helps speed progress, then bring on the fanaticism I say, even if the fanaticism also leads to some crackpot ideas. If it were up to lazy moderates like me, nothing would ever get done in this world.