- August 10, 2012
For background on my tongue-in-cheek paleo/ancestral inspired reality series, see this post (scroll to the picture of Giada to skip the AHS commentary).  But for a quick summary this shall do:  Imagine if you will that an alien species, the Giada, came to Earth and traveled through time selecting various specimens of human cultures and transported them to caves carved into the Palisades cliffs.  Along with the humans they were able to perfectly duplicate the environments.  Now these caves have been discovered, and the cast of Jersey Shore has been chosen to portray real-life modern day members of these ancient humans. 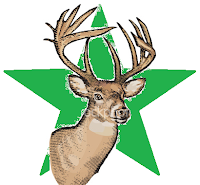 What we've learned about these long-hidden cave populations is that through the millenia contact and interactions occur fairly regularly while drinking that universal ancestral beverage coffee,  at Buck Star.  Still, the Giada insisted on maintaining cultural purity so intercultural mating was strictly forbidden.  Also, for whatever reason, the Giada installed a big screen TV-like window into each cave so the various inhabitants were aware of what was going on in the outside world around them and as subject to some trends as any developing culture .... 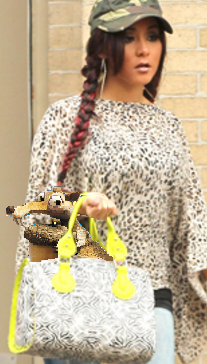 Episode 1 begins with Sprightli strutting into Buck Star sporting animal prints** and a large yellow purse.  Muckluk aka The Saskatchewanation and Paulai PhD are squatting by the couch.  You see, as they haven't been shielded from modern fads of surrounding extra-Palisades cultures, Sprightli had seen the movies Ice Age and Legally Blonde and was big into the paleo fashion scene.  So despite leopardish skins not being a traditional garb of her culture, she sported them anyway.  But Sprightli wanted to start a trend amongst her Pima.  Inspired by the acorn obsessed sloth Sid in the Ice Age movies, she figured this would be her best bet!  After all, acorns were a staple food of her ancestors ... what could be a more perfect fit.  So Sprightli contacted the Giada to send her a sloth.  Giada was especially playful that day and decided it might be a fun experiment to see what would happen if a sloth were to be introduced into the Pima ecosystem ... and so they complied.   I think Sprightli nails the look ... what say you?

Sprightli:  This is my new pet sloth, Gluttony.

Paulai:  That's very interesting, I didn't think those were indigenous to your native habitat.

Sprightli:  Yeah, but they eat acorns like I do and chihuahuas don't so I thought this would be cool!  Already half my friends are trying to get one too!  Isn't he cute?

Muckluk:  I don't know Sprightli, he doesn't look too good.  And what's with that giant acorn.  Is it GMO (geochemically molecularly oversized)?

Sprightli:  I don't know, he came with the acorn.  Doesn't seem to want to eat it though.  Muckluk, you got any lichen or seal jerky back in your cave?

Muckluk:  No can do babe, I'm saving the seal meat for my dog and I just emerged from hibernation myself so I'm pretty shredded, see?  {opens coat to expose abs}.  Need me some healthy polyunsaturated fats here soon.

Paulai: {who has been surfing the net thanks to more Giada technology}   Sprightli, you know what the problem is?  Sloths are not arctic acorn eating creatures!  They are Central and South American jungle creatures, and eat leafy greens.  Where's you get the idea they ate acorns?

Sprightli:  From the Ice Age documentaries of course!  {Pauses ... then looking rather dejected}:  So you mean I can't feed him my diet?

Paulai:  Probably not.  And Muckluk can''t take him either.  Maybe I can, it's not the same but perhaps I can build a nice little refuge for him to live out his life.

Sprightli now reaches deeper into her bag to pull out her lunch.  Today she's got a porridge of sorts made with mesquite and tepary  beans.  She begins to chow down.

Paulai:  Allow me to take this one Muck.  Sprightli, you are obviously unfamiliar with the latest research showing that legumes are bad for you and to be avoided.  That and my culture [Masai] has thrived on a relatively high animal flesh and fat diet and this has been determined to be the best diet for all humankind.

Sprightli:  But ... but ... Giada says ... and my mother and her mother and many mothers before that all ate these foods.

Paulai:  NO!  We must go further back ... to the very beginnings of human civilization for guidance.

Sprightli:  But the Giada left decades ago and they destroyed the records they had gathered in real time.  Sigh.  Maybe I should just resort to Gluttony.

Yes folks, I did this episode first because we've discussed this here many times before.  Despite what Gary Taubes -- who by all Twitter accounts just regurgitated the same old same old -- continues to misrepresent, the traditional Pima of Arizona (and those in Mexico of similar descent) were not some sort of low carbohydrate consuming culture.  Yes, the quality of their carbs differed, but they contained considerable amounts of starch nonetheless.  So the rest of this is probably repeats from cites in posts or comments, but it will be nice to have it all in one place.

First up, a 1991 piece in none other than The New York Times:  To Preserve Their Health and Heritage, Arizona Indians Reclaim Ancient Foods.  If you haven't read it, this is really worth the read.

their [food's] high content of soluble fibers that form edible gels, gums and mucilages, and a type of starch called amylose that is digested very slowly. The combined effect is to prevent wide swings in blood sugar, slow down the digestive process and delay the return of hunger.

On the Arizona desert, the desirable food ingredients are found in edible parts of such indigenous plants as the mesquite (mes-KEET) tree, cholla (CHOY-a) and prickly pear cactus, as well as in tepary (TEP-a-ree) beans, chia (CHEE-a) seeds and acorns from live oaks.

While we're on the topic of so-called safe starches, and the glucophobes are trying to redefine the meaning intended by the Jaminets in PHD ... let's throw something entirely different out there.  How about it can be the TYPE of starch AND the packaging that's really the issue?  When we get to Aborigina's episode, I'll have more on this as well, but the focus -- especially vis a vis diabetes in these populations -- does really seem to be the type and NOT the amount of carbohydrate.  Many of these diets, the Pima included, were rich in starch, it was just a different starch than modern foods.

Here's a nice paper:  Plasma glucose and insulin responses to traditional Pima Indian meals.  The meals are beans and pods and such soaked for a week, pounded, baked and such ... perhaps with a little venison.  Mesquite cakes, hominy corn, acorn and venison stew.  Remember ... the Pima were "sprightly" on these traditional foods.

Let us not forget this summary paper:  The Traditional Pima Indian Diet: Composition and adaptation for use in a dietary intervention study.

Even adding in significant error, this is a low fat diet.  Very low fat even by USDA recommendation and most LF diet standards.  This is Pritikin terroir.

It is worth noting  that the Pima thrived on this diet.  And not using mesquite wood to smoke their beef and pork ribs for the bar-b.  They had neither an obesity nor a diabetes problem.  But there's no denying that their carbohydrate load, while perhaps of a safer sort from a glycemic point of view, was decidedly unsafe by the paleolithic standards where all grains and legumes are almost universally shunned.

Dunno ... in doing my research for this series, I think that may well need to be given some serious reconsideration.

** Fashion Disclaimer:  I too had all my animal prints (I'm a fan) lined up for AHS, so it is with lighthearted humor that I poke at the fashion statements :D

Unknown said…
Chris is right - he says "If Drs. Rosedale and Shanahan are going to advise us to avoid an entire class of food that has been eaten for a couple of million years by humans, the burden of proof is on them to tell us why that food isn’t safe. Evidence from roundworm experiments and biochemical/mechanistic speculation is not enough in the face of overwhelming evidence that starch and glucose are safe in the absence of certain existing health conditions."

HOWEVER - the diet she used originally was a LOW FAT diet - has she now changed to a higher fat diet?

Saturated fat should not exceed 15 grams per day.
Unsaturated fat (oils) should be kept to 20-50 grams per day.
No red meat for the first year.
After the first year, 3 oz. of red meat is allowed once per week.
Dairy products must contain 1% or less butterfat unless otherwise noted.
No processed foods containing saturated fat.
Cod liver oil (1 tsp. or equivalent capsules) and a multi-vitamin and mineral supplement are recommended daily.
August 11, 2012 at 2:55 PM