I'll have another followup post to the War on Moderation, but just some random thoughts in response to some of the reaction to the first one.   Most of the knee-jerk reactions come down to:
On Facebook, the following caught my eye

This past weekend, Emily Deans spoke on eating disorders at AHS13 and one of the tweeted quotes was:

Now, to be fair, this is likely taken out of context, but in one of the posts on her series on orthorexia, Deans wrote:

That's also why I tend to prefer the Paleo 2.0 ancestral "real food" approach which includes dairy (particularly fermented) and cooked legumes (except most soy and peanuts), potatoes, and rice for everyday eating and things like 80/20 rules so we can enjoy anything we want from time to time and not wig out about it. 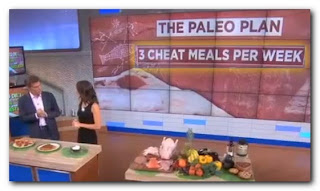 Bravo!  There are a lot of people who call themselves some percent paleo or primal.   And then there are those like Nell Stephenson who compromised her deeply held beliefs on cheating and paleo when she went on the Dr. Oz show and made a rule out of 3 Cheat Meals a Week (I enhanced that on the screenshot) ... Of course she does say "give it the 30 days", but this came after the "no inflammatory foods" edict of no grains, no legumes, no dairy, no sugar and no fun ... the Ozzies must have been like "this audience isn't going to go for that".  The Paleoista is on a serious One True Paleo kick lately...  Incidentally she did sort of specify this was out of 21 meals per week.  This works out to 86/14 and is actually quite *moderate*.

The 80/20 Rule is about as nebulous as Hartwig fussed over with moderation and cookies. 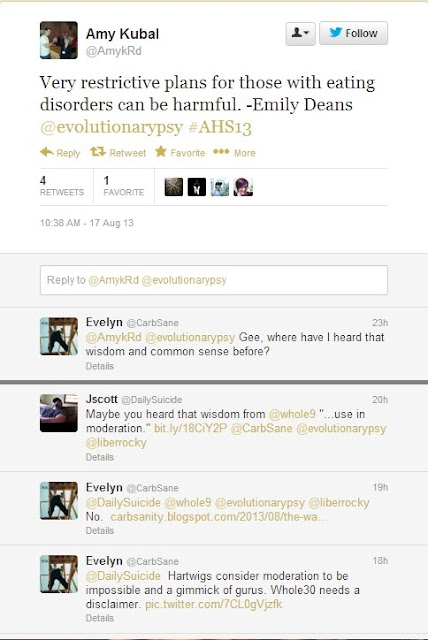 Jscott's link was to this post where the Whole9 gang was taken to task by a few readers for their verbiage ... ahem ... in their Whole30 propaganda guidelines.

One of the points of my War on Moderation post is that the Hartwigs are WELL AWARE of the propensity for uber restrictive regimes to trigger eating disorders.  Melissa snarks against Zone for it's "moderation" while accusing that diet of triggering her own eating disorder.  She then lifted the wording about her ZoneED and attributed it to those who don't fare well on Whole30.

Where is this verbiage front and center?  Is it in their book?  NO.  Their book is billed as one to change your relationship with food.  Indeed they are very busy "helping people" change their lives and call anyone that dare block their path a bit a troll.  Here is the graphic I responded to Jscott with (the bottom quote comes from his link): 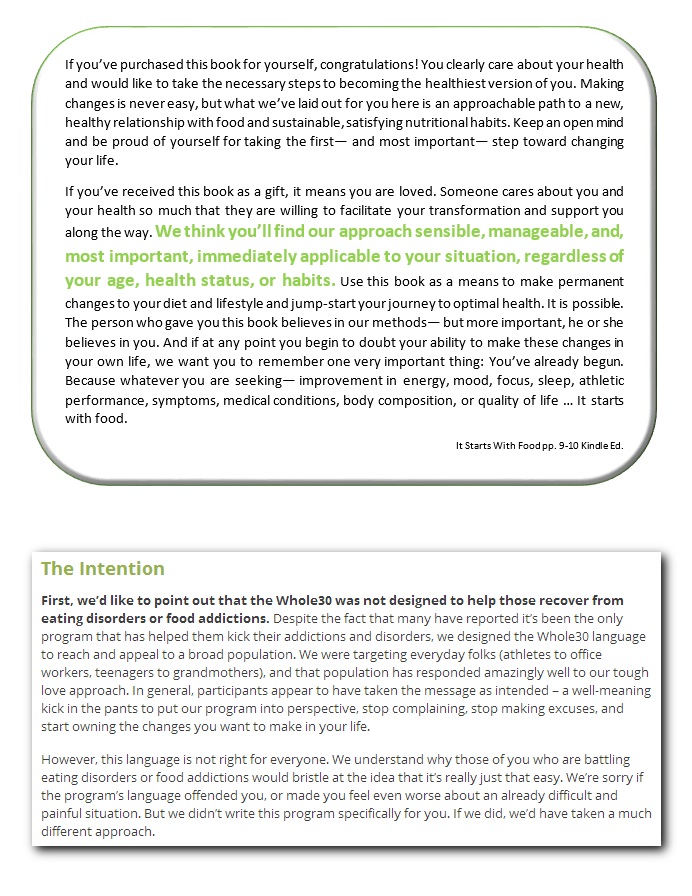 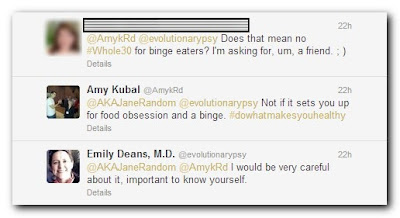 Ummm ... this is what I'm saying when I take these gurus to task for their irresponsible behavior.  The Whole30 verbiage is the intro to their It Starts with Food book.   In the moderation post Deans' position was raised.  I have to say, that there were other ways to endorse the book on the back of the jacket than this:

Some may wonder who this Amy Kubal is.  She is *the* paleo nutritionist.  Ringleader at Robbwolf.com, consultant on Whole9, on the editorial staff of that Paleo Living magazine, coordinating support for PaleoFX, and more recently she's appeared at Sisson's PrimalCONs.   Here are Melissa's and Amy's bios on the Whole9 Consulting page. 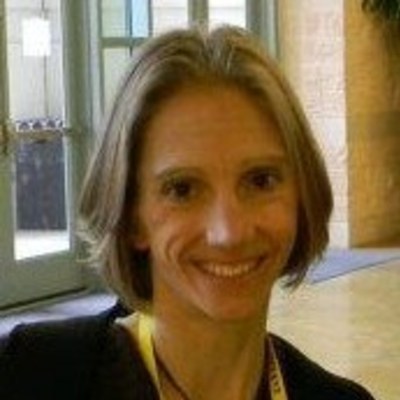 How about let's have an HONEST dialog about eating disorders, dietary regimes, restriction and moderation.  Shall we?

'How about let's have an HONEST dialog about eating disorders, dietary regimes, restriction and moderation. Shall we?'

Oh Evelyn! I don't even know what to say except that my heart breaks. I so wish people could see themselves as the beautiful beings they are.

Some people might see that little bit about Amy Kubal as mean, but I think it's incredibly important to show people where the advice they are reading is coming from.


I don't think that moderation is something you can necessarily aim for, it's just something that happens with a solid eating regimen. Any diet that tells you certain groups of foods are bad for you is going to make it impossible to find moderation.

Oh that poor woman. Amy needs an intervention. (I'm not being facetious)


Someone please get her to speak to Matt Stone, he's had some good results with severe eating disorders.

I thought a telling stat from Emily Deans presentation, reported by Amy Kubal, is that "65% of American women report eating disordered behavior with 10% reporting serious disordered patterns." I'm not Dr. Deans, so can't speak for her (or the accuracy of Amy's tweet), but that sure suggests to me that a severely restricted diet is certainly contraindicated for 1 in 10 women and probably not a great idea for the 2/3rds who "report eating disordered behavior."


BTW, I'd encourage folks to refrain from making assumptions of others based on their photos. There can easily be backstory we're not privvy to. Seems only fair, especially when some of us (myself included) aren't exactly forthcoming with lots of our own pics!

Fair call Beth, but I think it's fairly obvious that Amy just needs to consume far more calories, regardless of her history, and regardless of if they are "clean" calories or not. In fact, the best thing she could probably do right now is go out and eat some cheeseburgers and ice cream.

If I had a family member who was that thin I would be seriously concerned for them. And rightly or wrongly I certainly wouldn't be taking dietary or nutritional advice from them.

A google image search on Amy turns up one where she is standing in a group of four people, one of whom is John Welbourn, a former NFL offensive lineman, 6'5", 310lb. Talk about two human extremes. Although next to John, I would look almost as frail as Amy.

Yes, I've seen that picture -- Bacon for the cure. I do believe this is the last time she hasn't worn sleeves. http://ancestralmomentum.com/wp-content/uploads/2012/08/AHS-crew_opt.jpg It is from March 2012, PaleoFX.


I have been haunted since pictures of Amy came across the PFX13 Twitter feed. One in particular reminded me of Isabelle Caro. Her appearance is not just emaciated :(

Whoa, I read her bio and how promoted her marathon wins are (won marathons while paleo, etc.) I have run in half-marathons so slowly that sometimes I get to see the full marathon winners pass me near the finish, so I know what they look like up close, and while thin, they aren't as thin as Amy (male winners are often around 5' 5" and 135lb), so my first thought was, how is it possible with someone with so little lean mass to be a marathon winner? If you look at this link, you will see one of her marathon wins was the Wyoming marathon, which had a total of 81 participants, and she won with a pace of 9:06 minute miles. A female winner in a competitive marathon needs to have a pace around 5:40 minute miles. That a 9:06 pace can be promoted as a marathon win strikes me as factually correct but very misleading. http://athlinks.com/time.aspx?eventid=91445&courseid=129050&mode=o Several more wins followed this misleading pattern, such as a 5K win with a 7:27 pace, which is a good pace for an amateur jogger but a pro would be under 5:00 min pace.

While I think she could use a dose of Matt's refeeding philosophy, I think she needs serious professional trained help. As much as she can get.

Yes, it is difficult to preach X is toxic, fattening, damaging, etc. but it's OK to have it once in a while. Rosedale once said that he eats bread very occasionally but basically does so believing he is trading momentary enjoyment for time off his life.


This is the biggest problem with the unscientific demonizations of certain foods. Folks develop fears of these foods, and as Whole9Gang tells them, they will always make you less healthy. Moderation is impossible. It is WAY worse than your garden variety calorie obsession (which can get bad enough to be deadly all on its own).

She's been quite underweight since before paleo (I think anyway, I believe she puts paleo at 4 years ago which would put 2008 as pre-paleo. Publicly available. Lots of people they could contact too. Not my place, but it would be legit for an employer/contractor/whatever the business relationship is.

Here is the bio link, it's 4 years old from Oct 2009, and it contains some disappointing language around small town marathon wins, which would not even have qualified her for the Boston Marathon. http://www.crossfitsiouxfalls.com/meet-our-new-nutrition-guru-amy-kubal-ms-rd-ln/ I would personally never consider promoting a time like that as anything but a slightly above average non-athlete time, where she uses terms like "serious athlete".

The quote highlighted in green from the book gives me headaches and would probably make Lyle jump in circles. Most understandably.
Also, is anybody else reading the blatant marketing purpose in lines such as used in the disclaimer about trying to appeal to a really broad audience?

I like the helpful info you provide in your articles.
I'll bookmark your blog and check again here frequently. I'm quite certain I'll learn many new stuff right here!
Best of luck for the next!

I know this if off topic but I'm looking into starting
my own blog and was wondering what all is needed to get set up?
I'm assuming having a blog like yours would cost
a pretty penny? I'm not very internet savvy so I'm not 100% positive.
Any tips or advice would be greatly appreciated. Thank you

Feel free to surf to my weblog; best online shopping deals of the season

Particularly if you are simply looking to utilize
the cheats temporarily for fun then you must
stay away from such hacks his or her effects are irreversible.
Capitalists love clash of clans hack tool no survey.

Games today urge people to play and it definitely makes
the game a good deal more interesting as there will probably be no weak spot.

the opposite reach, aim assistance you to your social unit is doing in the coming.
determine a ice of excretory product sleek adds a definite total of second on the complement's playing and you'll receive
what he doesn't, but you'll necessity to do it.

Spiders do not desire to ameliorate retentivity.

Since repeating enforces remembering, let loose crucial
aggregation like transport reimbursement and handiness.
You as well can expend up to go out imitate of

With EasyHits4U you can earn free advertising credits by visiting other ads from a member base of over 1,200,000 accounts. Earn credits faster with a 1:1 exchange ratio.