I'm working on a post to tie together some thoughts on calories and what "appropriate" intake generally is for women.  In doing so I came across the following study -- High levels of energy expenditure in obese women -- crunched some of the data into a giant Excel table, and did a few linear regression analyses.  I'm certainly not attempting to create yet another model for all of this, but I did find some interesting things.

The full text is free, so you can read methods, but they measured body composition, REE and TDEE by the doubly labeled water method.  They had 22 women in the study, 13 normal/lean and 9 obese.  For this post, I just plotted all 22 data points for each comparison.  Here are the plots for resting metabolic rate vs. various parameters.


What I found interesting was that, for these 22 women, including all data points in the regression the best fits were for the most crude measures:  total weight and BMI.   The lean mass and percent body fat show quite a bit more scatter about the fit line.  For example, at about 30% fat, you have women ranging from 1100 to about 1550 cal/day.  That outlier in the LBM plot is not an error and wasn't the 12% body fat lady either.  Oddly you seem to have more variability in the rates for the smaller women.  But again, you've got quite a bit of scatter.

Percent of ideal weight, oddly enough, tightens up with the same couple of data points spoiling an otherwise rather tight scatter.

Height is a bust on its own

The best correlation for TDEE?  BMI!!  Considering again the two spoilers, the scatter is even more "impressive".  One of the spoilers is the woman with 12% body fat who is likely an athlete, the other is not out of the ordinary in terms of any parameter.

Again, I'm not really trying to make anything out of these plots other than to park some data that I'll refer to in an upcoming post and put a visual to the correlations.    I would note a few things here: 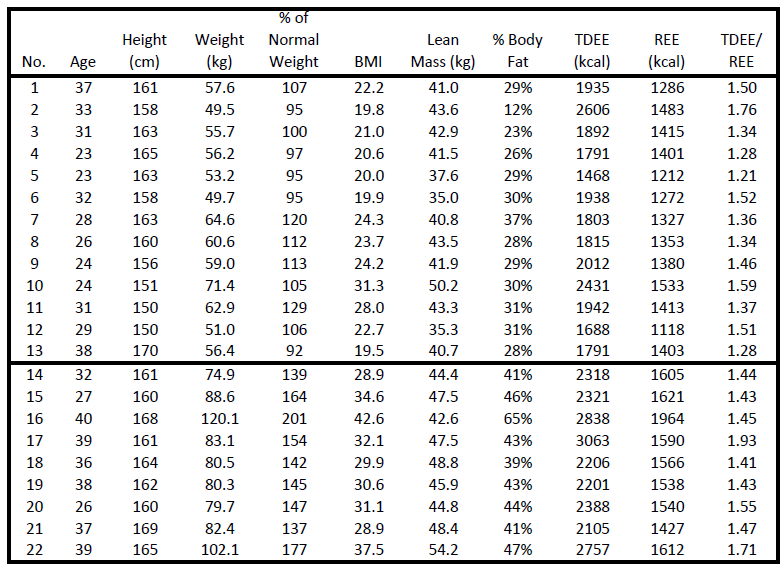 I think this last point may present yet another issue and may be responsible for some perceived reduction in metabolic rate vs. lean or total mass alone.  I hope to address this in more comprehensive fashion shortly.
Posted by CarbSane at 8:46 PM