Hello all!  A quick follow-on post to yesterday's offering on the Ma-Pi2 diet for diabetes.  This diet is vegan, grain based (brown rice, millet, barley), includes legumes and copious veggies, and "macrobiotic" foods like seaweed and green tea.

I want to make clear that my purpose for blogging on this particular diet is not one of advocacy.   I don't believe there is any evidence for humanity avoiding all animal derived sustenance and, sorry, but the Ma-Pi diet does seem a rather austere one to me.   Furthermore, I am offering no comment on the "macrobiotic" claims and whether the inclusion of some of these special foods is integral to the success of these programs.  When looking at the success of programs such as native Hawaiian diets (discussed here), and others, which neither contain special foods and include some animal products (chicken in the case of the Hawaiian trial), my best educated guess is that they are not magical.  That said, seaweed may act as a "supplement" of sorts.

OK so why Ma Pi Meta?  Well, on the last post Charles linked to a similar study in Ghana.   This and the joking thought of becoming a paid shill for Big Macrobiotica (grin) got me to wondering if there was a Ma Pi diet book or program out there.  The search for which landed me on this article:  Ma-Pi 2 macrobiotic diet and type 2 diabetes mellitus: pooled analysis of short-term intervention studies.  There have been four such short term (21 day) trials.

My apologies that I don't have time to analyze further, but I think these speak for themselves and folks are welcome to contribute their own analyses here in comments, etc.

There is pretty much improvement across the board here with the possible exception of those who would find a miniscule drop in HDL of issue.  And then there are the box-plots for glycemia.  Per my last post, the box plot breaks the sample/population into four equal sized groups.  In this version, the "box" is bounded by Q1 and Q3, and usually the line in the "middle" is the Median.  Here it is shown as a point.  The "whiskers" represent the bounds of the upper and lower quartiles where they have "itemized" out extreme and outlying variables so as not to unnecessarily skew the plot. 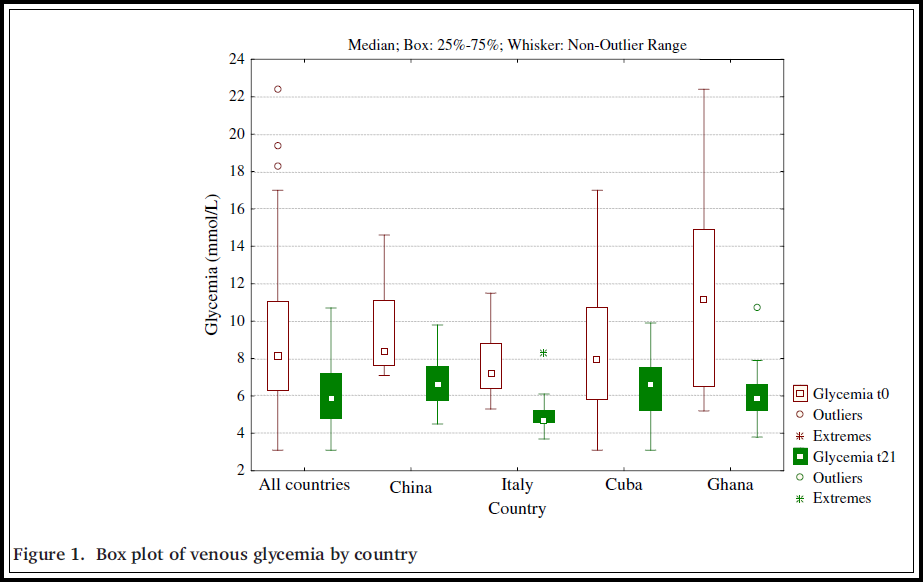 This is pretty impressive any way you look at it.  There can be no honest way by which to pin hyperglycemia on dietary carbohydrate intake.  Not in light of these studies (and countless more, but these are in peer review journals, and even such as those can be, are more accountable than reports from individual guru health centers and the like).

Required Reading for the hangers on:  The Cause of Hyperglycemia in Type 2 Diabetes

Background and aims: The original MADIAB trial (randomized controlled trial of 21 days in type 2 diabetic patients who were admitted and followed-up in hotel settings for such period) comparing the macrobiotic Ma-Pi2 diet with the diet recommended by scientific medical societies for the treatment of type 2 diabetes (control diet) showed the beneficial effects of the former on HbA1c, weight loss and lipid profile. In order to investigate whether these achievements are maintained and, most importantly, to assess the acceptance
and compliance of these two diets in the real-life on the long-term, a 6-months follow-up study was carried out in patients who participated in the MADIAB trial.

Materials and methods: The follow-up study included 43 type 2 diabetes patients (n= 18 in the Ma-Pi2 group, mean age 64.4 years ±10 and n= 25 in the control group, mean age 63.6 years ±9) who continued their respective diets for a 6-month period. Anthropometric measurements and blood samples for biochemical parameters were assessed at the end of the MADIAB trial and after 3 and 6 months of the follow-up period.

Conclusion: Both diet treated groups (although the Ma-Pi2 group showed higher weight loss and a tendency for greater reduction in HbA1c) maintained an excellent metabolic control underling the important role of an intensive initial short period of closely monitored diet in the therapy of type 2 diabetes. This study emphasizes the concept that, beyond the type of diet, a close follow-up and a continuous reinforced diet program helps maintaining
metabolic control in type 2 diabetes patients on the long term.

Thanks for a great, informative blog!

To escape accusation of having any bias you have to be in the 98% non-vegetarian when it comes to nutrition and health. That is interesting.

According to the Taylor "crash diet" studies, it's pancreatic and liver fat that is cleared. http://carbsanity.blogspot.com/2011/07/diabetes-crash-cure-pancreatic-fat.html

This is what I like to call "draining the swamp" ;-)

I definitely think that VLC and Paleo do this early because they are both very low calorie diets in disguise. I recall one extremely vocal man on Jimmy's discussion board who insisted calories had nothing to do with it. He was in the high 300 lb range to start and losing weight like gangbusters. He then posted his average caloric intake. Care to guess? It was like 1300 cal/day. I think in terms of Ma Pi, it may be that the calorie deficit is not as important if the fat content is very low. We focus a lot on fasting levels, but the "real deal" appears to be what happens in the postprandial phase and the issues begin with inefficient clearing of dietary fat into fat cells which may be more important than fasting regulation in terms of deposition in liver and pancreas. Just a thought there.


I think at this point, it might be time to think of "classic" T2 is dysfunction, not disease (as T1 is). So this is where I see a difference between chronic carb restriction and Ma Pi or the crash diet, etc. If insulin secretion is restored, I consider a functional pancreas "cured". If you can't eat a normal carb load without diabetic blood sugars, you are managing pancreatic dysfunction.


As to your Dad, I'm curious, does he gain weight when he returns to the more liberal veggie diet? Not a lot but some? In my first link I updated that post with the story of a man who cured his diabetes with the crash diet. He was not even technically overweight, but his threshhold is lower than others. Also in the Newcastle study, some saw things creep back with weight regain. How fast will this be? Who knows. But , barring binging, it seems to take far longer to fill up the swamp than to drain it so you have some leeway. Personally (just me!), if I had diabetes like your Dad and I could reverse it with a month on Ma Pi that lasted a year? Perhaps I'd do that. Ma Pi May! :-) But I'd probably rather try to see if incorporating one or two "strict" days per week into the regular rotation might keep things on the even keel.

P.S. Regarding Fung and Keifer. I cannot listen to the latter ;-)
Fung has some ideas about carbs and insulin that do not square with the scientific evidence. Even Taylor can be mostly correct w/o being entirely so on a mechanistic level. I don't know for sure, but de novo lipogenesis beign the primary source of hepatic (and subsequently pancreatic) fat, does not appear to be a sustainable hypothesis based on work by Hellerstein (and hopefully I get to blogging about something from Frayn's group in that regard as well).

We'll probably all keep going in circles trying to find a definitive first event in all, but early on before frank diabetes there's a loss of acute GSIS which suppresses glucagon and hepatic glucose production in the postprandial state. Eventually the insulin response is larger to compensate, but it's not "insulin resistance" that causes that. This is pretty consistently documented in the diabetes literature.


Kinda lost respect for Fung when he endorsed Sam Feltham's book as well ;-)

Thank you for the thoughtful responses. You've helped me understand a great deal here on your blog. Seriously - I follow a lowish-moderate carb approach and your blog & Alan Aragon keeps me grounded and on track.

When is the CarbSane Miracle Shake for Diabetic fasting going to be released? A pleasantly macrobiotic blend of beans, sweet potatoes and pineapple juice?

Kiefer is a piece of work but I got sucked in. I'm also intently listening to see if he has anything idiotic to say about the upcoming Taubes/Aragon debate since he seems to despire Aragon.

Jung had nice things to say about high carb, LF diets and agreed they were all workable and he'd endorse them just felt that there was less risk in a properly constructed carb restricted approach with fasting thrown in.

He also said that bariatrics are "cured" of Type II very quickly without going LC or losing much body fat. I think he might lack deep knowledge but he's not dogmatic like Kiefer. At least he didn't appear to be. More clinical than research oriented I suppose.

I think I listen to Kiefer regularly just to stay annoyed (I know, what does that say about me??).

About my Dad - he was IMO not getting enough protein in his diet. This led to him at times keeping his weight consistent but just seemed more and more emaciated. I suspect he was eating away his muscle and gaining more bodyfat so I'd speculate that his liver/pancrease were fattening up again.

Perhaps the "swamp" was filled up and he was told to get back on metformin.

I'm also now pre-diabetic - going to track it closely. Focus more on protein and resistance training to see if I can keep a reasonable carb intake going.

I might try intermittent low calorie "NuttyK" - if I lack the discipline to properly fast 1 day out of the week.