Context is important ... always.  But never so important, it seems, as when we're talking about fructose.  The vast majority of studies used to demonize fructose involve either:
Doing some math, let's use some 500 cal/day increments, a few percentage levels, and  a traditionally sugar sweetened beverage, Sierra Mist (26g sugar in 8 oz, or 3.25 g/oz). 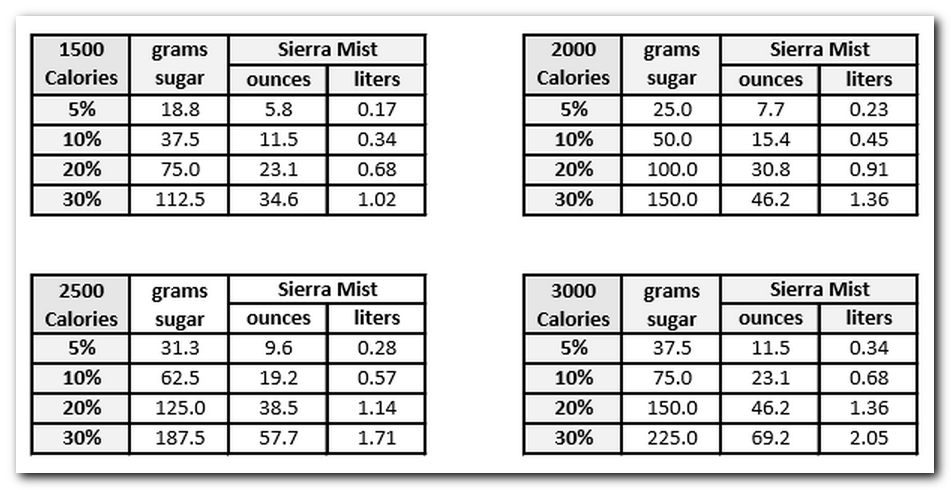 So, for example, if I consume 2000 cal/day and want to push the envelope and consume 20% of my calories from sugar, that's 100 grams which I can get by drinking one and a half 20 oz bottles, or almost a full liter bottle.  Each and every day.   It doesn't sound like all that much to some, but I'd venture to guess that's almost a liter more per day than many (myself included) are consuming now.  If the point is to displace fat calories with sugar (rarely done), this would need to be offset by consuming ~4T (¼ cup) less of butter.  More commonly it is intended to displace starchy carbs, so in that context we're talking about the carbs in 4 medium sized potatoes being replaced with a drink.

Sugar substitutions in nutritional trials are almost always in the form of sweetened beverages ...

... thus almost always displacing some manner of solid food in the process.   For whatever reason -- this is not a post about mechanisms of overeating and satiety -- this seems to have an effect on humans of increasing caloric intake unless there are some constraints in place to restrain it.  This, unfortunately, has led to numerous trials looking at the effect of sugar in general, fructose in particular, in a weight gaining, caloric surplus state.   This is in stark contrast to most trials on VLCHF diets, whereby the percentage of fat calories may have gone up -- sometimes considerably -- but absolute fat intake is relatively constant or reduced, while participants are in a caloric deficit, weight loss state.  Numerous "n=1" (how I have come to loathe that term!) experiments have shown lipid improvements on junk food weight loss diets (e.g. Haub's Twinkie diet).

Bottom Line #1 Here:  If one is going to look at the metabolic effects of a macronutrient (or subtype of a macro), comparisons would ideally be in weight maintaining caloric balance.  At the very least, the results from fructose/sugar in caloric surplus need to be compared with whatever else (e.g. saturated fat) also in a surplus state.

This is simply not a "natural" physiologic dose.  Whether someone is using good old fashioned table sugar (sucrose), HFCS, honey or maple syrup, or whether someone is consuming various fruits, every gram of fructose is almost always associated with about a gram of glucose.  Sometimes this is exact, as in the 1:1 nature of the sucrose molecule, sometimes it is a bit in favor of fructose, as in the 55:45 ratio of the HFCS used in SSBs.  With fruits it varies a bit more as most fruits contain a mix of sucrose, free fructose and free glucose.   In any case, common sweeteners and sweets (the new kid agave syrup being an exception) are nowhere near a pure fructose "unbalanced" load.

Even studies looking at doses that could "feasibly be consumed in a normal diet", are horribly confounded by lacking some semblance of "real life" dietary context and concomitant glucose ingestion.  To put some numbers on this, again using 2000 cal/day and 20% = 100 grams sugar ... this amounts to 50 grams of fructose in Sierra Mist.  Instead of testing this, in an effort to unnaturally "isolate" the effect of fructose, such a study may compare 100 grams of glucose to 100 grams of fructose.  The problem here is that the former has a "real life" counterpart -- that being some easily digested starch.  Meanwhile you would have to consume 200 grams of sugar, or 40% of 2000 calories/day to consume 100 grams of fructose ... plus you have the glucose in there.  Such a diet would replace 800 calories of starch, or the carbs in 8 medium sized potatoes!!

Bottom Line #2 Here:  Fructose only interventions do not approximate real life dietary exposure to fructose.  It cannot be excluded that any "unique" metabolic responses may be due predominantly or even entirely to this factor alone.

Stanhope et.al. Has It All!

I don't know when I get to the post for which this one is a backgrounder, but there's a pretty famous study floating around out there that pretty much epitomizes all that is wrong with human fructose research:

I blogged on that here:  Gary Debunks Taubes ~ It's the Fructose Stupid!

This study pretty much has it all:


Even NuSI President, Peter Attia, MD, agrees with me about the clinical relevance of fructose-only interventions. 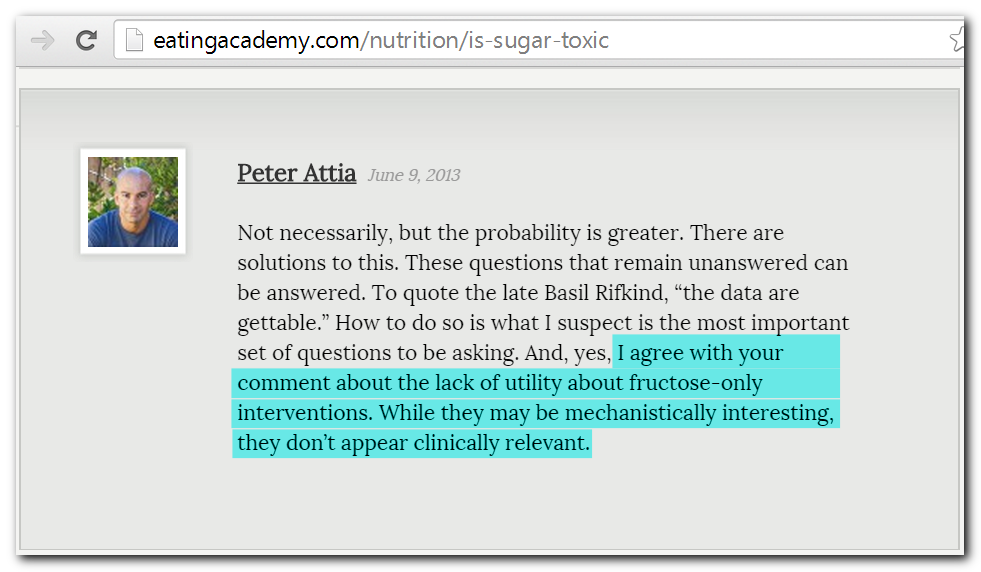 In my opinion, clinical trials on DIET ought to employ dietary interventions that are reasonable approximations of what might occur "in real life".  Since the results of such studies are almost invariably interpreted in the context of normal possible intake, fructose-only studies should be all but removed from the discussion.
Diet Comparisons Fructose Robert Lustig Fat Chance Fructomania Scientific Method

Ron Krauss is on the NuSI Scientific Advisory Board. He needs to read these papers, and so does Peter Attia.