The first thing I do when I see a new paleo diet study is try to find out WHAT the diet actually was.  So even before I got the full text, I saw the "group" author and the description of the ramped up diets and knew it was her brand of paleo.  Here's a summary from this post, which has links to individual posts I've done on the other various studies.


As you can see, Frassetto stands out because they are high calorie (weight maintaining), and thus relatively high carb.  Her version would also qualify as "low fat" and exceeds (as in lower than) current sat fat reductions from the AHA for those with heart disease.    I blogged on what appears to be the same diet used in a 10 day 2009 study here.  The study:  Metabolic and physiologic improvements from consuming a paleolithic, hunter-gatherer type diet.  This first diet was done in only 9 healthy sedentary folks.  Again, there are details in my post, but to save a trip about the web, and because the diets aren't detailed in this current study, but the ramp up protocol sounds identical, I include the screenshot below. 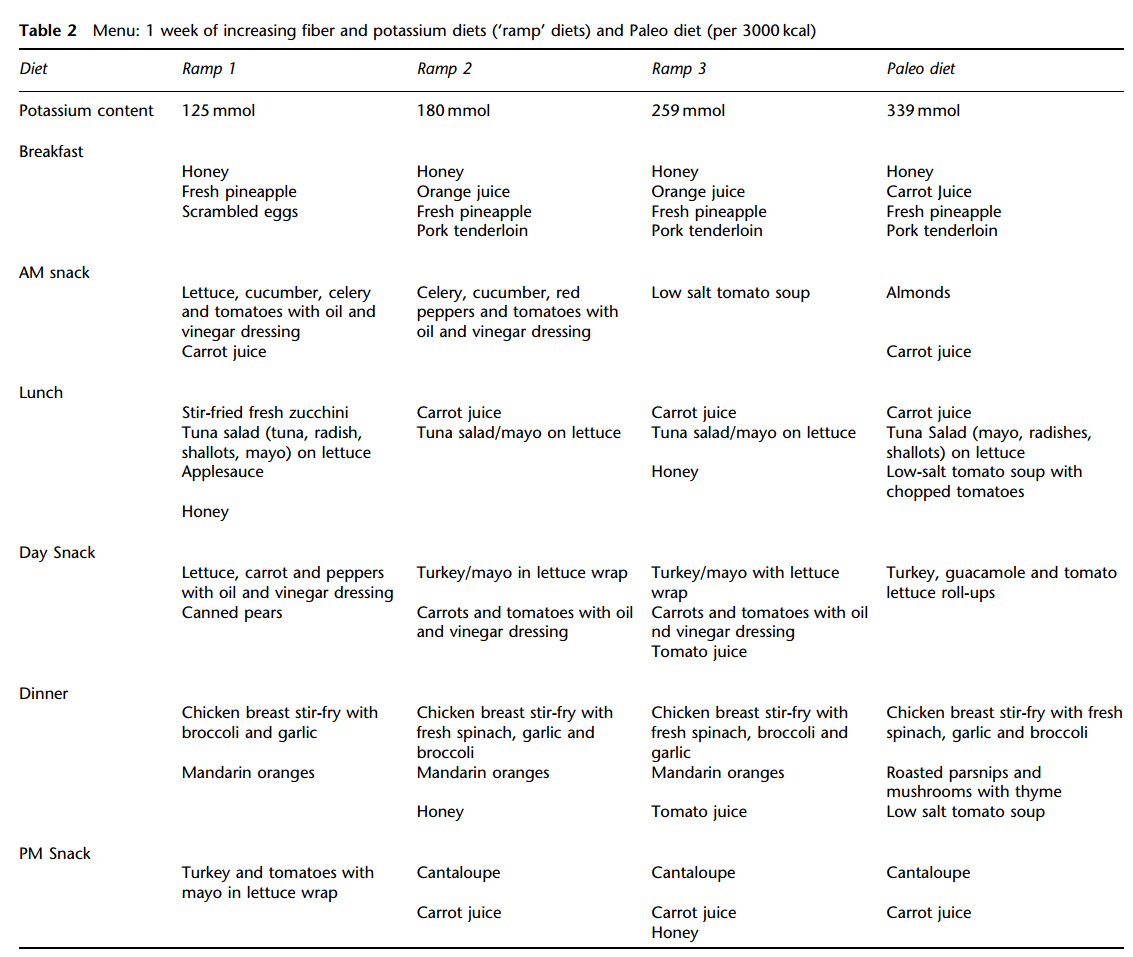 Synopsis of Current Study in Diabetics 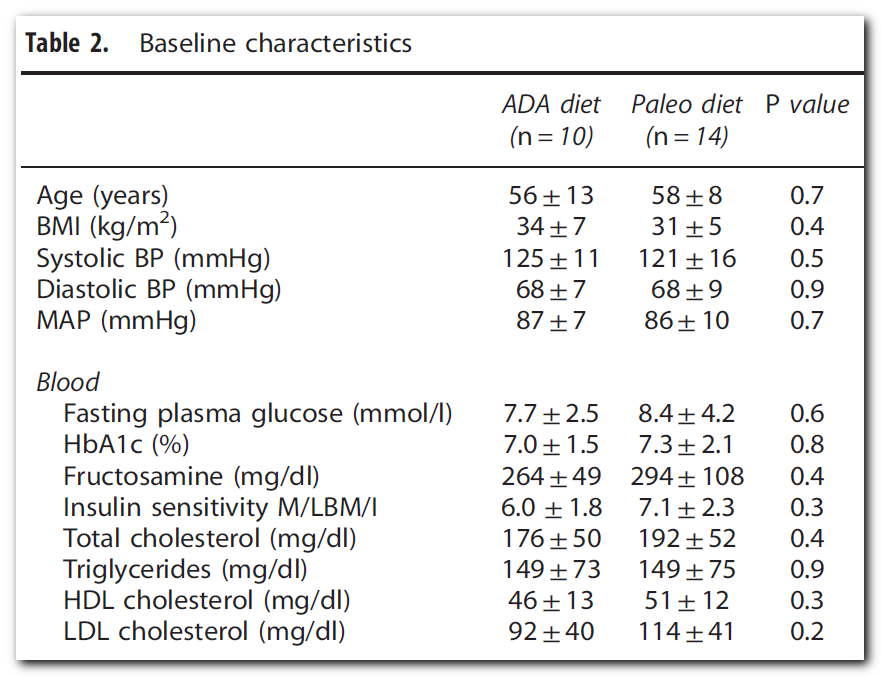 There is no information provided as to the distribution of these subjects between groups. Doses were maintained throughout trial, any supplements stopped at recruitment.

All meals/snacks provided in outpatient setting, some eaten at the center, the rest packaged for take out. Calories were calculated for individual weight maintaining needs and adjusted if weight fluctuated. Macros below.

This is a high carb diet with roughly 400 grams carb per day. Looking at the menus from the previous study, and the protein differentials, one can presume more honey, fruit, tomato soup, etc. make for the difference.

"Baseline data ... were collected while patients were on their usual diets (days -2 to 0).  Then, subjects were randomized either to the Paleo diet or to the ADA diet. There were three ramp-up diets for 7 days, then 14 days of the test diet.  All the initial tests were repeated at
days 19 to 21."

"Ramp 1 diet was 1 day, ramp 2 for 3 days and ramp 3 for 3 days and then the Paleo diets were eaten for the remainder of the study. There was no ramp up for the ADA diet."


Both groups had improvements in metabolic measures, but the Paleo diet group had greater benefits on glucose control and lipid profiles. Also, on the Paleo diet, the most insulin-resistant subjects had a significant improvement in insulin sensitivity (r=0.40, P=0.02), but no such effect was seen in the most insulin-resistant subjects on the ADA diet (r=0.39, P=0.3).


The table of statistically significant changes between groups is shown below.

OK ... and now for the results

Only the change in fructosamine flirts with statistical significance in the between group comparison.  This statement -- "the Paleo diet group had greater benefits on glucose control and lipid profiles" -- should never have made it past peer review.  Shame on you European Journal of Clinical Nutrition.

There seems to be some "milking" going on here to find something to write home about with the correlation of IS improving most for these who were most IR only on the paleo diet.

This is the full table.  The change in IS for the Paleo diet group was not statistically significant (p = 0.09 ... vs. p = 0.1 for ADA) so this correlation seems meaningless to me.  Meanwhile, when between group tests showed no differences, the authors resort to the following:

I'll definitely be publishing up a Part II in a few days at most (it's mostly written, but waiting on one section so I thought to split it up).  But some bullet points, some of which are to be expanded upon:

But in well controlled diabetics, providing foods so that they actually followed what turned out to be a somewhat hypocaloric diet, over 400 grams of carbohydrate per day for three weeks led to reductions in HbA1c over a three week period.  This reduction, within each diet group, was statistically significant.
Ancestral Diets Carbohydrates Diet Comparisons Paleo/Primal Type II Diabetes

Steve Parker, M.D. said…
Evelyn, you've got pretty sophisticated readers, but some of them may not know that fructosamine reflects blood sugar levels over the prior 2-3 weeks, while HgbA1c corresponds to levels over the prior 3 months. I'm a little surprised they analyzed and reported HgbA1c at all.


One thing I don't understand is how the ADA diet group saw a statistically significant drop in HgbA1c but not fructosamine. I can’t explain how HgbA1c goes down over three weeks without a change in fructosamine level. I suspect one set of numbers is a red herring, i.e, wrong.
-Steve
April 17, 2015 at 1:53 PM

StellaBarbone said…
That was my first observation, too. Also, wide confidence bars reflecting the tiny population. I imagine this little oddity would disappear in a larger study or longer term. However it's also been my observation that A1C is more volatile or at least involves more measurement error than we've been lead to believe.
April 17, 2015 at 2:17 PM

Tom Naughton defends a high protein diet to the VLC masses (i.e. the ones like Jimmy who say to avoid protein to stay in permenant ketosis). You'll see later on in the comments Mr Naughton gets very defensive over his ward Jimmy, when someone asks why he's gained weight on a keto diet. Naughton uses an excuse of Jimmy possibly being a "thermodynamic paradox" like a lady who gained hundreds of pounds on a 1500 calorie/day diet due to a brain tumor. The excuses just keep on coming for ol' Jimmy.
April 17, 2015 at 3:36 PM

carbsane said…
Due to the "nothing really to see here" nature of this study, I'm not inclined to do my usual share of the full text. But if you want to email me at carbsane at gmail dot com, I'm happy to share. I haven't even gotten that far, frankly, because the duration, and other factors I'll discuss in Part II render this study useless. Too bad, really.
April 17, 2015 at 4:11 PM


(I think they reported sodium and potassium intake in mmol for the Paleo group and mg for the ADA group)
April 17, 2015 at 7:12 PM

StabbyRaccoon said…
I really do like how calories were controlled, there definitely needs to be more of that. Although it's impossible to control everything, for example the paleo diet had about half of the saturated fat as the ADA diet, I hope no high SFA paleo authors praised the results of this. Anyway that might account for the difference in glucose and LDL, I'm not convinced that saturated fat definitely increases insulin resistance but it definitely can contextually increase insulin resistance.

I also noticed that that the paleo group started off worse off for glucose and LDL, which means they had more room to improve, that they improved a bit more could be a function of that.

There seemed to be a difference, though not statistically significant, in triglycerides. That could be expected if the paleo diet group included more fish/omega-3 fats.

Yet again the "benefits" of name diets can likely be reduced to their changes in already-established important dietary attributes. This gives me no reason to change anything in my diet
April 19, 2015 at 1:04 PM

Hello_I_Love_You said…
Hey, doc, it's called the "glycation gap" and is very common. In fact, if you're not aware of the disparity between A1c and Fructosamine, then you haven't studied diabetes or treated diabetes patients enough. There is general correlation between the two but depending on whether you take Metformin, the renal involvement of your DM, your blood counts (Hb, RCB, MCHC), the numbers can vary significantly. If you have high MCHC like I do, your A1c will be lower than your Fructosamine consistently. And that's just one variable. Only those who interpret the two markers exclusively as a time difference cannot understand the discordance that arises when reconciling 2 markers. It is entirely reasonable to see a statistically significant drop in A1c but not in Fructosamine and vice versa, especially given the noise of the data and the general low levels of variation we saw. Just google "glycation gap."
April 19, 2015 at 3:30 PM

carbsane said…
Yes, also protein was controlled somewhat -- which makes the paleo diet a bit more of an anomaly than it would otherwise be. I have more thoughts on this study as a clinical trial in general.

>>>This gives me no reason to change anything in my diet<<<

carbsane said…
Full table ... I have to look more closely. Is there some indication in the text about unit differences?
April 19, 2015 at 9:26 PM

Hello_I_Love_You said…
The Paleo group was supposedly excluded tubers (except parsnips & carrots), grains, and dairy. So most of the carbs (437 grams) came from tropical fruits: cantaloupes and pineapple in the 1st week -- which is severely limiting the carb sources offered. Look at the menu: carrot juice 4 times a day (that's where all the potassium came from), tomato soup or tomatoes 3 times a day. Then it's all poultry except for pork tenderloin at AM and tuna fish marinated with canola oil which Cordain loves.

If I was offered a diet like that, I would run for the hills. I mean, I would go to the queue, put the food on the tray but never finish everything on my plate. That's probably why those lipid and BG markers improved, albeit ever slightly -- by eating less and throwing out the rest. They can offer measured portions but cannot control that you finish everything on your plate.
April 20, 2015 at 1:29 AM

StellaBarbone said…
You say tomAto, I say tomAHto. There could be multiple reasons for the difference; one person with a hemoglobinopathy, measurement error, non-compliance, etc. With such a short term follow up and tiny sample size, you really can't draw much in the way of conclusions.
April 20, 2015 at 12:33 PM

Hello_I_Love_You said…
That's exactly what I said in the second part of my answer. The first part of my answer was that it's not unusual for A1c and Fructosamine results to diverge significantly for reasons specific to the standards of measurement, not due to randomness or standard error. Do you understand the point here? They're 2 separate issues. As for the former, you simply won't know that the two results diverge and how often they diverge if you don't have enough clinical experience administering such tests to DM patients. Most family physicians and even endos are not aware of the difference and the persistence of the difference, which is not surprising here given the original comment here. As for the latter, it's a design flaw and the noise you have to deal with in every study but which happens to be more pronounced in this one because of the weaknesses of the study design. Separating those 2 issues could explicate the matter for you, StellaBarbone. Your point is frivolous because you confuse the two and trivialize the reasons why they may be different by lumping the substantive issue what the biomarkers represent and the randomness in interpreting such markers.

Steven said…
Nothing besides the Paleo group having a higher intake of potassium, just that the values make more sense that way
April 21, 2015 at 7:48 AM

Blogger said…
Having Trouble STICKING with the Paleo Diet?

Do you want to munch on healthy delicious recipes as soon as TONIGHT?