I've done a couple of background posts on this topic, and I've decided to dub it BabyGate. In doing so, I now have the freedom to launch another unending series of related posts. (Read: I might actually get to posting what I want to in some timely fashion!)

Tim Noakes, outspoken advocate of Banting (sic) #LCHF diet -- apparently for all! -- has been called to a hearing by the HPCSA.  The issue is a complaint filed by the dietetics board in South Africa alleging inappropriate conduct on social media for tweeting advice to a mother to wean her baby onto a low carb, high fat diet or "real foods".  According to this report:

"By implication I was saying that the child should not be weaned onto the traditional high sugar, high carbohydrate processed cereals."

Noakes said this has been the norm in the US in 1936 since the introduction of these foods by the Gerber Baby Food’s Company, which is now a subsidiary of the Nestlé Group.

Excuse me?  I realize that these crusaders like to play fast and loose with facts, but the hubris of these folks is just astounding at this point.  Firstly, referring to grains as "non-foods" is not even laughable at this point, it is pathetic.  Secondly, here is a snapshot of one Gerber cereal (from Google, the official website only lists one more ingredient after the ... which is folic acid, but it's less image-friendly) 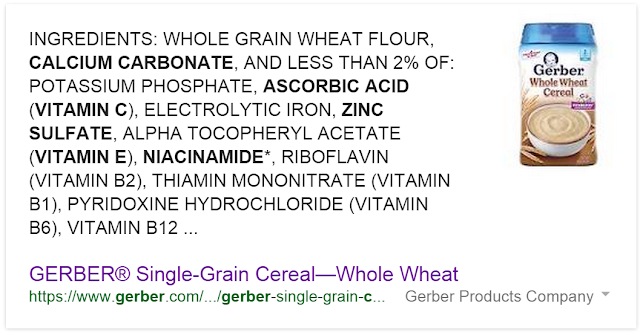 
But it was more the ridiculous notion that Gerber (Big "Teh Ebil" Food) had somehow invented this notion of weaning babies onto cereals.    More accurately, cereals have historically been used as some of the first complementary foods (while still breastfeeding), and even to partially replace breastmilk. 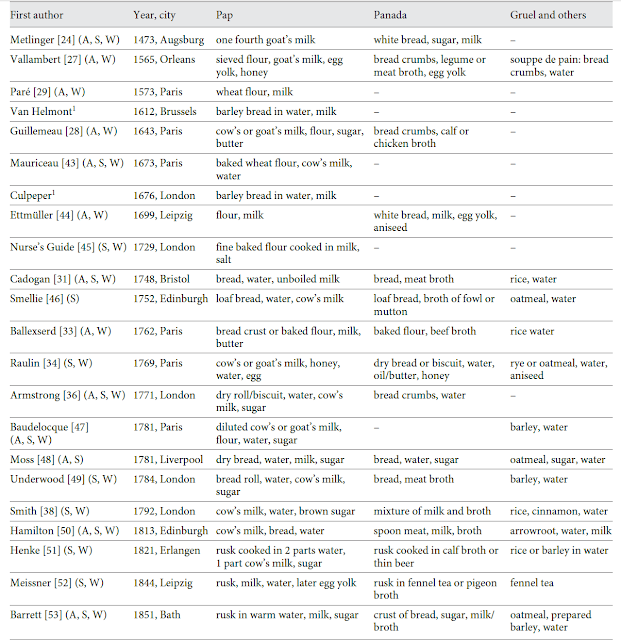 How about one from one of the fathers of paleo?


Age at weaning in intermediate-level societies reportedly ranges from immediately after birth in the Marquesas Islands (Linton 1939) to a number of cultures that wean as late as do the !Kung. As with direct-contact carrying, leaving the hunting-gathering subsistence mode behind appears to permit rather than constrain societies to wean earlier. The relative acceptability to infants of cow’s milk and cereal gruels may mediate the effect of subsistence mode on weaning age. The decline of weaning age in !Kung hunter-gatherers as they became more settled and gained access to cow’s milk exemplifies this.

All groups used cereals, legumes, roots and tubers as weaning foods but the Hausas used more cereal products. The cereal paps offered to children by Hausa mothers had higher protein values than those given by Yoruba and Ibo mothers, probably because of better processing procedures. [Nigeria]

Ojibwe legend says that a duck dropped wild rice into a pot of boiling water to show the spirt Nanaboozhoo that a bounty of nutritious grain was growing in the lake. “Where there’s rice, there’s Anishinaabe. Where there’s Anishinaabe, there’s rice,” Winona says, using the tribe’s original name. “It’s the first food of a baby, the last food for an elder. We simply can’t be a healthy people without our rice.”

Other customary rituals included ear piercing, hanging wampum or other ornaments around the baby's neck, and feeding the little one oil or grease.

European observers, hardened to INFANT MORTALITY, were impressed by the fondness shown toward and good care taken of Indian children by their mothers. This quality was nowhere better demonstrated than in the feeding of the infant. Unlike European upper-class parents, Indians did not put their children out to be nursed. If the mother happened to die before the child was weaned the father might fill his mouth with water in which corn had been boiled and pass the liquid on to the infant. Nursing went on for several years. During this time the child stayed close to its mother, usually transported on a cradleboard tied to the mother's back. As the child grew and was allowed to crawl it was carried without a board, again on the back of the mother, who grasped it by one leg and the opposite arm. Weaned at approximately three years ...

Don't look now, but this is a form of "processing" the food.   Hmmm ... why not just feed the corn? Hint: boiling releases starch into the water, salivary amylase breaks it down to gluocse.  But speaking of sugars and babies, many are aghast at corn syrup (NOT HFCS) in baby formulas.  What exactly do you think corn syrup is?  Glucose.  So even though sugar is not necessarily a factor in "industrial" baby cereals, it has a long tradition as a food for babies ...

The above and the one below, from ancient Egypt, are copied from the Mammalian Infant Food post for the sole purpose of demonstrating that sugar is not a foreign or truly modern substance to be given to children.

Both authors described the weaning process as gradual, with supplementary foods being introduced at 6 months of age; weaning was completed by 3 years of age. Soranus specifically mentions boiled honey or a mixture of honey and goat’s milk as the infant’s first supplementary food.

Some Concluding Thoughts and Cautions ...

There is an amazing amount of literature on the feeding of infants out there.  The problems with some of the foods, especially when breastmilk was unavailable, are at least equally attributable to the lack of sanitary conditions.   Feeding apparatus became easily contaminated, let alone finding clean water!  Certain foods have always carried possible pathogens and/or risk ready spoilage.

Many of the paps used are nutrient insufficient -- notably the strains of maize in Africa -- and worse yet can reduce nutrients absorbed from other foods.  Nobody is suggesting that grain cereals make up the whole of a baby's diet.  But Tim Noakes turns a blind eye towards the use of fortified cereals which have a good track record of improving infant nutrition in the "Third World" side of his country -- you know, the areas a bit more remote than the 5-Star Banting restaurants splashed across Instagram at the Low Carb HoHoHo Down.   It is all fine and well to promote the introduction of some meats and fat -- dairy fat in particular is a good and appropriate food for babies in appropriate amounts -- but if these foods are inaccessible to the population as a whole, it is time to stop demonizing the foods that are accessible by calling them "non-foods" (or worse yet, trying to make them unaccessible).

Tim Noakes and his ilk are so wrapped up in blaming Big Food, what with all their documentaries showing pizza, burgers and fries and calling them carbs, that they don't seem to stop and think about what it is they're saying.   They'd rather make up "facts" out of thin air and try to pass them off as if they're true.  Gerber and Nestle didn't cause the current nutritional state of the world by making safe, nutritionally appropriate, baby formulas and foods.  They're not perfect, please don't distill my argument here into an endorsement of every company policy and product.  It's simply not.

Dietary carbohydrate is not only appropriate for a baby, it is likely as essential a macronutrient as fat or protein.  Lactose is a source of glucose for the baby.  It may serve other purposes in the milk, but that is the main one.  Why else would evolution have gone through all that trouble to insure that lactose is so consistent in human milks regardless of the nutritional status of the mother?