From his very first foray into the abyss that is "horrible" nutrition science, right on up through today, one thing has remained consistent for Gary Taubes.  Sure, the alpha glycerol phosphate idea where you can't store fat without dietary carb was blasted to smitherines by his own reference decades before the advance for GCBC was paid out.  Nevermind that billions of white rice eaters countered his insulin spiking notions.  Don't even notice the man behind the fructose curtain, a mirage known as the non-insulin spiking carb.

As any good man of science will tell you, Gary Taubes insists that any hypothesis (and thus any supporting mechanisms) must be able to explain all of the observations.  I agree.  Too bad he doesn't hold his own hypotheses up to even a modicum of his own standards, or perhaps we might be congratulating Peter Attia and Gary on their successful opening of the $40Mil Newcastle-in-America Diabetes Clinic.  But instead, NuSI is pouring millions into getting to the bottom of long  ago answered questions.

Heck, let's listen to Gary Taubes himself.  I've cued the embedded video here to the part I want you to hear (~5 min 14 sec), complete with the reference to "Tufts of all places" for some extra #IRONY.

Taubes' "Adiposity 101" has changed considerably over the years -- stripped of the least defensible of biochemical fantasies.  According to him, the current hypothesis of Calories In exceeding Calories Out is *meaningless*.  This basic template for his lectures has remained intact, and includes a litany of supposed paradoxes.  How can obesity and malnutrition co-exist in the same culture? 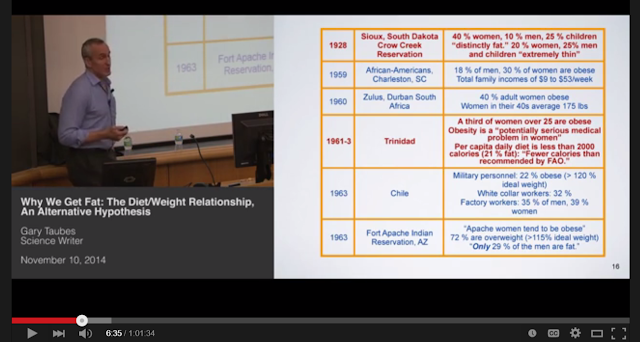 If it's overabundance and eating too much and exercising too little, this can't explain it!  Oddly enough, I don't think I've ever seen a lecture or interview where Taubes has given his litany of cases as shown above, and then proceeded to discuss how his alternate hypothesis does explain these observations.  How does it?  It must be the carbs.  But mostly for the women? Because insulin?  But some are still underweight.  Because also insulin?  Insulin doesn't kick in until age about 25 for the women?

Well, I came across this  2003 review while gathering ammo information for other forthcoming posts:  Stunting and future risk of obesity: principal physiological mechanisms.

There is a fair amount of epidemiological evidence showing that nutritional stunting causes increased risks of obesity. Obesity is increasing dramatically not only in developed countries but also in developing countries, such as Brazil, especially among the poorer. The mere coexistence of undernutrition and obesity among poor people has a great impact, as the burden in the social, economic, and health care systems is remarkable. In addition, an increasing number of studies have shown that nutritional stunting causes a series of important long-lasting changes such as lower energy expenditure, higher susceptibility to the effects of high-fat diets, lower fat oxidation, and impaired regulation of food intake.

... This hypothesis is still under debate, and one strong candidate for this higher susceptibility seems to be early undernutrition, as it could permanently “program” the individual to increase and/or preserve fat stores

What's that?  A hypothesis under debate??  The #IRONY here is that one of the two co-authors of this review is from Tufts.  Nobody there believes in energy balance?  What of hormones?  Here's a pertinent exerpt:

... experimental semi-starvation ...[results in] ... a decrease in insulin, thyroid hormones, sympathetic nervous system, and catecholamines has been described, associated with an increase in glucagon, growth hormone, protein catabolism, and free fatty acids (Shetty, 1999).

Sounds like low carb nirvana, right?  But here's the problem.  This same "starvation milieu" predisposes malnourished babies to obesity.  How?  The mechanism proposed in this review as I will attempt to summarize, goes something like this:

1. Malnutrition -- either in utero and/or early infancy -- triggers the "conservation mode".  These babies (along with premies and LBW for gestational age) will grow very rapidly when supplied with adequate nutrition, a phenomenon called "catchup growth".  The malnourished baby, however, will build less lean (bone and muscle) and more fat tissue during this growth.  This is accompanied by "stunting" -- low growth in length or height -- a phenomenon prevalent in underdeveloped/developing countries.

2.  This "fattier" body composition does not appear to have a major impact on energy expenditure (REE or TEE) between babies and young toddlers, but differences do appear to emerge as time goes on.  These differences seem to perpetuate more in females and disappear in the men.  [My speculation:  Perhaps because boys get a second shot at the lean mass building during puberty, while girls get the double whammy of even more being shunted to fat? Then a triple whammy when they have kids?]

3.  Fuel Partitioning to Fat Storage:  This seems to be accomplished by the creation of a "carb burning" metabolism and "impaired" fatty acid oxidation.   [Note that oxidation is the actual "fat burning" as opposed to lipolysis which is release from fat cells.]    But this does appear to play a role in altering (increasing) intake for size/needs.  Together with reduced EE, an unfavorable energy balance is established and overweight/obesity occurs.

So Taubes is right?  We overeat because we're getting fatter, not the other way around?   There is likely some truth in the case of malnourished babies later in life.  Also, probably, rebounding from extreme calorie restriction.   But notice the impetus is NOT carbohydrate excess, and it is CERTAINLY NOT insulin excess.   Also without the calories, the obesity cannot result, hence in true poverty where there are no interventions to provide food, obesity does not develop.

This meshes well with what I called the Insulin Paradox.  Low insulin -- either from calorie restriction or low carb/ketogenic diets -- favor fattiER body composition.  As time goes by, this favors positive energy imbalance and if you provide sufficient calories, weight/fat gain is favored even moreso than  it otherwise might be.  This is the dietary effect on hormones.  In the end, it still comes down to energy balance, but in the body composition wars, which approach should you choose?

New Diet Taps into Pioneering Plan to Help Dieters Get Rid Of 20 Pounds in Only 21 Days!

Using EasyHits4U you can earn free advertising credits by viewing other website-ads from a account base of over 1,200,000 accounts. Earn credits fast with a 1:1 Exchange Ratio.