If Fat Doesn't Make You Fat, Explain Tokelau vs. Pukapuka

- June 25, 2017
In light of the recent brash of coconut oil articles following the Dietary Fats and Cardiovascular Disease: A Presidential Advisory From the American Heart Association, I thought I'd bump this post.  Of course all the coconut oil advocates are up in arms over this.  Mind you, coconut oil is the most nutritionally bereft oil out there ... "empty calories".  This post discusses a study in the Sixties on two Atoll island populations that live in virtually the same environment, etc. but with nearly opposite diets in terms of total fat content, where the majority of fat comes not from coconut oil, but the more nutrient dense coconut meat and embryos.


One Line Summary:  The increased fat content in the Tokelauan diet correlates in increased adiposity in this population as compared to nearby Pukapuka.

While the cited study abstract says the following:

Vascular disease is uncommon in both populations and there is no evidence of the high saturated fat intake having a harmful effect in these populations.

... it is important to point out that they did not assess atherosclerosis in any direct fashion, only looked at  TWELVE ECGs .    The oldest participants numbered roughly 30 in each top age group of age 55-64.  This paragraph is the more accurate to quote:

The influence these traditional diets may have on development of atherosclerosis is an important question. Twelve lead ECGs have been taken in both groups and the rate of subnormal Q waves, Minnesota Code 1 ı and 12 was very low in both groups. The samples of adults on the two atolls are, however, too small for definitive studies of coronary heart disease and vascular disease.

Here are the cholesterol differences as reported in the paper.

Even if this study demonstrated a lack of CVD in its aging populations, this still tells us nothing about the healthfulness or wisdom of consuming refined coconut oil in the context of modern diets.  Everything from putting it in coffee with butter to frying "paleo starches" in it bears no resemblence to the traditional dietary context in which both the Pukapuka (to lesser extent) and Tokelauan (to greater extent consumed whole coconut.

What we do see, definitively, is a progressive and distinct trend toward greater adiposity in the higher fat culture.  It is no major leap of logic to see where this could lead with even minor deviations from the traditional context.

When looking at traditional diets and trying to draw some generalizations about the healthfulness of the diet, or the impact of its nature on body weight/composition, it is often helpful to find and compare populations that are similar in all other aspects.

In the IHC, a common example of such a comparison is the Masai and Kikuyu of Southeastern Africa (Kenya and Tanzania).  Although these characterizations may often be oversimplified and even erroneous, these two tribes inhabit similar environments, while one consumes a mostly animal based diet compared to the near-vegetarian diet of the other.  In the South Pacific, a region often referred to as Oceania, we have the inhabitants Tokelau (red arrow) and the Pukapuka (blue arrow, part of Cook Islands).
The two island systems even look a bit alike!   In the IHC it is common to contrast the Tokelauan with the Kitavan, likely because there is more literature on the Kitivan courtesy of Staffan Lindeberg.   These comparisons are not unwarranted, but due to the proximity and similarities between the Tokelau and Pukapuka, the comparison/contrast there is even more compelling.

Cholesterol, coconuts, and diet on Polynesian atolls: a natural experiment: the Pukapuka and Tokelau Island studies

The dietary data in this study came from 1964 (Pukapuka) and 1968 & 1971 (Tokelau), anthropometric data is from 1964 (P) and 1968 (T).  This post will discuss only the diets and their relation to body weight and composition in these two populations.   (If you wish to discuss other aspects in comments, feel free, but I doubt I'll be able to participate at this time.)

As summarized in the abstract, these two populations are almost opposites in terms of their coconut vs. starch consumption.

Interestingly, despite close proximity and geography, it is stated in the text that even the starch staples differ between the islands.  The Pukapukans supplement their taro with imported cereal and consume almost no breadfruit, while Tokelauan consume mostly breadfruit with very small amounts of cereals.  The major difference is that the Tokelauans consume almost twice the amount of coconuts as do the Pukapukans.  This results in the following approximate energy/macro intakes:

Of note, averaging P:F:C of 13:36:51, the Pukapuka are comparable to many reported Western macros, and not nearly as high carb as the Kitivans!  Their protein is a bit lower, as is that of the Tokeauans.  With protein content roughly the same in both islanders, this makes for a nice "controlled experiment"!   Also of note, the Tokelauan P:F:C percentages of 13:53:34 while qualifying as high fat by usual nutritional standards, barely make the grade in #LCHF circles and the carbs are way too high at around 200g/day to be considered low carb.  Comparing carbs and fats between groups, I'd note that while the Pukapukans do eat some more carbs, the bigger difference resulting in the Tokelauans eating 3-400 calories more per day comes from fat intake almost doubling in absolute amounts. 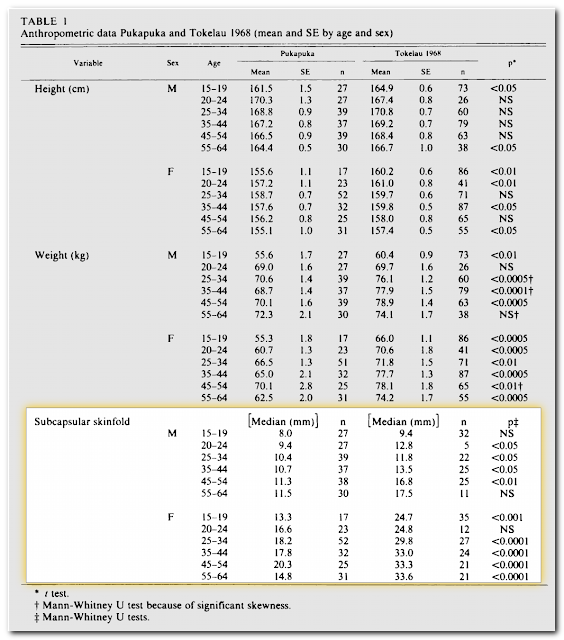 The Tokelauans trend (sometimes reaching significance) towards being a bit larger overall, particularly the women, as compared to the Pukapukans.  That is they are both a bit taller and heavier.  BMI data is not provided but likely their BMIs would "shake out" roughly similar.  Now a super accurate body composition was not done, but a skinfold test for body composition was conducted.  I have highlighted this because with the exception of the teenage males, the Tokelauans are fattier at 20 than the Pukapukans are throughout their adult lives.  I would note that the upper age bracket only extends to 64.

This study came to my attention (again) a few months ago when a now infamous thread was posted on Facebook requesting feedback on the following article on T Nation by one Bill Roberts:  The Fat That Makes You Fat.  (I would otherwise encourage you to read the comments on the FB post for some really great input and study links, but FB is not user-friendly allowing one to view older comments first.  Therefore whatever worth is in there in the first 500-1000 comments, and smattered throughout the now 14,000 and counting is now swamped out.  I check in from time to time as I suspect others do, just so we can pop the island image back into the newsfeed and up the comment count ;-) )

This article is not out of line with a certain segment of the IHC that believes PUFA in general, the omega-6 linoleic acid in particular, are fattening.  Furthermore, many of these same folks claim that saturated fats are not only not fattening, but you can't eat enough of them as they are so magically sveltifying!!   Although his article is not formally referenced, Roberts alludes to this study as evidence that PUFA and LA make one fat.   However the study and the results demonstrate, if anything, the opposite.  Furthermore, although I didn't discuss this in this post, fat tissue biopsies were taken and examined for fatty acid content.  Roberts contends that LA levels in fat can be a lingering issue.  While both levels are low, levels of LA in the Toukelauan fat (3.8%) are slightly higher than in Pukapukans (3.2%), and surprisingly both are a bit higher than the 3.0% in European-descended New Zealanders.

The increased fat content in the Tokelauan diet correlates in increased adiposity in this population as compared to nearby Pukapuka.  It is worth noting that it is the Pukapukans who are, if anything, more "corrupted" by the refined cereal grain imports they rely on as a result of poor growing conditions for some staples.  Yet the Pukapukans are not fatter nor fattier as a result.

Lastly, not only does the degree of saturation of the fat appear not to matter, the fact that coconut fat is roughly half medium chain triglycerides does not seem to be protective against adiposity.  At the very least, the tale of Tokelau and Pukapuka should lay rest to any magical metabolic fat burning powers of the exalted coconut oil.   The Tokelauans are fat burning beasts no doubt, but they still store body fat in higher proportions than their neighbors.  Could it be that the Pukapuka burn less fat, but it doesn't matter because they burn the fat that is stored and released from their fat tissue?

Disclaimer:  I have used the term "fat" for effect here.  I doubt that compared to most Westerners, the Tokelauans would appear overweight let alone fat.  But even eating their #realfood #wholefood #healthysaturatedfats #magicalcoconut #nutrientdense #locallygrown #lowercarb #highfat #lowglycemicindex(?) #fiber #happygutflorapromoting diet, they aren't able to claim escape from adiposity!

UPDATE 5/25/16:  In 2016, a pair of medical doctors hit the best seller lists with "new" rehashed diet books touting the satiating properties of fat and hunger promoting properties of carbs.  These would be Mark Hyman of Eat Fat, Get Thin, and David Ludwig of Always Hungry.  The premise these books is nearly identical, based on TWICHOO (Taubes Wrong Insulin-Carbohydrate Hypothesis Of Obesity) and both insist that if you just eat more fat you will eat less (not seen here) and accumulate less fat.  This is clearly not the case in this real life natural experiment.

The meaning of this is that you actually burn fat by eating Coconut Fat (including coconut milk, coconut cream and coconut oil).

These 3 studies from large medicinal magazines are sure to turn the traditional nutrition world upside down!
August 23, 2017 at 5:48 AM