Recently I shared some "blinded" study results from a real study conducted on two strains of mice, each studied after eating one of two diets.  More correctly these mice are of the same strain, but one set has a mutation in the brown fat cells.  I did this along with some simple -- obvious -- questions, and then a more open ended question regarding interpretation.  I intended for one more installment, but I think it just got tedious, so I'll incorporate that into this reveal post.

So from the first post, here is the data I provided: 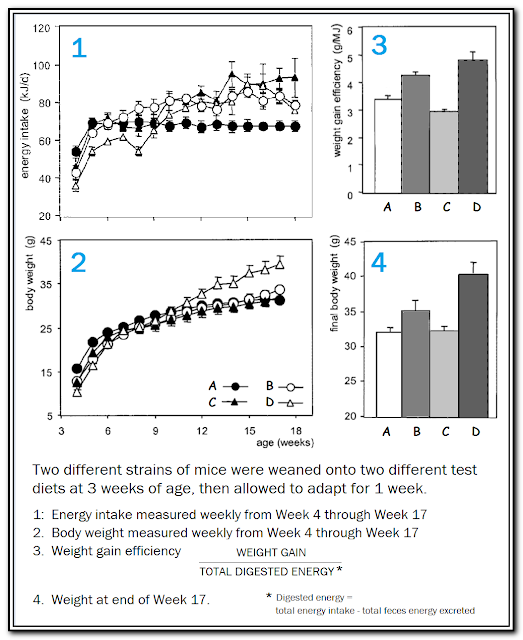 This data was not altered, although I selected only a few of several plots to highlight, and did rearrange the orders of the bars from the original comparisons so someone familiar with the study or drawing usual inferences in orders, might be better blinded.

As to which mice gained the most weight, this is clearly Mouse D.  These mice started out at a slightly lower weight than other mice, and from about week 12, began to pack on the grams a bit more than others.    In fact, the other mice are so similar that their weight trajectories are "the same", and even D is "the same" going into the fourth month of the study.

Next I asked about the consistency of intake.  I inadvertantly caused some confusion by giving the incorrect (flipped) formula for weight gain efficiency in my original image (fixed).  I perhaps shouldn't have included the data at all, but was planning to do some interpretation with that (maybe some day, not in this post either, sorry).  More to my point, I was getting at the shapes of the intake plots.  In this case, Mouse A seems to have the most consistent intake.  It ramps up post weaning, and remains pretty constant.  The other mice seem to bounce around a bit, though intake does level off a bit higher in gross energy intake. 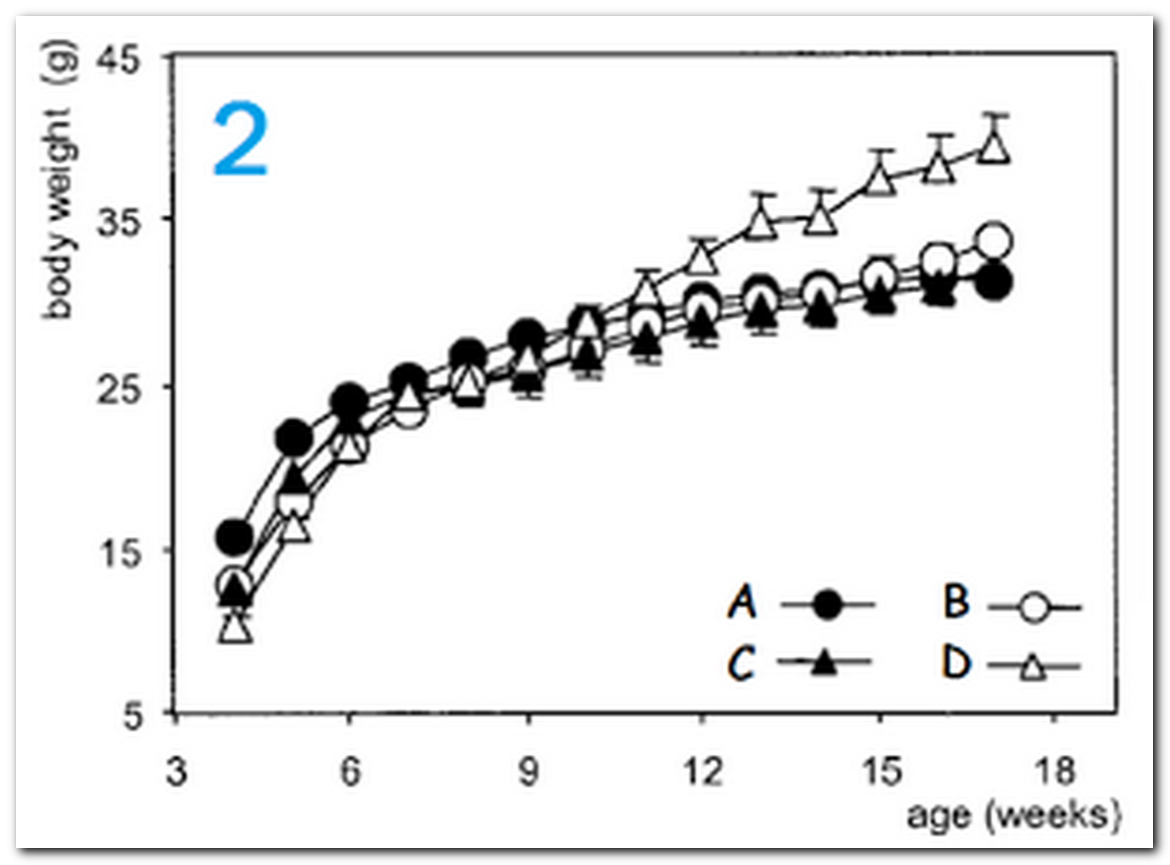 In the second part, the questions were a bit more involved, but here is where the blinded thing perhaps loses its full value.  Still, I focused on the weight vs. time plot and revealed at least something about the pairing.  Our susceptible Mouse D is like C in one variable, and like B in another.  Mouse A is therefore the other mouse type on the other diet type.  So I asked what conclusions could be drawn for either of the scenarios, and I'll answer that now as well:

1.  D & B are different strains of mice on the same diet, thus D & C are the same mouse strain on a different diet.

2.  D & C are different strains of mice on the same diet, thus D & B are the same mouse strain on a different diet.

Now these are straight forward "problems", but there really are no definitive answers with the constraint I imposed:  Ignore A.   Mouse D gains more weight than B or C.  In the comparisons of the same strain on different diets, this implicates the diet as the causative agent in the weight gain.  In the comparisons of the same diet on different strains, it is the genetic anomaly that is implicated as the causative agent.  But you see the effect by altering only one variable.

So now let's add Mouse A into the mix.  I would conclude that one diet is potentially causative of weight gain compared to the other, but this requires some genetic susceptibility to this diet.  Another way to look at it is that one type of mouse has a metabolic defect that is potentially causitive of weight gain/obesity,  but this requires a triggering diet to manifest.  Put yet one more way, you need both the diet and whatever genetic anomaly the mouse strain has in order for the mouse to gain the weight.

The mice in this study were actually littermates where a genetic defect occurs in some of the offspring.  Therefore, these mice have the same "genetic background" but for the inbred defect.  The background strain is the FVB/N mouse, and normal mice are called WT = wild type.  The transgenic mice = TG are UCP-DTA.  They basically have their uncoupling protein (UCP), the thermogenic part of their brown fat, knocked out by a diptheria toxin A (DTA).  Who cares how they do it, really, just that these mice are essentially missing the ability to "burn off" extra calories via thermogenesis (or at least a major means to waste excesses).   All of the mice used were males.  Of importance (from the study text):
So WT and TG littermates were weaned onto one of two diets after three weeks.  The "experiment" began after a one week post-weaning adaptation, Week 4.  Data was collected weekly through Week 17.    Here are the diets: 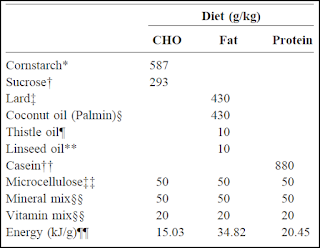 So as far as diet is concerned:
So, here are the results:

So now that we're unblinded what can we say about obesity, macro ratios of diets, and genetics?  The mutation is not enough to cause this mouse to get fat when fed a "standard" rodent diet.  The very high fat (and highly processed) refined macro CD was not enough to induce obesity in the WT mouse.  Put the diet and the genetic "handicap" together, and the TG-CD mouse got fatter (although we're told the obesity was less than would be expected on your usual "Western" HFD chow used in DIO studies).

What was "surprising" is that these mice did not become "metabolically deranged" and/or diabetic.  Alas any detailed discussion on that must be for another day, but I'll share a few thoughts in closing.

Some Limited Commentary on the Conclusions:

In order to do this study justice, it would really require a separate post.  There are a number of factors at play and if -- that's a very big if -- the results are translatable at all to human metabolisms, they imply the opposite of how they've been interpreted by at least two members of the paleo community.   There are lessons for metabolic regulation, weight determination, etc.

But ONE mouse type got fat, the transgenic mouse eating his preferred macronutrient ratio:  He gained more weight, and virtually all of this excess weight is in the form of accumulated lipid -- presumably in adipose tissue (I'd have to look again, but the method used may not distinguish between adipose lipid and ectopic fat).   This mouse got fat -- was able to store/accumulate dietary fat -- despite consuming virtually no carbohydrate and roughly half the protein compared with a standard chow.  For whatever reason, this background mouse strain prefers fat to carbohydrate normally, but this preference is enhanced -- eat more fat -- when there's a problem somewhere in the fat metabolism.  Letting the mouse do this resulted in unmasking the genetic predisposition.

As to the metabolic outcome -- specifically that the obesity was not accompanied by diabetes in the TG-CD mice -- I've seen a few offhand claims that this is evidence that you need the carb to cause the diabetes.  I'll expand at some point as time allows, but this would really be a simplistic interpretation.  I'm quite curious to track down other studies on these mice for some answers here.  Feel free to chime in in comments.  I've got a new phone that may even allow me to not only read comments "on the fly" but actually respond (I hope!) ... let's see how that goes!!

On Macros, Appropriate Diets and "Fattening"

I think it's safe to say that many in the IHC regard the so-called "high fat diets" used in rodent studies as unnatural diets for these species.  Nutritional science is not so backwards that laboratory chows are going to be made in such dramatic discordance to the composition of the natural diet of an animal.   In other words, the natural diet of rodents in the wild is generally a rather low fat, moderate protein, high carb fare.  But a homogenous chow -- often comprised of a single type of processed macronutrient/ingredient (e.g. starch, lard, casein, etc.) -- is still different than a wild animal would ever encounter, even one that has taken up residence in a comfy home or bag of grass seed ;-)

The CD in this study is nothing even like this.  Even though efforts were made to standardize the micronutrient content and bulk (cellulose), we're not even talking *foods* here.  It is interesting that provided with such a diet, mice will consume a LOT more fat, and very little carbohydrate.  (Dare I point out the kibosh this puts on the addictive carb/sugar hypotheses?!  These mice are free to mainline and yet, they take a pass.)  They also either don't like casein that much, or they don't need as much protein as some chows are formulated to contain.  Who knows.  I'm struggling to see where mice eating isolated macros to taste has any bearing on what the "natural" diet of a species is.  After all, the CAF rats "naturally" selected human junk foods over chow!   Further, how this translates to humans formulating a real food diet truly escapes me.   A rodent might prefer sugar mixed in butter, but is this even a food they could ever encounter without human intervention?  NO!

In these mice, a defect in fat metabolism doesn't impact weight when they are fed a more macronutrient appropriate diet.  However, this defect is "unmasked" by a high fat diet, even one that doesn't promote fat gain in a normal mouse.  In the end, IF this is analogous to any human condition -- again a huge IF -- it demonstrates that fat can make you fat, even in the absence of carbs.

I'm going to publish this up now.  I hope to get to the IHC angle in which this study is being abused sometime soon, as it also demonstrates the problem of co-opting ideas from others without even bothering to skim the original sources for ones self that is rampant in this community.  Not only is it rampant, but it leads to the frustrating habit of repetitive MISinformation in a community that is ill-suited and utterly unmotivated to police itself.  I'll keep this on the back burner next time I do a calorie balance and/or diabetes post to share some thoughts on the relevance to those issues here appropriate.  If/when I do, I'll try and remember to track back here and link up the follow-ups.

On EasyHits4U you can earn free advertising credits by viewing other ads from a user base of over 1,200,000 accounts. Earn credits faster with a 1:1 Exchange Ratio.