Summary: You can reduce the percentage of one item by increasing the total amount of all items.  This can give the illusion that you've reduced the amount of the item in question, but is just that ... an illusion.

That previous post on this was inspired by yet another round of Fun with Numbers, this time courtesy of David Ludwig and Dariush Mozaffarian in JAMA ... and now the NYT   (I'm beginning to see a pattern here.  NYT is the publicity outlet for all JAMA editorial nonsense, much like Time is the outlet for BMJ's Open Season on Science Heart journal.)


On Facebook I received the following response to my first post of this title:  (not on public page so shared anonymously)

As an Accountant it's always a red flag when people just give percentages or even worse when in the same document give percentages part of the time and raw numbers other times. It's an obvious sign they are presenting the information in the best way to support their position.

Whenever I get a proposal like this (it's usually to spend $) it usually takes about 5 minutes after analyzing the raw data to determine that the numbers don't support what the project paper claims and the project gets shelved.

In most of the cases there was a deliberate attempt to hide or distort the data. It's never incompetence, usually deceit.

This echos my sentiments exactly!!   Don't get me wrong, percentages are useful values but are often abused as indicated above.   When comparing pies, they must be for the same size pie!  Otherwise they are meaningless.

In promoting the notion that the real problem in America is some mythical ceiling on fat consumption the pair of Boston based "nutrition experts" resort to your typical mathematical contortions with percentage math.   (Seriously, I have a post in the works, this is beyond absurd and should not be coming from academics ... $omething is behind this and I don't think it's senility setting in.  I've come to expect this from Feinman and Harcombe and Hite and Teicholz, but these two?)

MacSmiley asked Mozaffarian on Twitter about this and this was his response:

The picture in Melanie's tweet came from this blog, and I'll include this updated version that I created specifically for the forthcoming  Ludwig & Mozaffarian piece.


Let's do the math magic for Mozaffarian's example:

Now my first question is why is Mozaffarian authoring articles that even imply that low fat diets are dangerous if he's eating under 25% calories from fat ... but let's presume this is totally hypothetical.

Grandma Mozaffarian is eating less fat than her grandson in this scenario, not more fat.  The percentage is irrelevant and 50 grams is less than 75 grams.  But let's look at this a few other ways.

The answers to the above bolded questions would be -- or should be -- a head-shaking "are you serious?", and yet serious people from Tufts and Haahvaahd are telling you just this.  The only scenario where the question can be answered with "yes", is the blue bolded one. 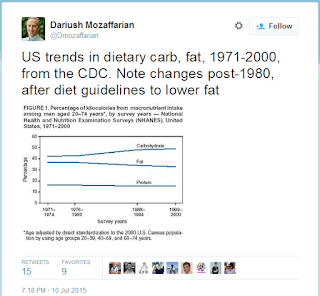 But as if to almost throw down the gauntlet, Mozaffarian tweeted this yesterday, screenshot right.

Second, a serious issue.  Why show part of the picture all the time?  Trends in energy intake among adults in the United States: findings from NHANES (note authors are affiliated with the CDC but did not write this in their official capacities)

Here is the full picture.
One more for you, that was also brought to Mozaffarian's attention.  This one I'll embed as I don't think it will be going poof in the night.


Stop the deceit please.  It is most unbecoming.