Should the "Intellectuals" Be Given a Pass on Dishonesty?

Sometime in June of 2010, I wrote the following words about Gary Taubes:

I'm left to conclude this man is totally bereft of intellectual honesty.

Supporters of Taubes jumped at this and claimed I had called the man a liar.  A willful fraud.  But at that time I had never used those words.  I don't believe I flat out accused him of lying until December of 2010 in response to his defense of his then new book Why We Get Fat.  I still try to avoid those words, if only because of the flack I receive when I do.  And yet, the qualifier "intellectual" has been bothering me a lot lately.

Intellectual Dishonesty:  "When one avoids an honest, deliberate and comprehensive approach to a matter because it may introduce an adverse effect on personally and professionally held views and beliefs."


I've always used the term in the context of things someone says or does in a professional context, or in a particular role as an expert of sorts.   In doing so, my intention was to separate such a charge from a person's entire character.  Taubes may lie through his teeth about insulin all day, but that doesn't mean he cheats on his wife, steals his neighbor's paper, pilfers office supplies from NuSI or hoodwinks his friends into signing up for a life-sucking MLM scheme.   I have no idea how the man comports himself in his personal life, or outside the IHC, and frankly, it's irrelevant and I don't give a darn.  Not where the matters I discuss on this blog are concerned.  (But please, don't stop sending me those juicy gossip tidbits, I love the inside scoop as much as the next gal!)

No, my concern is that the qualifier "intellectual" is interpreted to imply that the dishonesty is somehow justified ... that "intellectual dishonesty" has become a euphemism synonymous with "the ends justify the means".   The idea here is that we can rationalize dishonesty "for a cause".   But when you think about it, who actually lies for no reason?  I'm sure there's some pathology for random chronic lying, but even the most harmless fib is for a reason!   And I think we can all agree that there are different levels of lying and the reasons for it.  Let's say you are a married woman.  Question:  "Are you married?"   Possible answers:

I could rattle off a dozen more, and all no responses would be dishonest, but not all dishonest responses are equally reflective of your character.  Things such as "nobody gets hurt" factor in, and the interview scenario has an anti-discrimination motive built in.  One more scenario:  A person who engages in deceitful sales practices at their job.  We would judge this differently depending on, for example:
My point here, without going too far in depth, is that there can be any number of reasons for being dishonest that can more or less acceptable given the circumstances.    The problem with that, is where exactly do we draw the line?  I don't think there is a line, and I sure as heck don't have any one golden rule.  In the end, we each judge for ourselves in who we choose to associate and do business with.

So where do you draw the line, intellectually or otherwise?  There may be numerous times in life where we simply don't have enough facts to know for sure whether or not a person is being truthful.   But one situation where I think we should at least be able to draw some rather bright bold lines is when the person is "caught red handed".

I cut down a whole section about politicians for the sake of brevity here, but here's the distillation.  Dishonesty and politics have a long history of going hand in hand.  Heck, we almost expect our politicians to lie to us at some point!  Broken campaign promises anyone?   We take consolation in that it is the nature of the beast and we tend to let those on "our side" slide a bit more than the "opposition", even though we know better than to apply double standards.  But there was a time when a politician got caught -- pictures, videos, tapes, public statements, arrests -- and  (s)he would own up, apologize, and exit the political stage.  And if (s)he didn't do it voluntarily, they were coached, and in some cases eventually run out of office by their own supporters.  Sometimes with some modicum of dignity intact, sometimes in total disgrace.   On very rare occasions, some of these folks managed to redeem themselves and return to the public stage.  To use a relatively recent story as an example ... that was then, and now we have Anthony Weiner.

They say that it matters more what a person does nobody's looking than what they do when someone's watching, or at least they think someone is.  This is true.  I would add to this that a person's "truthfulness quotient" during the usual course of events may never be quantifiable in any objective manner.  But what that person does when they are caught lying is the ultimate test of their character.   Do they:
For me, this is the real litmus test.   Because dishonest people always get caught.  Eventually ...  And what they do when this happens really tells you more about their character than if you suspect jaded motives but can never know the truth on that score. 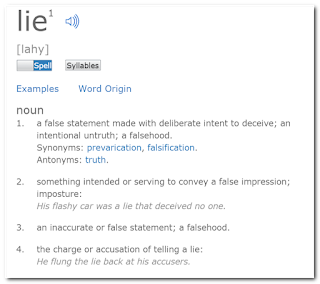 What is a Lie?

Everyone knows what a lie is, but for the sake of argument, here's the dictionary definition.   Perhaps the less definitive definition we're after is more along the Clintonian lines of "it depends on what the meaining of the word is is" ... something like "when is a lie a lie"?

In the realm of science this is rather more simple than many make it out to be, though you can never know with certainty.  But when making scientific statements, the oath taken in a court of law is appropriate.  They should tell
Translated to the scientist or someone presenting themselves as a science-based expert this means they should present
In presenting the evidence, a truthful person is careful to paraphrase or quote others in proper context so as not to distort or alter the meaning of the original source.   A truthful person makes a good faith attempt to examine the whole of the evidence, and is diligent in doing so especially when attempting to overturn existing consensus.  And lastly, a truthful person doesn't embellish the evidence with rank speculation at any time, and when they do share their reasoned speculations they are careful to indicate it is their opinion.  There is nothing wrong with speculation, so long as it is not presented as fact.

In case anyone's wondering what sparked this post, there's been a new spate of "carbs turn to fat" stuff on social media, blogs and in peer review to pile on top of the never ending parade of "everything you learned was a big honking lie" nonsense and Johnny Come Lately regurgitations of long-since debunked passages from Good Calories, Bad Calories.  It really shouldn't have to be this way.

There are many liars in what I call the IHC - the Incestral Health Community.   Yes, that is a harsh word, but readers of this blog know that I have never used that term lightly.   But I'm going to call it as I see it in one more way than I've already done.  That is, I'm not going to tip toe around with qualifiers like "intellectual".

Is There an Intellectual "Get Out of Jail Free" Card in the Honesty Department?

Not only that, if you communicate ideas from a position of authority and knowledge, get your ducks in a row.  Stop mindlessly quoting and repeating something you read in a diet book or some blog -- that includes here by the way.  I try to clearly cite references and link to full content whenever possible because I want people to have the primary facts at their disposal.

If you're one of the few doing primary research, take a step back to re-evaluate if the results keep failing to pan out as you hoped.  If you've been selling a gimmick that turns out to be not-so-science-based after all, own up to it.  Yeah, I know that would or will be really tough to do.  It may dramatically impact your reputation and/or your wallet.  But the used car salesman who practically gives away a gem of a vehicle to a homeless man so he can get to his new job is not "saved" from the misdeeds with the aforementioned nun.  You may think you're helping people.  You may even be helping some people.  But if you are lying in the process, you are ultimately hurting someone, perhaps countless more than you have helped.

This ending here may be strangely formatted, but I'm going to close this with bullet points.  In the IHC
There are more.  I could call out many many more liars.  The list is long and "distinguished".  I'm tired!  Got other stuff to attend to.  Oh wait!  I almost forgot.
Nobody believes you. 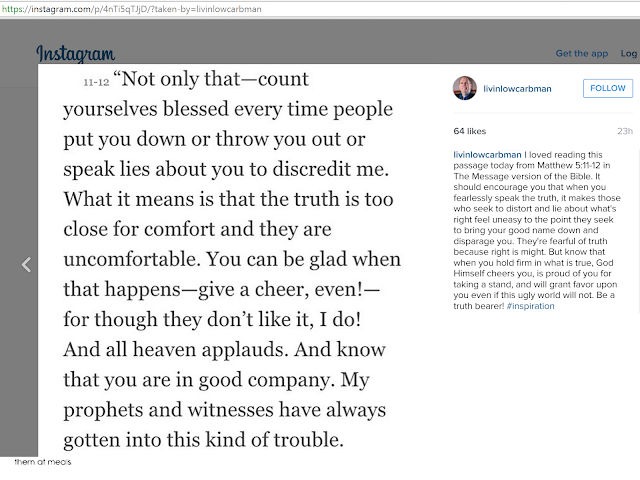