- August 24, 2015
I have conducted a systematic search on my Twitter notifications for all people who have retweeted a tweet in which my ID has been mentioned.  I then narrowed it down to tweets in which inaccurate claims were made about me and furthermore to whether the retweeter had subsequently blocked me.

@zbysfedo O dear. I saw CS deleted all your comments from her blog. Expected a lot, but not that. @CarbSane @Ezzoef
— Melchior Meijer (@PolderPaleo) August 22, 2015

I'd draw you all a funky flow chart, but it's not really worth my time.  I did, however construct this nice table.

Conclusion:  Inability to answer to criticisms based on the merits of their study.

Despite dropping the name and acronyms a lot, Fedorowicz did want to make certain on Twitter that this was NOT a Cochrane Review.  Well, at least there's that in the organization's favor.

Here is the full text of my "evidence": 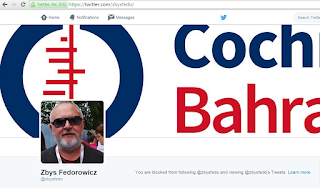 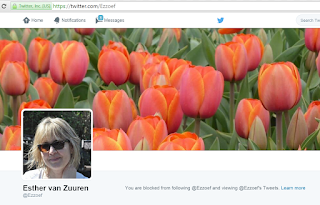 There's one red mark of inconsistency in that Esther van Zuuren didn't favorite the tweet.  Perhaps had he not blocked me, Zbys would have seen that I emphatically set the record straight on who deleted what, but the accuser was responded to and tagged both Zbys and Esther.  Regardless, Ruri Zbys Fedorowicz deleted his posts.  (I'm thinking this is a joint account/ID with his wife). 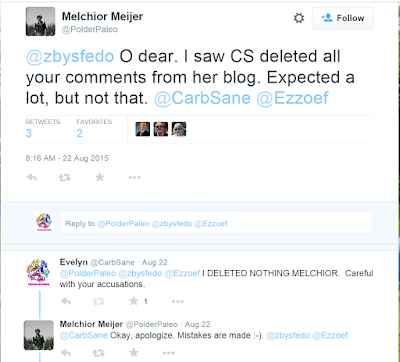 All comments can be read on the original post -- That Paleo Meta -- or the Disqus thread.  Zybs shows up as Guest.  Furthermore, it appears as if Zbys went on a bit of a deleting spree elsewhere.  You can see below is a screenshot taken this morning of comments on an interview with Dan Pardi and my "printout" of a few days ago. 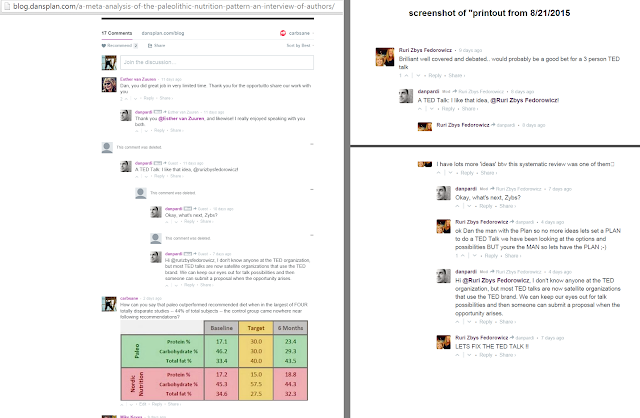 One wonders if the Disqus profile was simply deleted?  I'll have more to say about the interview at that link (which was with the fourth author Hanno Pijl MD and EvZ).

The whole thing is somewhat revealing as Zybs initially tweeted out my blog post?!

Here's a screenshot in case he deletes it.  Note that Esther van Zuuren retweeted this as well.   I guess they didn't actually read my post until I chided Zbys for being more interested in exposure and media buzz than discussion or even reading what's written. 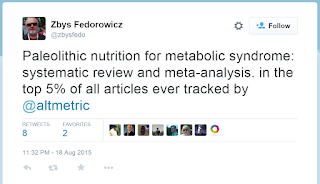 My retweet no longer shows his tweet as I've been blocked.

Just goes to show that sensationalism trumps science in the dogmalternate universe. AJCN should be ashamed. https://t.co/aRcSYP4ReK
— Evelyn (@CarbSane) August 21, 2015

Ahh whatever happened to the rational Melchior of early Asylum days.  Some more interaction: 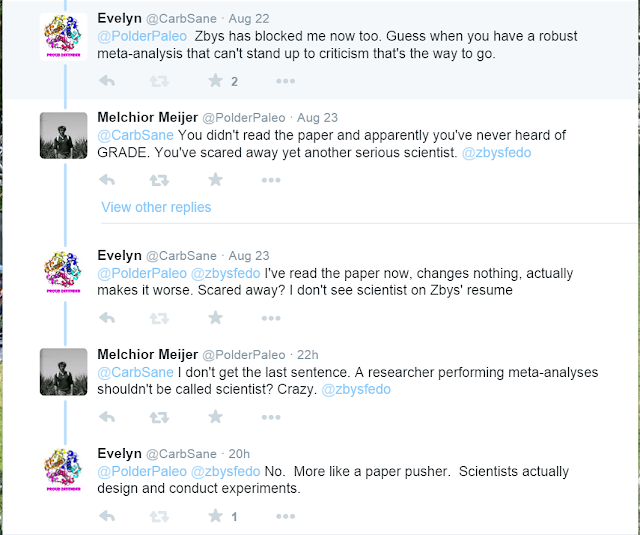 I stated this in my blog post and my reasoning.  Let me clarify the reasons if they weren't clear then.  The "state of paleo nutrition research" is simply not at a point such as to warrant systematic review and/or meta-analysis of pooled data.    Therefore, talking Cochrane methods and acronyms and such only deflects from this core point. 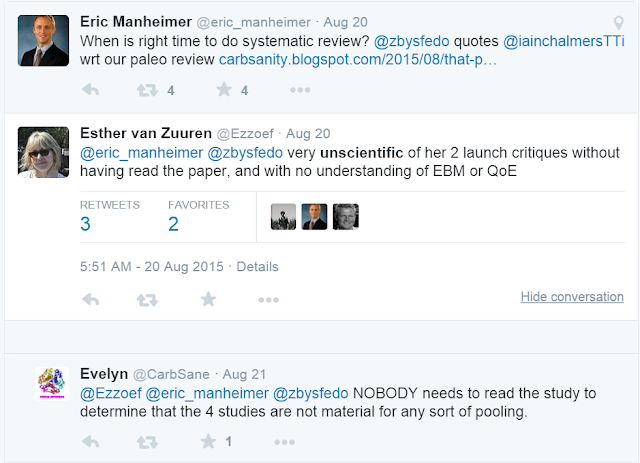 They didn't have anything to analyze if they had implemented ANY inclusion criteria beyond "Is it an RCT?".

It is bizarre that Fedorowicz would withhold sharing the full text with me ... the excuse being that it's EPUB?  Nonsense, as I was able to get the full text, I just didn't want to bother my source with what I consider to be a frivolous issue.

But this boils down to these three of the study authors dismissing a critique without taking the time to read it.  I posted the summary table, and still nothing.

If Cochrane reviews are anything like what these Cochrane reviewers did here, there's serious reason to question their gravitas.  The GRADE assessment does not seem to address the intervention itself, only randomizing, etc.  The subjects in Mellberg did not adhere to the intervention, so as far as I'm concerned, the quality of the data in that study is very poor.  This is not addressed in the full text.

Per my last tweet two conversations up, I've looked a bit into the background of the authors of the meta analysis.  One comes away with the impression that we are dealing with advocates for Complementary Alternative Medicine, CAM -- which fits right in there with paleo.  Folks in the U.S. will be happy to learn that their tax dollars funded this exercise:  Supported in part by the National Center for Complementary and Alternative Medicine of the US NIH (grant R24 AT001293; EWM).   Eric Manheimer is an integral part of Cochrane's own CAM Field.

The Cochrane CAM Field is an international group of individuals dedicated to facilitating the production of systematic reviews of randomized clinical trials in areas such as acupuncture, massage, chiropractic, herbal medicine, homeopathy and mind-body therapy. It is a member entity of the Cochrane Collaboration, a worldwide organization that prepares systematic reviews of all kinds of healthcare therapies, and publishes these reviews in The Cochrane Library.

This is disturbing.  To me anyway.  While I'm all in favor of evidence based practices, if this review is in any way reflective of the quality of studies pooled together in support of these practices, this really draws the Cochrane name into question.

Eric Manheimer was a Philosophy major undergrad, and got his MS and PhD in Epidemiology.   His thesis is available at my link, it was some work in the field of and systematic analyses.  He seems mostly interested in accupuncture.   He is not a research scientist and there is no indication he ever was one.

In his bio on Loren Cordain's website, we learn {emphasis mine}:

Systematic reviews have the potential to make healthcare treatment and policy decisions more rational by basing them on current evidence from randomized trials. Systematic reviews can also document the scientific evidence for treatments popular with the Public but not currently endorsed by health care systems, for example acupuncture and the Paleolithic diet. Eric has been involved with the systematic review movement full-time for nearly 18 years, working on behalf of the Cochrane Collaboration.

The word movement is troublesome.  These reviews should be used to collate information, etc., NOT to promote an agenda.

Esther van Zuuren is a Dermatologist.  Her profile shows no special training and certainly zero experience as a research scientist.

Zbys Fedorowicz has a Masters in Public Health and has a Doctor of Medicine in Oral Health.  Again, there's no evidence of experience as a primary researcher.  He heads up Cochrane Bahrain.

Though not included in the shenanigans, Hanno Pijl, is also an MD specializing in diabetes.  Again, no evidence of primary research in his background, and we all know doctors learn nothing about nutrition.  (grin)


When You Can't Stand By Your Study, Label a Troll

I'll leave you, for now, with recent tweets by the trio of scientologists.  I can only presume that they are diverting from their recent public debacle.  It is a LIE to even imply that I deleted comments.  Fedorowicz KNOWS that.   I'm calling the three of them on this. 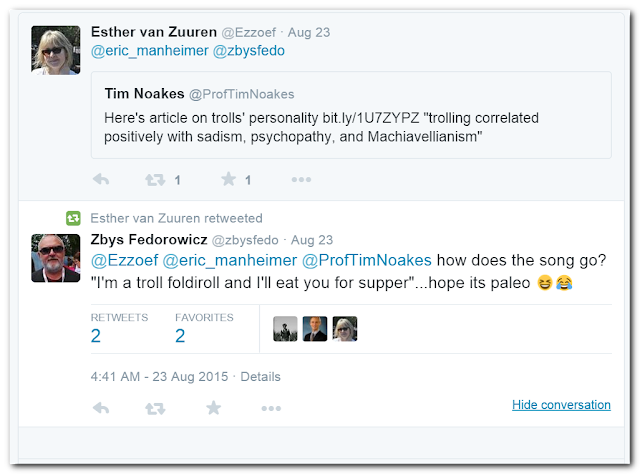 I will be doing a followup post on the full text.  In the mean time, here's more from Kevin Klatt at Nutrevolve!  Check it out:  That Paleo Meta-Analysis That Somehow Was