- September 20, 2015
Minor Update:  Sorry, sometimes I hit Publish instead of Close when I'm in a rush and want to make sure I have most recent version saved.  I had intended to include this video -- Instant Ketosis -- along with this "report" on the MLM angle in my post -- Pruvit Review – Another Ketones Based MLM Company?   My first thought from that title is a question:  "There are others?"  The tagline on this article reads:


Will Pruvit's core products and MLM-modeled opportunity have what it takes to make it in the ketones health space? Let's prove it one way or another for you.


I want to also make very clear that I am NOT encouraging anyone to get into this or any other MLM -- matters not the code words used to sell something.  Indeed I warn strongly against such.  If you search on MLM truth, or MLM scams, or MLM fraud, or any number of short phrases, you'll hit on ... well hits too numerous to count.  Here's one I suggest:  MLM-theTruth.com 5 Step Eval

Furthermore, if you're still tempted by any MLM pitch, look into the people behind the MLM.  Chances are you'll find they were involved in previous MLMs and often in very diverse fields.   For example, Logan Stout -- who heads up the "paleo" (as in Paleo f(x) Norrises and others) MLM IDLife -- has a long list of Ponzi schemes to his credit, and his most recent before IDLife was an energy company.

My reason for mentioning this is that it seems as if "exogenous ketones" has skipped even the "infomercial miracle" route and gone straight to the MLMs.   This does not engender faith that the product is solid, because MLMs are not about selling product.


Ketones are A fuel that can be "burned" by cells to provide the energy needed for running the works in various cells.   In a starving person, ketones are virtually essential to substitute for some of the glucose needs of glucose dependent cells such as those in the brain thus:
When it comes to fuel for the human body, we're talking about molecules available to be broken down for energy.  For the most part consideration of dietary carbohydrate, fatty acids, amino acids and ethanol is sufficient to address.  I would call these primary fuels -- in that they are in this form when absorbed by the body.  To this we could add things like organic acids (lactate, butyrate, etc.) generated in the gut, as even though we didn't necessarily consume those, they are the molecules absorbed by the human body (technically the digestive tract is "outside" of our organism). 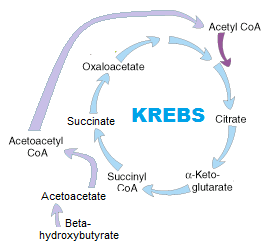 Ketones -- mostly we're talking acetoacetate and β-hydroxybutyrate -- would be a secondary fuel source.  We don't ingest them, we create them from primary fuel sources, largely long chain fatty acids.  Up until very recently the closest thing to ingesting ketones would be the MCT oil made of the 8C and 10C saturated fatty acids.  These are absorbed without requiring a chylomicron transport and metabolized directly in the liver.  Thus regardless of nutritional state, it's a fair bet that ketones are created in the process.

But if carbs are like kindling, and fat is like a large piece of hardwood, pre-formed ketones are like lighter fluid.  But it's worse than that.

For those with legit neurological issues for which keto has been demonstrated to be effective, pre-formed ketones may be helpful.  I know there's a lot of research into this option.  For me -- attn:  opinion alert! -- until more is understood, I'd prefer to do something of a more moderate keto diet, with appropriate supplements, augmented with ketogenic MCTs rather than go for the straight "hard stuff".

My reasoning is as follows, and I've stated something similar previously.  By all indications, ketone levels are regulated by the body at the production end, and generally to substitute glucose.   In the case of MCTs, it seems reasonable that production of ketones is still going to be within physiological limits and as production is involved, you're still "tied into" regulatory loops so as not to inundate cells with fuel.  Regulation at the uptake/use level is not required under physiological conditions, which usually entails starvation = low/no caloric intake.  Glucose + ketone production is regulated in synergy to meet needs.   What happens when you add ketones to the mix in bolus concentrated form?

If anyone has studies in those NOT on a keto diet that look into substrate utilization with exogenous ketones, I'd greatly appreciate links to anything that looks remotely relevant.   We have one fairly well documented n=1 in the form of Peter Attia's experiment of last year.   Attia basically did 20 min bouts of cycling at around 60% of VO2,max while having various metabolic parameters measured.  Once in "mild ketosis" and once in "mild ketosis" an hour after consuming about 15 grams of a BHB salt (what is the actual amount of BHB I don't know).  So here are some interesting things:

OK so we have our first commercial product of its sort for these exogenous ketones, so of course, this is an MLM (aka pyramid scam scheme) deal!!!   I am thinking that for therapeutic use, some form of supplement grade ketones will be available to those with epilepsy or brain GLUT transporter mutations.  This pretty much leaves performance athletes or ... weight loss gimmick.  This, in and of itself, makes me very wary of the product.

Doesn't mean you have to do the whole MLM thing though ...

Weight loss?  Unless you are eating less of other things ... well ... you know the drill.  Do exogenous ketones suppress appetite?  I have no idea.   The data on natural ketosis and appetite suppression are variable at a minimum.  Sustained energy?  One can almost think of exo-ketones as partially pre-metabolized glucose or fat.  So if glucose energy is "fleeting", this is not going to be sustained longer.   This product contains fiber and MCT so maybe that is involved in some of these promises, but your average Jimmy Joe Bob isn't likely to see any of the above other than perhaps the coke-like buzz from this stuff.

More questionable claims.  Just a short list, not addressing all:
For the above two, I don't have data (studies please!) but it seems more likely than not that this occurs *if anything*.  In other words, add the quickest energy around, and the body will burn less of the rest *if anything*.
Some of the remaining items on this list are associated with ketogenic diets in general (e.g. triglyceride and BP reduction), ketosis in starvation (e.g. nitrogen retention), or therapeutic keto diets (e.g. neuroprotection).

Exogenous ketones are a gimmick for like 99%\.  They MAY be helpful for elite athletes in competitive events (though the gagtasticness may outweigh any benefits for most) as a quick/efficient energy source.  The ever vigilant Tour de France is apparently looking into this.  I'd say time will tell there, and it may be worth keeping an eye out for actual buzz amongst the elite ranks.   They certainly could have a place in therapeutic situations, particularly for brain GLUT transporter mutations.  I'm not even sure if they've isolated the ketones per se as being the "cure" in epilepsy.

For anyone else, they make about as much sense as chugging maple syrup or coconut oil as a *supplement*.   They are "calories".  And ... well ... you know the drill.

But, since they are "unregulated" metabolically at the usage point, there's the possibility that they can overwhelm and perhaps even harm mitochondria, especially if you don't engage in activity after consumption and their claims are true (e.g. glucose and fats are still delivered to the cells unabated).    The question remains why anyone would bother to chance it?
Human Metabolism Keto Clarity Ketogenic Diet Ketones Lipolysis