Therapeutic Safety: Context is Everything

I'm working on some posts on "the list" from a recent one, and find myself in need of a few backgrounders for the upcoming Ketones are NOT the End of Cancer. Tim Ferriss & Dominic D'Agostino Should Be More Responsible (link goes live when it's published) post.  Recently I tweeted out the following:

My tweets are auto-posted to Facebook (including to my mostly-private page) where a friend responded to the statement that "a ketogenic diet is [...] safe". The comment basically challenged how we know this, or even if we know this to be true, My response is essentially the impetus for this post, but it was, in a nutshell: 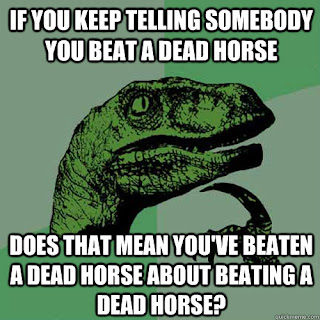 The concept of contextual accuracy and/or applicability is a proverbial dead horse that seemingly cannot be beaten enough!

There was a time when an author writing for a peer-review journal could presume a certain level of scientific literacy amongst their audience.   There was no need to define certain terms, it was understood that these were familiar to fellow professionals in the field, and these professionals would interpret terms in proper contest.    There has been considerable creep in this regard in the past decade or so, and I'm not referring solely to the rise of the PubMed abstract warrior.  Many journals have increasingly invited content from those outside their professional field, and in partnerships with media outlets such as the NYT and Time, have sought attention to their journals from more in other fields and even the lay public.  I'm not sure that is a completely bad thing, but I do believe more authors utilize any "misinterpretations" such a broader audience might make to their advantage, rather than clearly stating what their research supports.  They seem more than content when the layperson telephone-game morphs scientific terminology into "facts" that support their advocacy.

So first, a quick look at the study my tweeted quote came from:  ERGO: A pilot study of ketogenic diet in recurrent glioblastoma (full text) , and here is the record at clinicaltrials.gov, Study NCT00575146.*    Unlike many studies, the authors here were very conservative and responsible even in the wording of their abstract.

... Therefore, the ERGO trial (NCT00575146) examined feasibility of a ketogenic diet in 20 patients with recurrent glioblastoma....

We're told not once, but twice, that this was, first and foremost, a feasibility study.  Can we even use the keto diet with glioblastoma patients?  In other words, can they even tolerate the diet?   Thus in my tweeted quote (from towards end of abstract) ...

... In conclusion, a ketogenic diet is feasible and safe but probably has no significant clinical activity when used as single agent in recurrent glioma. ...

... there should be little doubt that they are making the statements about feasibility and safety in the context of treating recurrent glioma.  Unfortunately, there will be those who will add this quote to some accumulating list touting the general safety of such diets for the general population as lifestyle choices, and the effectiveness of such diets for treating cancer.  For this we cannot hold the authors responsible (a topic to be expanded upon in a future post).  We can, and should, however, hold those who try such shenanigans accountable!

Some Considerations for Therapeutic Safety

Safety and toxicity are two terms that often go hand in hand.  If something is toxic, it is generally not safe and vice versa.  But as the adage goes, the dose makes the poison, and when you already have some illness or other health condition, one could say that you are already "in an unsafe place".  Generally speaking, we try to avoid toxic things.  For example chlorine gas is toxic, so we avoid cleaning with ammonia and bleach together so as not to expose ourselves to it.  There's no reason to ever deliberately do so, so you don't.  While there may be fairly extensive toxicity data available, it is not intended for you to go about calculating how long to spend cleaning your bathroom with the aforementioned ammonia-bleach mixture before you will experience permanent detrimental consequences.

When it comes to the safety of a treatment, however, we are talking about deliberate and measured exposure to some potentially toxic substance, even if only negligibly so.  We are also not starting from a healthy state -- whether it's mild symptoms one can simply learn to live with, or a terminal illness anywhere in between.   The ultimate safety of a treatment must be balanced against the severity of the condition.  In other words, for therapeutic treatments, safety can be a contextually qualified term.


Treatment Decisions are then Based On:


A Designation of Therapeutic Safety:

The "Balancing Act" of
Considerations for Generally Treatable Conditions

Let's use a skin rash as an example, say, poison ivy, and referring to the above diagram:

Upper Left:  If you present with a mild poison ivy outbreak, you may be sent away and told to purchase and OTC product to relieve the itching and irritation, and wait for it to go away on its own.  Such a product is going to have few if any real safety issues and in most cases this strikes the proper balance for the situation and the rash resolves.

Upper Right:  If you have contracted a more severe case of poison ivy, there may be concerns of it spreading to your eyes, respiratory tract, etc.  In such cases, the doctor may prescribe a course of prednisone -- the dose and duration of which is to be determined by the severity of the condition.   Prednisone is not without some known side effects, though these are usually well within the context of "safe".

Lower Left:  Returning to a mild case of poison ivy, it would likely not be prudent for the doctor to prescribe prednisone.  This treatment may itself cause skin redness and hives, and side effects include raising blood pressure, headaches and stomach ulcers to name a few.  While these are probably rare, why risk them when the condition doesn't warrant it?

Lower Right:  If you don't have poison ivy, would you apply calamine lotion and pop diphenhydramine (Benadryl) before going on a camping trip to either prevent a poison ivy breakout, and or treat your "pre-poison ivy" before symptoms are even noticeable?

There are obviously other combinations not depicted in the above crude graphic, but I want to stress one more general possibility.  Here the treatments act in concert with the condition and essentially overwhelm the person such that overall health declines.

Since this is a backgrounder post for a keto-ends-cancer post, this is an especially relevant piece of the therapeutic puzzle.    In one keto-diet-for-cancer study I blogged on previously, out of 10 subjects, 9 experienced weight loss of between 3.1 and 6.2% of body weight (1 gained 2.4%).  All consumed in deficit of predicted energy requirements -- from just under 200 to just under 1200 calorie deficits -- and absolute daily calorie intakes were as follows:  724, 784, 898, 1034, 1115, 1137, 1144, 1282, 1844 and 2397.     According to Wikipedia, about half of all cancer patients experience cachexia (wasting) which is certainly not helped by a low protein, hypocaloric diet that suppresses appetite.

In addition to increasing morbidity and mortality, aggravating the side effects of chemotherapy, and reducing quality of life, cachexia is considered the immediate cause of death of a large proportion of cancer patients, ranging from 22% to 40% of the patients.

This is not to mention other unknowns such as effect on the immune system, or longer term safety of continuing the diet if-and-once it is indeed effective against the cancer.

Sticking with ketogenic diets to treat cancer, the take-home message there is that the therapeutic safety of KD in that context does not automatically translate to the safety of KDs in other therapeutic contexts.  Conversely, the safety of such diets for children with epilepsy doesn't necessarily make them safe for cancer patients.  In a Phase I study such as ECHO, the words "a ketogenic diet ... is safe" is made based on the responses of 20 patients.  There should be (and to some extent have been and/or will be) further studies, although I am unsure that a dietary regime will require formal Phase II and III to be implemented by mainstream medicine.

To be on the safe side, it is probably best to always look for context when encountering the term safe.  At both ends of the spectrum especially, it tends to have different meaning:

So the bottom line regarding safety is that it is a term that is very sensitive to the context in which it is used.  It should therefore be used with caution.  Further, authors of non-scientific works should not rely on its usage in the therapeutic context to further an agenda.  We see this done most frequently in the nutrition field with both diets and supplementation, and it's rather ironic that the most guilty in this regard tend to accuse doctors of doing the same thing with pharmaceuticals.


* Recently I have been using clinicaltrials.gov to search for human clinical trials for various treatments, etc.  This is helpful in gauging the actual interest in a topic and the totality of the clinical data currently available and/or to be available within a reasonable timeframe.  The summary views are also helpful to quickly assess general study design and outcomes measured.  Lastly, even though the linking to all papers published lags somewhat, you can search on the trial number in Google scholar to find anything that is out there!

Blogger said…
Using EasyHits4U you can earn free advertising credits by surfing other website-ads from a account base of over 1.2 million accounts. Earn credits fast with a 1:1 exchange ratio.
September 7, 2017 at 7:45 AM