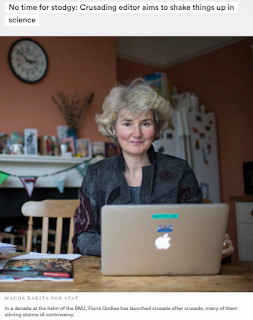 It seems crusading editor Fiona Godlee's BMJ is out front again with another sensationalism-over-science "study": Re-evaluation of the traditional diet-heart hypothesis: analysis of recovered data from Minnesota Coronary Experiment (1968-73). This is spawning the predictable press coverage, such as  This study 40 years ago could have reshaped the American diet. But it was never fully published.

Firstly, the idea that any single RCT would change history -- given that the likes of Nina Teicholz, Zoe Harcombe and others have drilled into us the fact that RCTs in this area were scarce (and will remain so) -- truly does border on the pathological at this point.    An appropriate RCT, of adequate size and duration, conducted with suitable compliance and verification, could conceivably turn any number of hypotheses on their heads.   But such a trial would be next-to-impossible.  Besides, even if this RCT-to-end-all-RCTs-&-nutritional-unknowns were to begin tomorrow, there would be no more-certain answers than we have today for at least a decade, better yet two or three.  And that right there is the monumental frustration.  EVERYBODY KNOWS THIS.  The current revisionist revisitation of studies from almost a half century ago does nothing for anyone.


Besides .... As Nina "no competing interests" Teicholz points out in her response at the BMJ site, Gary Taubes himself had talked about this study almost 10 years ago now in Good Calories, Bad Calories.

The Minnesota Coronary Survey was, by far, the largest diet-heart trial carried out in the United States, yet it played no role in the evolution of the dietary-fat hypothesis. Indeed, the results of the study went unpublished for sixteen years, by which time the controversy had been publicly settled. The principal investigator on the trial was Ivan Frantz, Jr., who worked in Keys’s department at the University of Minnesota. Frantz retired in 1988 and published the results a year later in a journal called Arteriosclerosis, which is unlikely to be read by anyone outside the field of cardiology.* 10

*10 The results were also presented at a conference of the American Heart Association in 1975. A small chart documenting the results, without explanation, was then published as an abstract in the journal Circulation, along with the other abstracts from the conference.

Aside:  Don't you just love Gary's referencing and footnoting ways?  Also, how far we have fallen, that it is somehow a negative to publish in a legitimate peer-reviewed academic journal, read by people knowledgeable and working in the field ... Seriously?!!   As the footnote states, the results were presented contemporaneously at an AHA conference, and published in an abstract in another academic publication.   Now abstracts may seem useless in today's instant online world, but when I was in school, you still began literature searches in the ABSTRACTS volumes for the journals.   I'm not going to pretend that these replace full length articles, but to imply that Frantz was somehow evading scrutiny by publishing in some obscure journal in the field is a bit much. Taubes continues:

The Minnesota trial began in November 1968 and included more than nine thousand men and women in six state mental hospitals and one nursing home. Half of the patients were served a typical American diet, and half a cholesterol-lowering diet that included egg substitutes, soft margarine, low-fat beef, and extra vegetables; it was low in saturated fat and dietary cholesterol and high in polyunsaturated fat. Because the patients were not confined to the various mental hospitals for the entire four and a half years of the study, the average subject ate the diet for only a little more than a year.  Average cholesterol levels dropped by 15 percent.  Men on the diet had a slightly lower rate of heart attacks, but the women had more. Overall, the cholesterol-lowering diet was associated with an increased rate of heart disease. Of the patients eating the diet, 269 died during the trial, compared with only 206 of those eating the normal hospital fare.

More on this part in a minute, but Teicholz makes sure to mention this part:


When I asked Frantz in late 2003 why the study went unpublished for sixteen years, he said, “We were just disappointed in the way it came out.”

You will have to pardon me if I question just how damning this quote is.   They

could have been disappointed in the fact that despite the size of the study, so few were institutionalized long enough to even follow the diets for over a year.    Frankly, we only have Taubes' word for it that Frantz even said this at all, some 15 years after retirement and 6 years before his death.    It's not like Taubes is known for diligence when it comes to comprehensive coverage and contextual citations.  [/snarkasm]    Actually, I'll just come out and say this point blank:  Gary Taubes deliberately twists interpretations, takes statements out of context, and misrepresents the scientific evidence in such routine fashion that he is not to be believed without supporting evidence.   Don't believe me?  Begin here:  GCBC Reference Check ~ Part III of ? ~ Is glycerol phosphate rate-limiting?, then work through the full series linked here, and those are just the posts on specific book citations, click on the label for more!

Let me cut to the chase, then we'll circle back around to a few highlights.  Behold Table 4 from the 1988 paper summing up heart related incidents.

More than half of these events occurred within the first year of the study.   Note: The (N) of the top two rows add to the totals in the last row, thus the ≥ 1 year data includes ≥ 2 yrs, and so on.   Whatever you think may be a proper or healthy diet, I hope everyone can agree that any "normal" diet's impact on health is over years and decades.  (I hesitate to use the word normal, but work with me here!)  In the end, this intervention involved a change in less than 10% of total caloric intake and switching that from saturated to polyunsaturated fats.    The length of time -- or lack thereof! -- is reason enough to explain the resulting lack of effect either way.   But if you really wanted to "go there", perhaps the intervention was not significant enough for any length of time, or perhaps fiddling with fat type is futile at those high levels overall?  Continuing ... 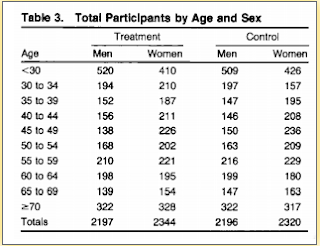 Let's add Table 3 to the mix.   This is not a middle-aged group of individuals.  Around 20% were under 30, over one-third were under 40, and more than half were under 50.  Let's put this together with the fact that more than half of the heart-related incidents occurred within a year of hospitalization/intervention, and is it any wonder the results were so inconsequential to the intervention (and likely due to pre-existing circumstances)?

Here is the objective of the current article:

To examine the traditional diet-heart hypothesis through recovery and analysis of previously unpublished data from the Minnesota Coronary Experiment (MCE) and to put findings in the context of existing diet-heart randomized controlled trials through a systematic review and meta-analysis.

Their article also includes a link (and considered) a 1981 Master's Thesis analyzing the study data.  Here's the bottom line here.

Unless this "long lost data" involves the results of previously unknown hundreds of subjects participating in the trial for several more years than previously disclosed, there is no amount of data collected that has provides anything meaningful to the scientific dialog.

It most certainly does not warrant any sort of  "re-evaluation of the traditional diet-heart hypothesis" as the sensationalistic BMJ title implies.   I don't care if they uncovered the diaries of all 9000+ subjects and discovered that an inordinate number of them began hearing voices in the over 50 but under 55 age group of high PUFA group, but only those in the over 70 group of the controls heard Ancel Keys' spirit hounding them.  WHO CARES?!  They weren't ON the diets long enough to test anything.  Perhaps this is what Frantz was disappointed in.  Perhaps they had hoped for a somewhat older, less otherwise healthy population that could be intervened with and followed for several years.  I don't know.  Frantz's motivations are not really my concern because I think the trial, and its lack of impact speak for themselves.

EDIT IN:  This is pretty much in agreement with this response on the BMJ website. 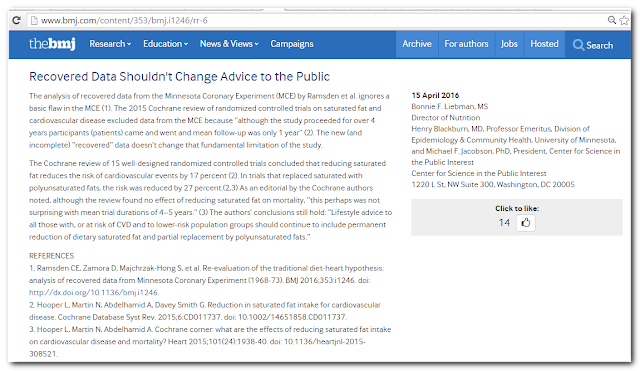 So what is my concern, is the direction of nutritional research, academic journals, and the peer review process if this sort of disingenuous dredging up of dubious diet trials is the sort of thing passing for headline worthy science these days.  WE CAN DO BETTER FOLKS.    Why is anyone wasting time rehashing the studies that turned out to be insufficient in one way or another in the past?   Why isn't ANYONE in the media questioning this instead of confusing people more by publicizing such absurd exercises in futility?

Lastly ... what does the current study have to do with alcoholism?

How about the rest of the funding?


and the University of North Carolina Program on Integrative Medicine (National Institutes of Health grant T-32 AT003378 [link]) ...

Seems that there's more to be curious about in the whys of the current study than anything else.
CVD Diet Comparisons Dietary Guidelines Gary Taubes Fact Check Nina Teicholz Big Fat Surprise Fact Check