Is Gary Taubes Losing It?

Is Gary Taubes losing it?  His grip on reality, that is?  I submit that it is the only "innocent" explanation for his behavior of late.

I'll have more to say when I can recoup from the busy time of year in my real job coupled with traveling weekend before last.  But if you haven't heard, two studies conducted by NIH scientist Kevin Hall:
The predictable response to the first study has been, disturbingly, worse than usual.  The worst of it coming from Mike Eades.   Scratch that, I think it is even worse that Taubes himself offered up no original comment on his own blog, but yet allowed Eades' screed to speak for him.  You see, Kevin Hall is, according to Eades, hampered by youthful inexperience in the scientific world and likely a corrupt scientist riddled with cognitive dissonance.  This coming from a guy who listens to Feinman explain that entropy is how energy disappears when boulders drop off cliffs, and other manglings of the laws of physics.   SIGH.

If your life's work hypothesis were going down the tubes, would you not hit the airwaves to explain your side of things?  Apparently not.  I was about to file a missing person report when I saw Gary had tweeted out Eades' article.  But wait!  There's more!!  Gary Taubes *HAS* decided to weigh in on the new Biggest Loser study with (yet another) editorial:

Why Do We Get Fat?

It's the same old same old.  Go read if you must.  Not a peep about the completed NuSI study, only mentions David Ludwig's upcoming NuSI study.   But Ludwig's "pilot" (Ebbeling et.al. 2012) already showed three things:
But I'm getting that deja vu all over again feeling again or is that deja vu-squared?

He's challenging researchers to bets on what the outcome of Ludwig's trial will be, and how much crow I guess they should eat when the low carb arm prevails?   What shall I put up if anyone can guess which rigorous experiment he was talking about in the subtitle there?  Definitive answers?  Ahem ...  A rather lengthy excerpt:


In the past 20 years significant evidence has accumulated to suggest that these diet doctors may have been right, that the hormone hypothesis is a viable explanation for why we get fat and that insulin resistance, driven perhaps by the sugars in the diet, is a fundamental defect not just in type 2 diabetes but in heart disease and even cancer. This makes rigorous testing of the roles of carbohydrates and insulin critically important. Because the ultimate goal is to identify the environmental triggers of obesity, experiments should, ideally, be directed at elucidating the processes that lead to the accumulation of excess fat. But obesity can take decades to develop, so any month-to-month fat gains may be too small to detect. Thus, the first step that NuSI-funded researchers will take is to test the competing hypotheses on weight loss, which can happen relatively quickly. These first results will then help determine what future experiments are needed to further clarify the mechanisms at work and which of these hypotheses is correct.

A key initial experiment will be carried out jointly by researchers at Columbia University, the National Institutes of Health, the Florida Hospital–Sanford-Burnham Translational Research Institute in Orlando, and the Pennington Biomedical Research Center in Baton Rouge, La. In this pilot study, 16 overweight and obese participants will be housed throughout the experiment in research facilities to ensure accurate assessments of calorie consumption and energy expenditure. In stage one, the participants will be fed a diet similar to that of the average American—50 percent carbohydrates (15 percent sugar), 35 percent fat and 15 percent protein. Researchers will carefully manipulate the calories consumed until it is clear the participants are neither gaining nor losing fat. In other words, the calories they take in will match the calories they expend, as measured in a device called a metabolic chamber. For stage two, the subjects will be fed a diet of precisely the same number of calories they had been consuming—distributed over the same number of meals and snacks—but the composition will change dramatically.

The total carbohydrate content of the new diet will be exceedingly low—on the order of 5 percent, which translates to only the carbohydrates that occur naturally in meat, fish, fowl, eggs, cheese, animal fat and vegetable oil, along with servings of green leafy vegetables. The protein content of this diet will match that of the diet the subjects ate initially—15 percent of calories. The remainder—80 percent of calories—will consist of fat from these real food sources. The idea is not to test whether this diet is healthy or sustainable for a lifetime but to use it to lower insulin levels by the greatest amount in the shortest time.

Meaningful scientific experiments ideally set up a situation in which competing hypotheses make different predictions about what will happen.   In this case, if fat accumulation is primarily driven by an energy imbalance, these subjects should neither lose nor gain weight because they will be eating precisely as many calories as they are expending.   Such a result would support the conventional wisdom—that a calorie is a calorie whether it comes from fat, carbohydrate or protein.  If, on the other hand, the macronutrient composition affects fat accumulation, then these subjects should lose both weight and fat on the carbohydrate-restricted regime and their energy expenditure should increase, supporting the idea that a calorie of carbohydrate is more fattening than one from protein or fat, presumably because of the effect on insulin.


OK.  So I still hold off until the NuSI/Hall study  is published for any further analysis.  Still, the writing on the wall from the abstract is clear: 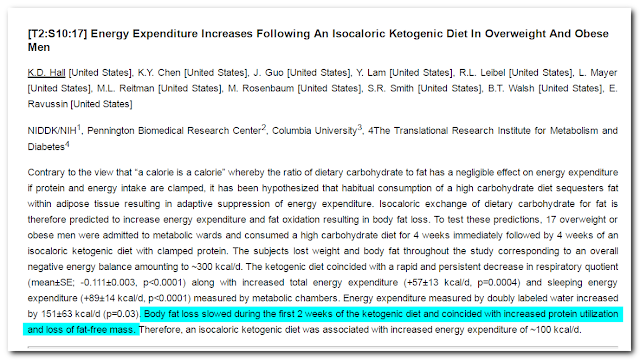 Yes, energy expenditure temporarily went up (see poster) but this was accompanied by a slowing of loss in body fat, increased protein utilization (metabolism/oxidation) and lean mass loss.  This is NOT what TWICHOO predicts ... which is why Gary is so uncharacteristically silent when these monumental results were unveiled.  Instead he resorted to second hand character assassination of the scientist his own organization funded.  Nice.  Classy as always Gary.