I just came back from a trip to Kansas City to meet the public (grin) and was immediately bombarded from several sides with the above video.   Nutrition Wonk has transcribed the talk so head on over to see that and the poster!

This was a bit coincidental, as this very study had just come up in conversation over the weekend, with the only man Gary Taubes has ever "debated".  Alan Aragon.    I use the quotation marks because by most accounts Taubes phoned it in with some version of the same old, same old he's been giving for 8 years at the time.  But what frustrates me is that this study was completed some time towards the end of summer 2014 (clinicaltrials.gov gives it officially Feb 2015).  Time to publication these days is often quite long for a variety of reasons, but I recall Gary talking about this study at the Seth Roberts Memorial Talks held after the Ancestral Health Symposium in August of 2014.  Why then, were the paying attendees of the EPIC Fitness Summit in May of 2015 treated to warmed over nonsense that had been falsified by his own NuSI funded "good science"?


What became of those fall meetings?  NuSI is already acting oddly here as a funding body.  I'll leave that alone for now, except to point out that funding sources are always scrutinized on the basis of potential influence over researchers in how they interpret data, etc.  The full discussion goes on (I don't have an exact time stamp, it's at least two-thirds of the way into the video) to mention that a larger study is hoped for and The LJAF (Arnold) has promised to pay half if the other half can be raised elsewhere.  Now perhaps he was talking about that NAFLD study, but I don't think so.

So here he is in the Fat Summit that ran in the end of January this year.  He's chatting with Mark Hyman who is one relying heavily on Taubes' "alternate hypothesis" to make money selling his latest book, supplements and whatever else he's can do to get you to hand over your hard earned dollars.   In two places, Taubes mentions Kevin Hall:

Apologies for the edit job.  (I have the full presentation if anyone is interested in "borrowing" it, carbsane, gmail, you know the drill!)  The first study he was referring to is:  Calorie for Calorie, Dietary Fat Restriction Results in More Body Fat Loss than Carbohydrate Restriction in People with Obesity in Cell Metabolism, 2015.   Here's the Graphical Abstract and Highlights in the video. 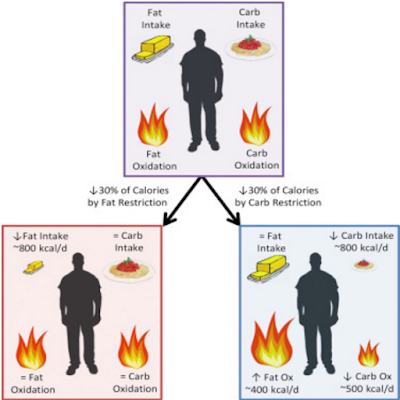 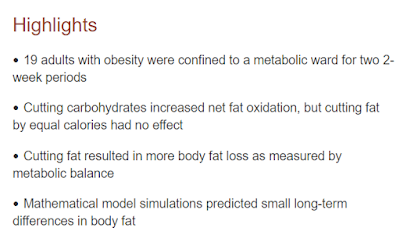 Yes, it's short term and very low fat (7%) but that was so as to equalize the calorie deficit by cutting out 800 calories of just the isolated nutrient -- just-fat or just-carbs -- while keeping absolute intake of protein and the other macro constant.  How is that 2015 study NOT testing some part of Taubes' hypothesis?  Furthermore:

How is a 7% fat diet that radical a departure (when innumerable humans consume only around 10% in maintenance) from the norm, but a 5% carb & 80% fat diet is somehow more relevant (when nobody eats such a diet ... Inuit diet very high protein, not over 60% fat)??????


I'll hold off discussing any more study specifics until the paper is published, but everyone seems to be hanging their hats on the possibility that appetite/hunger could still be key to LC weight loss success.   This study doesn't address that aspect.   Short term appetite suppression -- by fairly deep ketosis -- is not applicable to a population that began eating a "balanced" diet, and never even embraced a "low fat" diet according to any database.  Thus studies on diets such as employed in the NuSI study are truly irrelevant to the "obesity epidemic" of the past 40 or so years.

It's beyond frustrating at this point, it's infuriating.  Taubes' dishonesty is unparalleled in its audacity.  Truly.  The MDs -- Ludwig, Hyman, Lustig to name just three -- cashing in on TWICHOO are simply shameless at this point as well.

One wonders if this is not part of the reason why NuSI visionary, co-founder, fundraiser extraordinaire, President, and bona fide Taubes fan (former?), Peter Attia MD, is no longer at the helm at NuSI.

In a very quiet way, he has been replaced, and contrary to the big-deal-in-philanthropy announcements of NuSI founding, there's not even an announcement on the website.  Oh wait!!!  I go to get links and such to the ironic choice of replacement, and as it turns out, Christopher Ochner has already moved on without replacement. 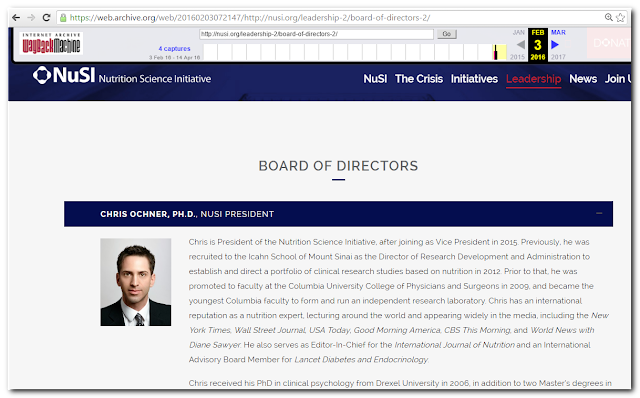 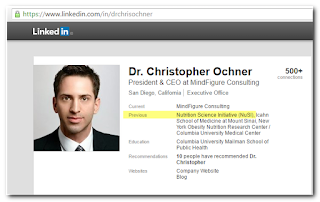 Still, it is too ironic not to mention that for a brief time, NuSI had a CICO man at the helm!

Given the other news of the day and surrounding buzz involving Kevin Hall and that Biggest Loser study (yes, next up ... I hope!) one can only hope that NuSI changes course and looks into answering some of the as-yet unanswered questions on what long term adaptations formerly-obese may/might face so as to better equip people who have lost weight (or want to lose some).  It beats silly diet wars ...


Instead Gary Taubes risks becoming what he feared in his first IHC interview after Good Calories, Bad Calories came out, with Seth Roberts.

... what radicalized me is that they don't care. If they successfully ward off my threat to their beliefs, then I'm in a very dangerous place. Then it's, like I said, where I end up a bitter demented old man, one of those guys who's muttering to himself all the time that they, the establishment, didn't listen to him…