A quick post here just to get it out there, and I'm already a couple weeks behind the curve.  Oddly haven't heard too much about this, or perhaps it's because I've lost the will to deal with the community that would jump on this?  Who knows :-)


There is a new NIH funded study out of Columbia (Rosenbaum & Leibel) published this month:  Models of Energy Homeostasis in Response to Maintenance of Reduced Body Weight

I'm going to limit this post to just one of the three experiments conducted:

In 17 subjects (14 women, 3 men) weight stable energy expenditure and body composition  was determined following a period of 6-8 weeks of weight stability.  They were then put on an 800 cal/day diet until they had reduced their weight by 10% of initial weight.  This took 7-13 weeks, after which their food intake was increased to achieve weight stability at the 10% reduced weight for 6-8 weeks.  Energy expenditure and body composition were measured here.  This was repeated to achieve 20% loss, where the second weight loss phase took 8-14 weeks.

Here are the results: 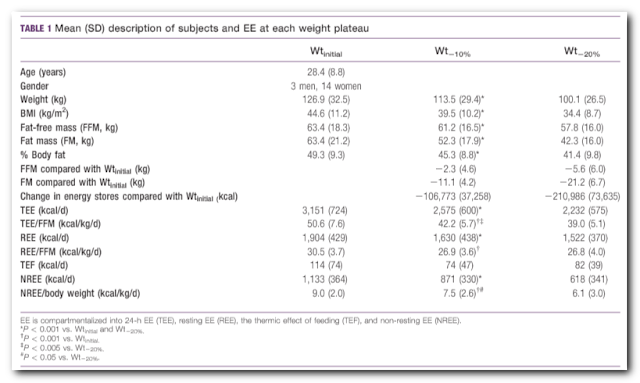 In the circles I travel on social media, the issue of Obesity journal this study was published in also contained that "Biggest Loser regain" study and a depressingly fatalistic editorial by the editors.   I'm trying to get back into the blogging swing here and this is a topic I plan to address.

The metabolic adaptation here is significant, but what is unclear to me is whether it is truly sustained.  Is 6-8 weeks long enough to respond to 7-13 weeks of a rather austere 800 cal/day reduction diet?  These were considerably obese people beginning at BMI almost 45 and averaging around 280 lbs.  Going by their initial average TEE of over 3000 cal/day, that was over 2000 cal/day deficit.   (I'm rather annoyed that we have 3 males mixed in with 14 females for this study -- either mix genders with roughly equal amounts of each, or do a single gender.  Given the differences between genders in terms of the relationship of weight/composition to energy expenditure, this is inexcusable.)
The first 10% of weight loss (13.4 kg, roughly 30 lbs) resulted in an absolute drop in REE of 274 calories, and TEE of 576 calories.  The second 10% of weight loss (additional 13.4 kg/30 lbs) were REE of 108 calories, TEE of 343 calories -- not quite, but roughly half of the absolute reductions for the first 10%.   These subjects began at 50% fat their weight loss was predominantly fat.  The first 30 lbs were just over 80% fat while the second 30 lbs was roughly 75% fat.   So we see that the energy expenditures viewed as a percentage of lean mass look rather the more daunting.

However ... there appears to be a "slow down" in the adaptation with the second 10% of weight loss.  The REE:TEE of 1522:2232 for the ~220 lb/BMI 34.4  mostly women is a bit low for young women, but not all that off vs. baseline for the women in this study, particularly the REE.  So it would be nice to see the values 6 months to a year of more out of maintaining the reduced weight.  The other thing that would be interesting is to do this all the way down to a normal weight.   I have read/analyzed a whole lot more than I've blogged on as of yet on this topic.  Hopefully I can get caught up on that after vacation.   But increasingly I'm coming to believe that the totality of the data actually points more towards adaptation, to the extent that it may exist past the reduced energy requirements at a reduced weight, is not a strong factor in this weight loss puzzle.  Certainly not as strong as some analyses are leading us to believe.

On EasyHits4U you can earn free advertising credits by visiting other website-ads from a account base of over 1.2 million accounts. Earn credits fast with a 1:1 exchange ratio.