- September 23, 2016
This was initially going to be a monster post, but I'm still struggling to organize it all!  The things uncovered at every turn last week and continuing through this one are astounding, and the hypocrisy of those touting this as some "smoking gun" of great importance is seemingly boundless.  This was all still swirling in my head when I went on Angelo Coppola's Latest in Paleo podcast ... in retrospect not a good idea when I'm wound up!

I decided to break this in two to publish something up.  This installment will be linking to background to get something that blogging rock rolling on this.  Unless you've been living under a rock, this happened in the JAMA Internal Medicine:

The crux of the matter is that a half century ago the Sugar Research Foundation paid three scientists a combined sum of ~$50K (2016 USD) to write a review article in the NEJM.   This fact was not disclosed at the time.   We are led to believe that this is why, all these decades later, the US Government recommends we get at least half our calories from sugar.  What?  No?  Not true?  You'd think that were the case to listen to those who went bonkers over this!   At this point I have an almost visceral reaction whenever anyone starts in on that whole "everything we were told was wrong because Ancel Keys" thing because it's just too much.  As corrupt as anyone thinks science, industry, academics/peer review, the media, and government could possibly be, this scenario just doesn't hold water.

I highlighted that which I did in the article info graphic above for a reason.  Almost immediately in the introduction, I sensed an agenda afoot:

I'm going to give you one guess as to what references 2 and 3 are there and I'm going to guess my readers have a high success rate here!  (answer on bottom of post).  I didn't notice anyone familiar amongst the authors however, and didn't have time to poke around.  Ahh the rocks beds of the IHC ...

A couple of links and a Hat tip:

Kevin Klatt at Nutrevolve wrote an excellent article in response to the article and the ensuing flurry of "gotchas": JAMA Internal Medicine - Sugar Industry.   He covers a lot of ground and links to previous posts on the topic.  I implore you to read it! Bravo Kevin!!   I'll try not to rehash too much of his work.  If I may be so bold as to condense out one key take-away, it is that this is much ado about nothing.  Such specifics of disclosure were not required at the time, and the funding and documents do not appear to be the sort of smoking gun they are being made out to be.

Adele Hite at Eathropology writes an excellent article as well:  Sugar and Spite: Mark Hegsted and the Great Sugar Conspiracy .  I didn't think it was going to be when I saw her graphic and read the first paragraph or two, but read it all the way through.   As it turns out, in 1977 there were two versions of the Dietary Goals, and under Hegsted's watch the restriction on sugar was elevated in importance!  Does this sound like someone who was bought off?

Imagine my surprise when I went looking to find that indeed, the Laura & John Arnold Foundation is the sole funding for UCSF affiliated Sugar Science.  You won't find this disclosed in any such transparent manner (more on this in Part II). 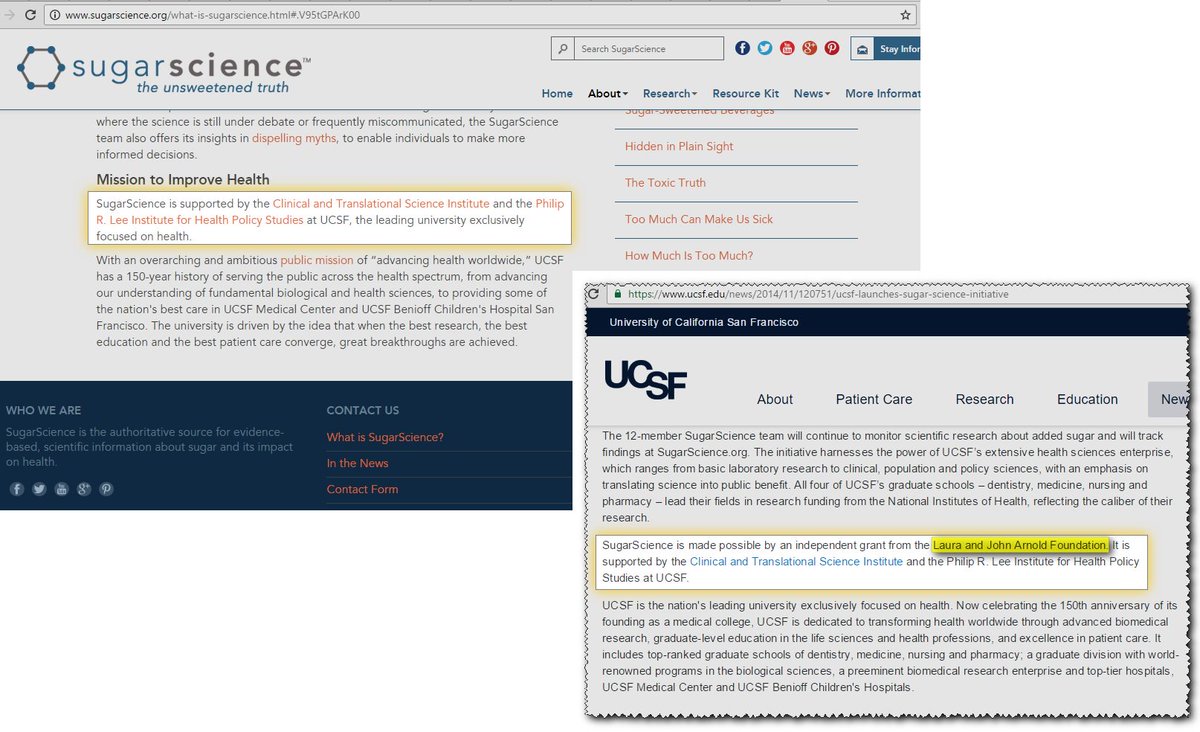 There is Cristin E. Kearns and Laura A. Schmidt ... and Robert Lustig.  No conflicts of interest to disclose you say?    I have quite a bit more on this front!

I have written a lot of content on nutrition science history and various conflicts of interest. Most of this post will focus on the rank hypocrisy of those trying to portray this as some sort of unique, nutritional time continuum bending scandal. The two posts of most relevance are linked below, and if you're newer to the blog, they will provide a lot of background.
I've written a few articles on the shroud of uncertainty regarding funding and advocacy by personalities like Nina Teicholz, Gary Taubes, Jeff Volek, Stephen Phinney, David Ludwig, Zoe Harcombe, etc. I'll hopefully come back to add more links when I have more time.  But pertaining to LJAF funding and the LACK of transparency this funding vein results in: