I am (STILL) working on a comprehensive post addressing "The Biggest Loser Regain" study and fallout.  But as I was going along the way, I'm finding some gems that really just need posts of their own.  This is one of them.  I'm also going to do my best to clean out the draft bin for the remainder of 2016!    [If you haven't seen the previous entry referencing this topic, here is a link.  If it is some time past the publish date of this current post, this link should be active for the TBLR post.] 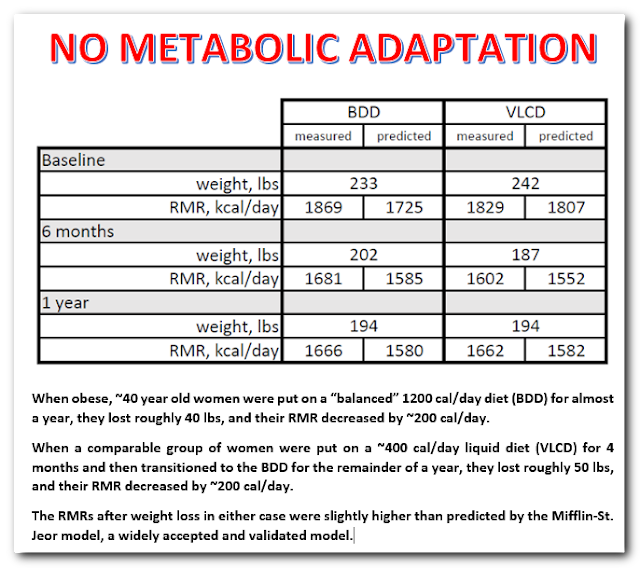 This study is over a quarter century old.  It is cited in the recent TBL study as reference #15 as follows:

The magnitude of metabolic adaptation increased 6 years after “The Biggest Loser” competition. This was surprising given the relative stability of body weight before the follow-up measurements compared with the substantial negative energy balance at the end of the competition which is known to further suppress RMR (15,16).

For completeness, here's a link to reference #16:   Do adaptive changes in metabolic rate favor weight regain in weight-reduced individuals?  (AJCN, 2000).   I'll probably address that one with more specifics in the TBLR post.  Here are the Conclusions from the abstracts of these two studies:

(1) ...   neither dietary regimen , combined with modest physical activity,  was associated with long-term reductions in resting metabolic rate that exceeded decreases anticipated with the achievement of a lower body weight .

(2) Energy restriction produces a transient hypothyroid-hypometabolic state that normalizes on return to energy balanced conditions.  Failure to establish energy balance after weight loss gives the misleading impression that weight-reduced persons are energy conservative and predisposed to weight regain.   Our findings do not provide evidence in support of adaptive metabolic changes as an explanation for the tendency of weight-reduced persons to regain weight.

TRANSLATION:  The results in TBLR were in stark contrast to those in these two studies.   There was no metabolic adaptation in these studies.

A possible reason for this was alluded to in the TBLR discussion, but not specifically stated.  (Spoiler?  The BLers were likely actively dieting very recently prior to testing.)

So back to my study.    This was a long term study -- 48 weeks = almost one year.  Surely for such a study the diets referred to as "neither dietary regimen" were your standard 500 cal/day deficit to produce roughly a-pound-a-week weight loss on a "balanced diet"?  Nope!   Let's get the general details out of the way here.  Here are the baseline characteristics of the women: 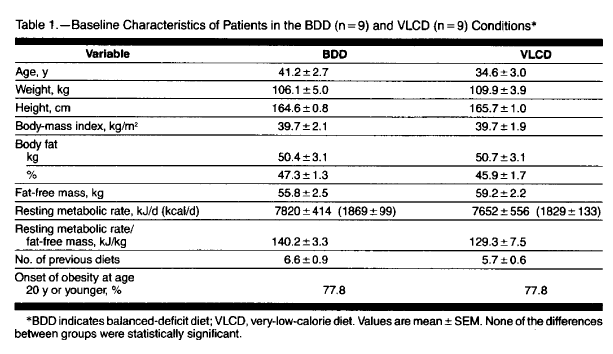 For the non-metrically inclined, these women averaged 5'5" tall and around 235 lbs ... of interest, their resting metabolic rates were around 1850 cal/day, which is roughly 100 cal/day more than predicted by Mifflin St-Jeor for this "average subject" using 38 for the age.  In other words, normal.

This was not a metabolic ward study but there was greater-than-usual monitoring for an outpatient study.  Furthermore, the magnitude of weight lost compared with many other diet trials would indicate a fairly high degree of compliance, at least for the first half.  The diets:


Here are the main results in graphical form:  (percent changes from baseline) 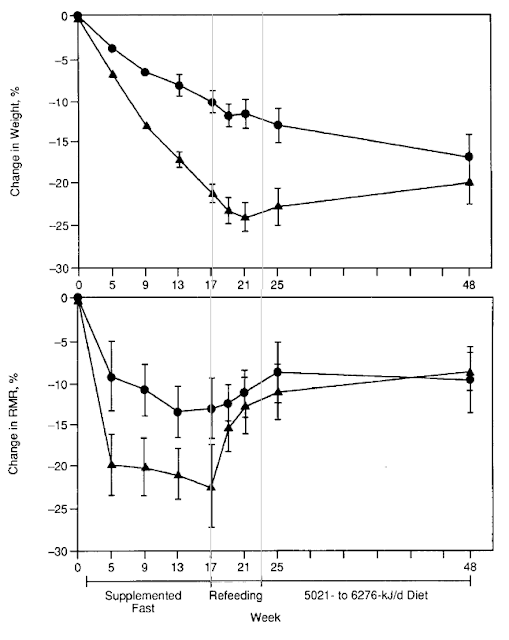 Here are the tabular results in absolute amounts: 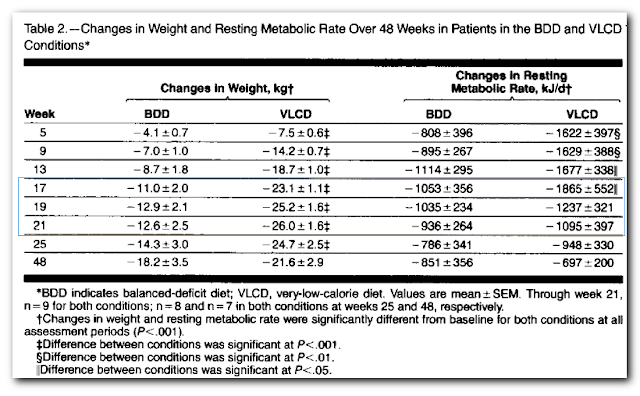 Since there was a reduction in metabolic rate, and it was quite drastic for the very low calorie group at some time points, I'm going to repeat a quote from above:

... neither dietary regimen , combined with modest physical activity, was associated with long-term reductions in resting metabolic rate that exceeded decreases anticipated with the achievement of a lower body weight .

For the VLCalD, subjects were at roughly a 1400 cal/day deficit from their RMR (not TDEE), which did result in about a 450 cal/day "adaptation" in the RMR, leaving an almost 1000 cal/day deficit remaining.  These subjects were eating 400 cal/day for four months, and this is as bad as it got!  And they still lost weight, because of course they were still in a deficit.   The next time anyone tells you that you've (ahem ... clears throat ... Fung) put yourself into "starvation mode" and your body has reacted by dialing down your metabolism to match, link them to this post, or cite this study!!!   More importantly, you see that when they increased intake to normal levels their RMRs came right back up.  (Not unlike the anorexics I've discussed previously.)


Regression on Subjects vs. Established Models

Which brings me now to the discussion of interpretation of these studies.  There are numerous metabolic rate estimation equations out there, off the top of my head the most common are Harris-Benedict, Mifflin-St.Jeor and Katch-McArdle, but let's also not forget Kevin Hall's own NIH work and his body weight simulator.  Instead of reporting individual results in the context of any of those models, the new crop of "metabolic adaptation doom" studies prefers to use a regression line on the (often few) subjects in the study.  They then slide down that line to the new weight and claim that is the "predicted RMR".

In this study, they did what should be done:  compared the metabolic rates to those that would be predicted for the subject's anthropometrics.  Here's my summary from the data of what happened (same table from top of the post).  I entered the baseline and reported data in metric units directly into a simulator based on Mifflin-St.Jeor.  Weights are converted to pounds in the table for convenience.  For 6 months I used 25 weeks, and rounded 48 weeks to 1 year for summary purposes.


In the recent studies that *seem* to demonstrate this phenomenon, there has been either/or/all:


Which begs the question as to why this is, and older studies such as this one are mentioned only in passing, or not at all.  I have some ideas as to why, and hope to expand on them soon.  But this is one of the most bothersome outcomes of the rather not-so-good Biggest Loser study, and the horrendous doom and gloom headlines and media reports it generated.

Metabolic adaptation is a valid hypothesis to explain why some obese seem to be unable to lose weight or lose enough weight.  It could go a long way to describe failure rates for maintenance.  But even in the Biggest Loser study, it was those who "adapted" the most who kept the most weight off.  We don't hear much about that because it does not fit the developing narrative.

To those who have lost a lot of weight or need to, I present this study, and I hope to add others in the coming weeks or months.  Yes, you'll have to eat less than you used to when you weighed more or what you do when you are currently obese.  Fact.  But there's more convincing evidence out there that it won't be less because you dieted down to that weight,  than exists evidence for some cruel adaptation where you'll either be hungry all the time or regain all the weight.  You'll likely be able to eat at the same levels as your "naturally thin" friends who never gained the weight.  (I'm not saying this will be easy or won't require more deliberate effort than for others.)  Regain is NOT inevitable as the narrative is pushing.