A Collection of "Accidental Experimental Evidences" Against Sugar/Fructose Addiction

This post may be added to from time to time, to collect in one place evidence against the concept of sugar/fructose addiction.   When added to it will be bumped, and the "skip to using browser search" table of contents below will be updated.

Just some definitions and clarifications of what this post will contain.

A scientific experiment is distinguished by applying some "treatment" and observing/quantifying/analyzing the effects.

This post will not include evidence from observational studies.

The results of a scientific study reported in peer review journal or scientific conference.

This post will not include any n=1 anecdotes and such, no matter how well some individual claims to document their self-experimentation.

When researchers design experiments, they generally outline a purpose for conducting them.  The researchers have a hypothesis, design a rigorous protocol (hopefully) to control for various potential confounding variables, etc., and usually identify outcomes measured.    So if researchers propose A causes B, a very simple experiment may involve varying dose of A, measuring B, with the expected outcome (if it supports the hypothesis) being a significant dose-response correlation.

To prevent goal-post-moving, clinical trial registrations generally identify primary and secondary outcomes, often with a clinically significant change identified ahead of time.  But the outcomes of a study are what they are, regardless of what priority the researchers put on them, or what cause-effect they were investigating or designed the study to detect.

I consider Accidental Experimental Evidences to be very powerful.

Why?  Because ...
The nutrition and obesity and related literature actually abounds with such accidental evidences against the concept of sugar addiction (or specifically addiction to the fructose moiety).

In this study, purified diets as shown in the graphic were compared, the difference was 18% by weight fructose vs. 18% by weight of glucose.  This is one of those studies that must be interpreted with caution, because isolated fructose does not appear to exist much in nature.  Most fruits contain a combination of sucrose, glucose and fructose.  It's unsure whether the glucose from cornstarch or maltodextrin can metabolically "counter" the fructose.

In any case, the fructose-fed mice did gain more body weight as shown below left.  However this was not due to increased intake, as shown below right.  The weight gain could be attributed to reduced energy expenditure.    It is the lack of change in intake, however, that is the accidental evidence countering fructose-as-addictive.  If it were, the intake should have increased. 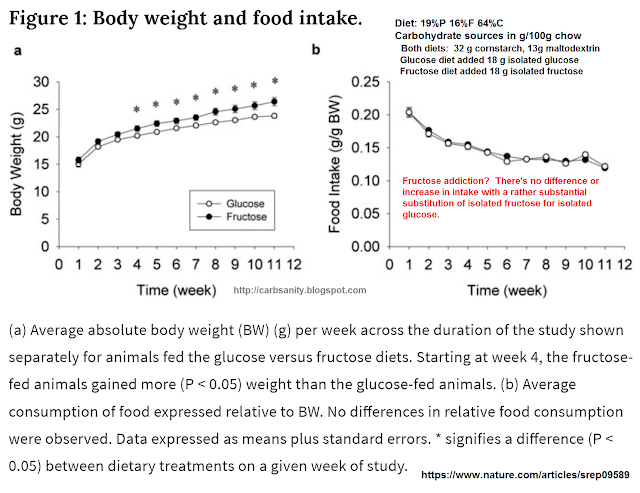 In this study, two strains of mice were fed one of four diets designated by Fat-Sucrose -- low or high in fat, low or high in sucrose.   One strain of mice was obesity susceptible, the other resistant.  I've included the diet compositions and full body weight results in smaller graphics below.    The full plot is also inset in the plot of just the low fat diets below.

Both strains of mice gained more weight on high fat diets due in large part to increased caloric intake.  However the low fat diets did result in the obesity susceptible mice gaining more weight.  However, opposite to what a sugar-addictive model would predict, mice fed a 60% sugar diet ate less and gained less weight vs. 60% starch.   The differential in intake and weight gain was amplified in the obesity susceptible strain, again counter to what sugar-as-addictive would predict.  Obesity susceptible mice consumed less of a 60% sucrose vs. a 60% starch diet and gained less weight. 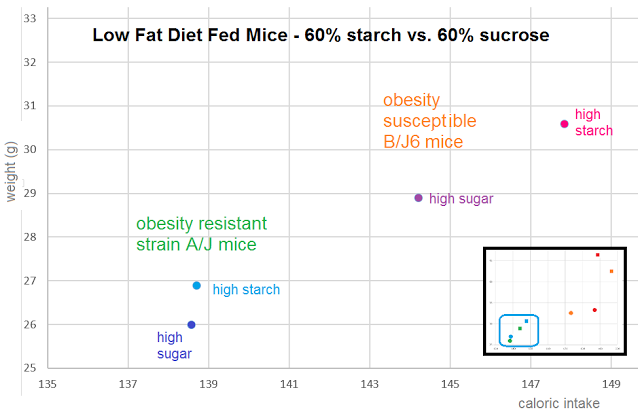 In this study, rats were fed a low fat (10%) "junk food diet" -- 35% sugar -- for six months.  They gained considerably more weight than rats fed a normal chow.   To measure "motivation", the rats were subjected to a lever pressing test to dispense sugar water (reward).  A sugar-as-addictive model would predict that rats fed a high sugar diet would press the levers to dispense sugar water more frequently.   The opposite was the case, these rats were "less motivated" as indicated by fewer lever presses.

The experiment was repeated with water-restricted rats and plain water as reward, and the same outcome was observed.  So the obese rats were less motivated in general.  A sugar-as-addictive model would predict a difference in motivation for sugar water vs. plain water.  No such difference was observed.