I was alerted on Twitter the other day to a "white paper" published by the True Health Initiative:

Ancel Keys and the Seven Countries Study: An Evidence-based Response to Revisionist Histories
Yesterday on Facebook, I came across Denise Minger's response to Dr. Zoe Harcombe PhD's response to the white paper.

The issue of Ancel Keys' now infamous Six Countries Plot (as opposed to his Seven Countries Study) is one that everyone continues to get wrong!

Four years after Keys’ initial paper was published, Yerushalmy and Hilleboe published a critique in July of 1957, featuring a 22-country graph showing Keys’ correlation substantially weakened. 6 In September of 1957, Hilleboe published another 19-page paper focused on the same topic covering similar points. 55 Of the 15 tables and graphs included in Keys’ 1953 paper, which relied on a thorough history of clinical, experimental, and observational evidence, Yerushalmy and Hilleboe’s July 1957 paper chose to focus on a single piece of evidence, the six-country graph. 6 They took issue with Keys’ selection of countries, since they noted that data on dietary intake and heart disease mortality existed for 22 countries. 6 Yerushalmy and Hilleboe, however, failed to consider that food intake and heart disease incidence were probably influenced by the war and Nazi occupation. In fact, numerous countries included in their graph — Germany, Norway, the Netherlands, France, Denmark, and Greece — experienced atypical food availability and intake in the years prior to and directly after the war, the effects of which had been mentioned in Keys’ 1953 paper. 7,47,51

I disagree that the first part (That Keys, et al. selected countries with a specific outcome in mind) is made in error. I think that this criticism of Keys is fair. The six countries graph showed two important things:
i) Keys did exclude much of the available data to produce a graph of 6 countries (when data from 22 countries were available (Ref 7)) and this tells us something about his scientific integrity.
ii) Keys knew which countries to include in the Seven Countries Study. The six countries graph had Japan on the bottom left, USA on the top right and Italy firmly on the line. Keys could be confident, therefore, going into an expensive and lengthy study that his hypothesis on dietary fat and heart disease was likely to be supported.

This contention was addressed directly by the white paper, and I've written about it as well (https://deniseminger.com/…/the-truth-about-ancel-keys-weve…/). The quality of data for many of those 22 countries was poor, especially when it came to classifying deaths from heart disease. A WHO paper on miscoding and misclassification (http://www.who.int/healthinfo/paper12.pdf) is informative on this topic, and so is the paper by Yerushalmy and Hilleboe written as a response to Keys's graph (https://thescienceofnutrition.files.wordpress.com/…/fat-in-…).

In summary of the above: of the 22 countries Keys had data for, three (France, Chile, Mexico) had a track record for filing deaths from "arteriosclerotic and degenerative heart disease" under other categories (especially "other diseases of the heart"), resulting in questionable data that underestimated coronary heart disease mortality. Mexico didn't even have a proper death certificate system in place until the late 1950s -- *after* Keys had made his graph -- and should be omitted from analysis for that reason alone. In his 1953 paper discussing the six countries graph, Keys states that data for Western Germany and Finland was unreliable due to postwar population shifts; Iceland and Luxembourg didn't have enough citizens to yield reliable data; and Spain lacked vital statistics in the late 1940s. Likewise, Norway, Denmark, the Netherlands, Sweden, Greece, and Austria were all affected by wartime changes in food availability that appeared to affect mortality and/or diet records for the period Keys had data for. That leaves eight countries still on the table. Maybe a case could be made that Keys cherry-picked six out of those eight to make his curve look even more compelling, but there's solid rationale for excluding most of the countries that didn't make the cut.

I wrote about this two and a half years ago in:  Ancel Keys ~ It's Time to Appreciate a Real Researcher ... ... or at least stop lying about him and promoting bad research reviews.

In 1957, data existed for 22 countries.  This was NOT the data set from which Ancel Keys is alleged to have cherry-picked!  He couldn't have done so in 1953 because the data hadn't even been generated yet.

This is not an insignificant point.  Folks reading DiNicolantonio, or Teicholz, or Bailor, or Taubes, etc. are led to believe that Keys merely "cherry picked" 6 countries out of 22 to construct his infamously near-perfect plot.  This willful misrepresentation of events has repeatedly cast aspersions on Keys' character.  It would have been an egregious thing for Keys to have had access to the same data sets and simply selected only those points that fit his hypothesis, while discarding those that did not.   There is no evidence of this.  Even Y&H only say so much as the following:

Since no information is given by Keys on how or why the six countries were selected for Fig. 1, it is necessary to investigate the association between dietary fat and heart disease mortality in all countries for which information is available.

But as has been pointed out before, Keys DID give an explanation:

So far it has been possible to get fully comparable dietary and vital statistics data from 6 countries.

Y&H ignore this statement.  They do not challenge it.  And they didn't demonstrate it to be a misrepresentation by producing more data from the time period Keys used.   Their "proceedings" article was presented at a conference in April of 1957.  Their heart disease mortality data was from the WHO Annual Epidemiological Reports, 1950-1953.  Both on their plot, and on a table in their appendix, the mortality data was identified as coming from a three year period from 1951-1953.    Their food consumption data used for fat intake statistics came from the Food and Agriculture Organization of the United Nations, 1951-1954.  In other words:

Yerushalmy & Hilleboe's data  did not yet exist  at the time Keys  gave his talk in January of 1953.

These references appear to be single reports that span to include 1953 for mortality and 1954 for the diet data.  You can't construct a scatter plot without data for both axes.  Therefore, the earliest the x-axis diet data would have been available would have been 1955, at least two years after Keys gave his talk.  Given as Keys' "published graph" was apparently the sole impetus for Yerushalmy & Hilleboe's dissertation on correlations and statistics, perhaps a better question might be:

Why didn't Yerushalmy & Hilleboe use all of the data  supposedly available to Ancel Keys from 1948-1949?

Keys could not have used and cherry picked from their data, but they could have produced additional data if it were available to Keys.

In addition to the years, Yerushalmy and Hilleboe used data from a different classification of heart disease.  ....


Dr. Zoe Harcombe PhD doesn't deserve to have a PhD for her "research" on this topic.

This was her thesis: An examination of the randomised controlled trial and epidemiological evidence for the introduction of dietary fat recommendations in 1977 and 1983: A systematic review and meta-analysis, and if Chapter 3 is any indication. Just shake my head over and over. Harcombe published this research in the BMJ's "pay to play" Open Heart journal: Evidence from randomised controlled trials did not support the introduction of dietary fat guidelines in 1977 and 1983: a systematic review and meta-analysis (see Zoe Harcombe and Adele Hite's Hyper-System(at)ic Meta-Statistical Bovine Fecalemia, the correction still doesn't acknowledge that one of the co-authors is an editor of the same journal!)

It's really a sad reflection on the current state of nutritional research that a doctorate could be granted based on "research" of this nature. But to the point of "how many countries", Harcombe at least takes a lead in chastising "her side" not to conflate the Six Countries Plot with the Seven Countries Study. She still impugns his reputation, but more interestingly she gets things somewhat correct regarding the numbers of countries (I'll break this up and link to the actual references)

Keys presented his graph of six countries with the explanation “So far it has been possible to get fully compatible dietary and vital statistics data from 6 countries” (p.133) (Atherosclerosis: a problem in newer public health. J. Mt. Sinai Hosp. N. Y. 1953;20(2):118-39).

This was refuted by Hilleboe (Some epidemiologic aspects of coronary artery disease. J. Chronic Dis. 1957;6(3):210-28) , who presented Yerushalmy’s data for 12 countries for heart disease and calories derived from fat in the diet.


That’s where the ‘fudging’ was done and exposed. It’s a shame it took so long for the rebuttal (1957), after the original presentation and paper (1953). Keys responded to the Y&H critique. His response was published as an editorial in the Journal of Chronic Disease (Epidemiologic aspects of coronary artery disease.  1957;6(5):552-9). But the debate was essentially over by the end of 1957.

If one "analyzes" the progression here, you see that Yerushalmy and Hilleboe are ADDING countries.  These are again from early 1950s WHO data, etc. whereas Keys' data was from 1948 and 1949 from different sources.

You would THINK that Harcombe would have picked up on these numbers??  Nope.   She still concludes:


"That’s where the ‘fudging’ was done and exposed. "

No.  There was never any fudging of any sort in the Six Countries Plot.  In her summary of the critique of the white paper, Harcombe concludes:


"This hardly warrants a white paper."

I contend her "research" hardly warrants a doctorate.

I'm just going to leave these here from the Hilleboe paper. 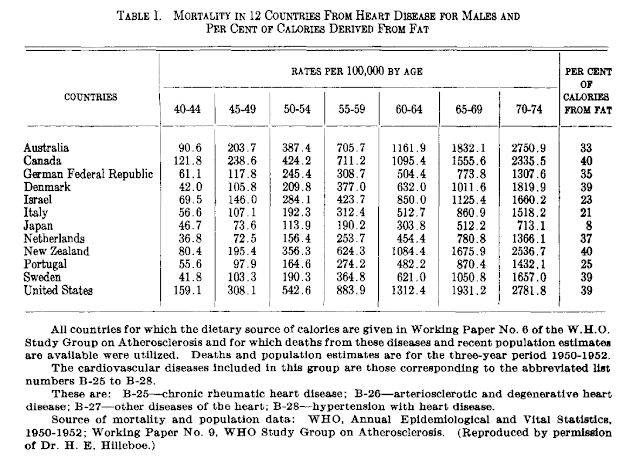 Someone please alert Nina Teicholz that one third of these countries were consuming a dangerously low (less than 30%!!) fat diet.  Oh the poor women and children! [/snarkasm] 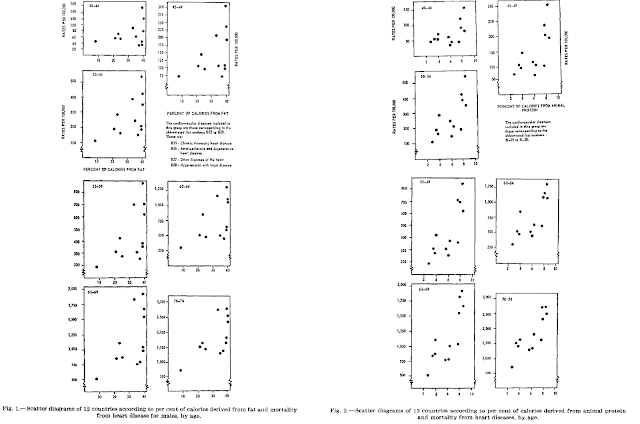 The plots above are progressions by age groups correlations, CHD mortality on the y-axis, correlated with fat on the left and animal protein on the right.   Hilleboe makes the point, essentially repeated by Yerushalmy & Hilleboe in the 22 Countries Paper:  The correlation with animal protein is more significant than that with (all) dietary fat.   They are both statistically significant for the 22 countries.

Submit your website or blog now for indexing in Google and 300+ search engines!