The results of the $12 Million Dollar NuSI-sponsored study, headed up by Dr. David S. Ludwig, are finally out.

While the good doctor is making the rounds touting them as evidence in support of the Carb-Insulin Hypothesis (TWICHOO in these parts), a review of the raw data made available to the public casts grave doubts on his victory lap.  This study built upon the "promising" results of the 2012 study:

Effects of Dietary Composition on Energy Expenditure During Weight-Loss Maintenance

This post focuses on comparisons of Study Design between these two studies, some improvements, and the ultimate failure that renders the primary outcome data suspect, if not outright useless.  (And I don't say that lightly!)


Hello blog!  My dear readers!  The drought might be over here at the Asylum.  I hope anyway :-)


I will likely be back at some point to edit this out and/or flesh in some links to background, etc., but I don't wish to waste time on "book keeping" at this time.

A recent study published in BMJ, is making the rounds with copious cheerleading by lead investigator Dr. David S. Ludwig.  This study, dubbed Framingham State Food Study or FS², was the largest of the original three studies funded through (then) Gary Taubes' and Peter Attia's Nutrition Science Initiative, NuSI.

Make note there are two supplements and a link to the data that I'll provide here:  https://osf.io/rvbuy/ .  I downloaded that data and have been conducting various analyses that I will be sharing in future posts.

This study was touted as that "good science" the nutrition world has been missing for decades, and one that would add meaningful data to what causes obesity.  It is modeled on a study by Ludwig's research group published in 2012:   Effects of Dietary Composition on Energy Expenditure During Weight-Loss Maintenance

While Ludwig and co-lead investigator Cara Ebbeling PhD made some significant changes to the protocol for the "expanded repeat" of the 2012 study, I want to kick my analysis of the latest study off with a critique of the study design.

Several other scientists and journalists can't help but fall over themselves in praise of this study.  "Amazing!" ... "Tour de force of nutrition science" ... "a unique study because of its size and rigor" ...  I'm going to call it like I see it:  NONSENSE.

Can the scientists and journalists please stop slobbering over this long enough to recognize that at the very least, Ebbeling et.al. 2012 was a test run that gave these researchers much insight into how to improve their methodology.  There's absolutely nothing ground breaking or innovative in adapting a crossover design to a group comparison study.  NOTHING.  There's nothing "really complex" about the design.  For all its "meticulous" nature in prepping foods and weighing  to within 0.1 or 0.5 grams (depending on portion size) ... other parts of the design are anything but meticulous in ensuring some critically important things regarding the primary outcome:  Total Energy Expenditure by DLW.

Let's cut to the chase with this graphic comparing the intervention time frames: 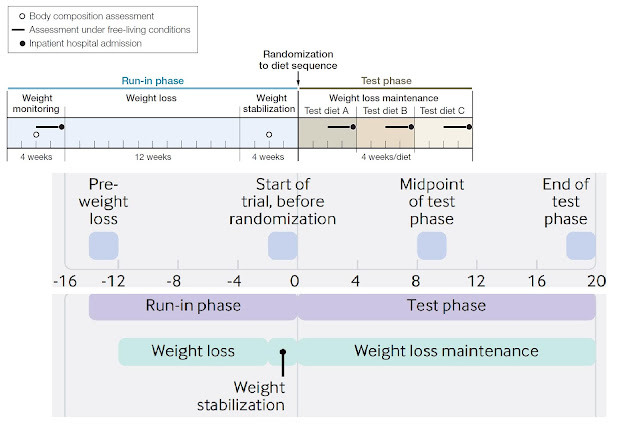 I aligned these as best as I could, the 2012 study on top, the current study on the bottom.  Let us compare and contrast (you will need to refer to supplements and original articles for details).

Important Note:  The DLW-TEE is a "free living" test that is conducted over a period of 14 days = 2 weeks.

*I accessed available data and include only those for whom complete energy assessments were available, and deemed weight compliant (within  +/- 2kg start of test phase start weight):   41 LC, 37 MC and 31 HC.

2012:  Monitored for weight stability of "usual diet" etc. for four weeks.  Gathered data for TEE by doubly labeled water method (DLW), intake, and REE during the last two weeks of monitoring.  These were baseline values used for comparison.

2018:  Two weeks DLW-TEE and REE, essentially "off the street", NO assessment or reporting of baseline intake.

"When necessary, we made adjustments in energy intake to achieve weight loss and stabilization during the run-in phase. We allowed the duration of the run-in phase to vary among participants, to account for individual differences in the rate of weight loss"

2018:  Used Mifflin-St Jeor and a fixed activity factor of 1.5 to estimate energy requirements.  Subjects restricted to 60% energy requirements for fixed 10 week period to target ~12% weight loss**.  There is some indication of altering intake for those not losing weight, but no mention of individualized time or targeting a minimum percentage.

2012:  Four weeks total.  Intake ramped up by one-quarter of the additional calories for four days.    No DLW-TEE or REE data collected during this phase.

2018:  Two weeks with no indication of ramping up, during which DLW-TEE and REE were assessed.

I believe it is critical to stress that the entire reason for a run-in phase in any study is to ensure as much consistency as possible for factors that might influence the results of the test phase.  In this case, since both studies were looking at effect on TEE in weight-loss maintenance for different diet compositions, the following factors were important:
As such, except perhaps for some (presumably minor) differences in the rate and duration of weight loss, the run-in for the 2012 study is pretty solid.  There was also a period of monitoring before gathering pre-study data used as a baseline anchor.  It is fair to say that not only did the researchers fail to improve on this study design, the significantly shortened run-in phase of the current 2018 study represents a giant step in the wrong direction, and is problematic to say the least.  I would go so far as to suggest that it is so problematic we might well be dealing with GIGO:  Garbage In - Garbage Out.

To itemize:
Leading up to this study, there was considerable focus on metabolic adaptation to weight loss.  As such, the combination of the last two bullet points represent "fatal flaws" in the Study Methods.  They should have:
I'm sure there will be those who will cite budgetary constraints for such a large study, but for all the places to cut corners, but the critical feeding phases are not where the cuts should have been made.

All of this said, probably worst of all is that the issues with the accuracy of DLW-TEE when weight is not stable are well known.  As such:

The 14-day test, that became the "anchor" for changes in energy expenditure, should NEVER have been done during the same 14 days used to stabilize weight immediately following weight loss.

Caloric level for all three diets established as intake from the weight stabilization phase of run-in, regardless of weight fluctuations.

Caloric level started at weight stabilization phase of run-in and adjusted periodically to ensure weight stability to within ±2 kg of reduced stable weight.

Let me begin with some praise for the researchers in correcting some issues from the 2012 study, most prominently the compositions of the test diets.  In 2012, protein -- with its known increased thermic effect -- varied among the diets, in the current study, protein was fixed at 20% across all test diets.  Thus they were directly testing carb vs. fat including the extremes that directly flipped contributions of each from 60% for the high macro, 20% for the low macro, and the middle split them 40%-40%.  Well done!

My major issue with the diets in the current study is the ad libitum snacks they provided to subjects who were losing weight because they couldn't eat larger meals.  WHY did these have to be  ad libitum???   It seems to me that they could have made some macro-friendly granola bars, muffins and/or shakes in pre-measured 100 cal increments where subjects were instructed to consume one a day, two, etc. until weight stabilized.   For all the meticulous accounting of macros and calories in the dietary delivery system in this study, why blow it with this??

Clearly a 20 week test phase on a consistent diet is a huge improvement of the prior 4 weeks of vastly varied diets.

My major methodology issue is with a carryover of a problem from Run-In.  The study design changed several times, and most importantly instead of using the "off the street" baseline TEE as anchor, they changed it to the "weight stabilizing" TEE.  It's repetitive, but to use this highly problematic measure as baseline anchor for the test phase is a fatal flaw.

It is my understanding that (my favorite "young biophysicist") Kevin Hall PhD will be diving deep into this aspect of the results of the study.  I'll be sharing that as it becomes available.  For myself, I'm focusing more on the discrepancies (often rather large, and in opposing direction) between the reported intake and DLW-TEE -- values that SHOULD be relatively similar in a study such as this.  I've embedded the individual energy plots below (sorry for the resolution) that I shared as a teaser on Twitter.  You can make out the trends in the REE, TEE and Intake.  I think it is most telling that REE essentially flat-lines across the board, while TEE and Intake track well rather more rarely than frequently.  I will put a lot of numbers to this in a future post (or more).   Stay tuned!

I'm unsure if I'll address the gross inconsistencies between intake and TEE (that the above thumbnail plots show) first, or address some general interpretations of the results first.   Both are in progress, I'll link here when published.