Continuing on with discussion of:


No summary for this post.  Here are links to earlier parts in this series:


Part I: Critique of the Study Design

Part III: Some "Early" Lessons:  In this most recent post, I discussed the relationship between measures of insulin (both fasting and 30 minute OGTT response) and weight loss during the Run-In Phase.


Prior to the weight loss phase, subjects were assessed for various metabolic markers.  One of these was designated as "Fasting insulin resistance by HOMA (post hoc effect modifier)" and included ONLY in the Supplementary Materials.

This is a value calculated by the product of fasting insulin and glucose -- for the units reported, the formula was:
HOMA-IR = (Insulin x Glucose)/405

Normal HOMA is up to 1.5 (this varies with source), and "severe insulin resistance" is generally considered HOMA over 3.

Here's how the BSL HOMA measures worked out.  Overall, we have a very insulin resistant group of subjects in this study!

A common sentiment, especially in low carb circles, is that insulin resistance makes weight loss more difficult.  Some go so far as to claim that one must first "heal" their IR before they will be able to lose weight.

Is this true?    Apparently not!

Below I've plotted the weight loss for the 105 subjects (successful completers with full baseline and energy expenditure data) I've been analyzing for other posts.  I generated quick scatters using data for all subjects who completed the Run-In, and the result was similar. 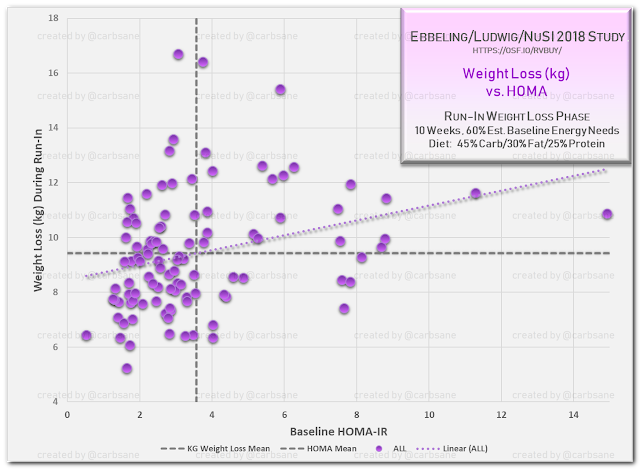 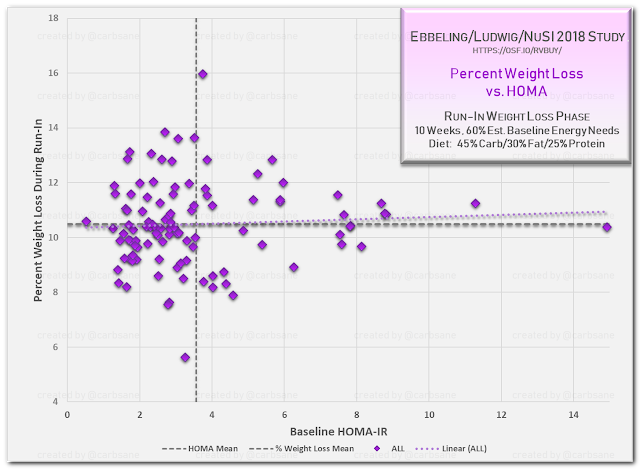 It is important to stress that I am NOT trying to establish a positive relationship between HOMA and weight loss, I doubt the trend lines in the above plots are statistically significant.  In the case of weight loss as a percentage of baseline weight, the trend line is almost identical to the mean weight loss!

That said, TWICHOO / CIH predicts that weight loss should be significantly less for those with insulin resistance.  Clearly this is not the case.

Eight years ago, on November 17, 2010, I posted the following blog post

This discussed the following study (albeit briefly at the time):  Does the Presence of Metabolic Syndome Influence Weight Loss in Obese and Overweight Women?

Results: After 3 months, the subjects with metabolic syndrome lost more weight than those without (6.62% vs. 4.50%; P < 0.05). There was a positive correlation between the percentage of weight loss and the number of the components of metabolic syndrome present at baseline (Spearman ρ = 0.329; P < 0.01). Furthermore, patients in the quartile with the highest homeostasis model assessment index (HOMA-index) lost more weight than the remaining subjects (8.17% ± 3.34 vs. 5.59% ± 3.87; P < 0.05). These results were significant, even after adjustment for the medical treatment prescribed.