- March 11, 2013
One more on the measurement side of things since these type posts are easier to put the finishing touches on to get out the door.  This is another older paper, and I'm trying to track down more info on newer/current analyses and their specificity.  Unlike the last discussion here, I want to focus on the secretory capacity of the  β-cell through the progression of diabetes.

Serum proinsulin levels at fasting and after oral glucose load in patients with Type 2 (non-insulin-dependent) diabetes mellitus (1988).
I emphasized the fact that no medications were being used by the study groups in this study.  Even though the previously discussed study found no differences in those receiving some oral medications, that potential confounder (action on the β-cell) is not at issue in this study.

I think it's a pretty safe bet that there was some cross-reactivity going on with split proinsulin based on the levels seen in the previous study, and the insulin levels are likely still inflated by the split proinsulin.  But in this study it's not the fasting levels that are the most interesting, it is the OGTT results.  Going from left to right you have the normoglycemic, IGT and the four levels of diabetic (based on fasting glucose levels). 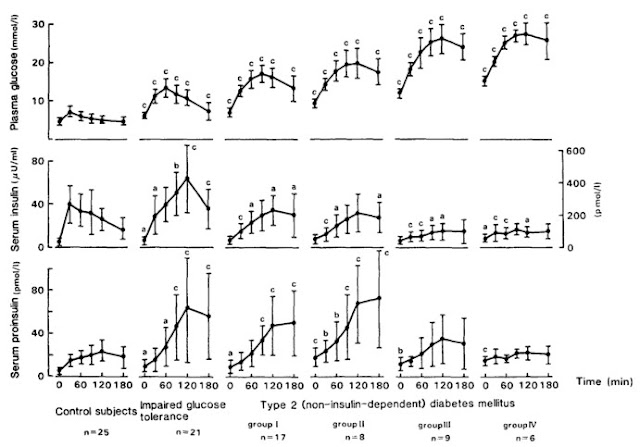 Forgetting the proinsulin stuff here, we see that we already have beta cell dysfunction in impaired glucose tolerance.   The take home message here to me would be that if you have IGT, NOW is the time to do something about it!!  Some have misinterpreted my posts like Blood Sugar 140 to mean that there is nothing to be concerned about with impaired glucose tolerance.  Not what I'm getting at with such posts.  But this study pretty clearly demonstrates that the mild hyperglycemia is due to inappropriate insulin secretion -- but what is "inappropriate" is highly variable -- look at those error bars on the first time point for controls vs. IGT, there is significant overlap there!  I look at the proinsulin curve and wonder what the split proinsulin looks like.  It seems pretty clear that with IGT you already have problems in your shipping department of the β-cell, but you still have that initial acute response to glucose (the GSIS) that is absent in all of the diabetics.

The results here now set the stage for our discussion on the etiology of diabetes as a disease of pancreatic β-cell dysfunction -- insulin deficiency -- as primary defect.   Putting together the results here with the previous study on proinsulin, there is reason to question whether there is true postprandial hyperinsulinemia in the glucose intolerant, mildly diabetic population.  The "explosion" of proinsulin seen very likely indicates split proinsulin (also not active) secreted as well.  The basis of insulin resistance is that more insulin is required to perform the same function, but what remains unclear is whether what is being measured as insulin is indeed functional insulin or some other molecule.
Hyperinsulinemia Impaired Glucose Tolerance (IGT) Insulin Type II Diabetes

china tours said…
What a beautiful dragonfly and what wonderful post!!I am a china tour lover,You can learn more: China tourism | China travel service | China travel
May 28, 2013 at 11:35 PM