Hypothalamic Damage and Its Role in Obesity ~ Part I: Background and Hypothalamic Obesity

It's no secret that my blogging has fallen off. There are a number of reasons for this, but one of them has been that I start some train of thought or down some research rabbit hole, and just never get around to finishing a post to my liking ... then things move on. This post is such a one. Unfortunately Blogger doesn't date drafts (or I didn't note it before I opened the draft with edit), but the original introduction referenced events that would indicate sometime in October 2015!

It was also around that time that Robert Lustig came out with a study on NAFLD in children. Lustig has made a comeback in my comments section here of late. He has parlayed a career as a pediatric endocrinologist into a bizarre career as a celebrity doctor/researcher who blames obesity and all evils on one molecule: fructose. I say bizarre because he makes unfounded claim after unfounded claim after unfounded claim as regards fructose. Many of his offerings are backed by the University of California academic "credibility" where seemingly nobody in the sciences he mangles seems willing to vet or speak out against such misinformation. How he transitioned from a hypothalamic-model of obesity to fructose being the singular dietary bad guy is beyond me. But this post was the first in a series looking at such a model to explain "essential" or "ordinary" obesity of the modern day epidemic variety.

Lustig has been a go-to expert for a variety of more or less popular schlockumentaries, the most prominent of which might be Fed Up. So now we will be treated to Lustig on film in Tom Fat Head Naughton's latest assault on nutritional science: Fat Head Kids. I can think of nothing more despicable than to lie to children in furtherance of some bizarre agenda. Way to go Tom, you should be ashamed. More on that in a followup to Tom FatHead Naughton's Kooky thermodenyiK Katastrophe.

So I'm publishing up this incomplete post in advance of a somewhat detailed discussion of one of the studies.

I'd first like to begin with two acronyms and definitions, and then draw some distinctions. I want to make sure that when I use certain terms, there's no confusion.

OO = Ordinary Obesity:  In the literature this is also referred to as Common Obesity or Essential Obesity.   The basic premise here is this is is the obesity that is on the rise globally and seems to hit nations and cultures as they transition to modernity.

HO = Hypothalamic Obesity:  In this post I will limit this definition to the obesity that develops following physical damage to the hypothalamus usually due to surgery to remove tumors in the vicinity.  Technically, according to this paper,

Hypothalamic obesity is an intractable form of obesity syndrome that was initially described in patients with hypothalamic tumours and surgical damage.   However, this definition is now expanded to include obesity developing after a variety of insults, including intracranial infections, infiltrations, trauma, vascular problems and hydrocephalus, in addition to acquired or congenital functional defects in central energy homeostasis in children with the so-called common obesity.

Since most of the research on HO involves surgical cases, I'll limit the definition to those cases here.    Recently there have been a number of studies regarding "damage" to the hypothalamus in response to certain dietary factors.  I use quotation marks there, because this damage is not the same as that seen in HO.  There are a few papers, but I think this one is probably most familiar to readers here:  Obesity is associated with hypothalamic injury in rodents and humans.  Most will also recognize one researcher in particular, Stephan Guyenet.  Thus I will coin a third acronym:

HIAWO = Hypothalamic Injury Associated With Obesity:  A collection of phrases from this paper as to what constitutes injury include:  reactive gliosis, immune cell-mediated tissue inflammation, recruitment of microglia and astrocytes, elevated hypothalamic levels of Il6, Tnfa, Socs3, Ikbkb, and Ikbke mRNA. As defined in the paper:

Markers of gliosis during early HFD feeding:  Activation, recruitment, and proliferation of microglia (macrophage-like immune cells of the brain) and astrocytes, collectively termed “reactive gliosis,” are hallmarks of the brain response to neuronal injury.

I highlighted the term response there just to draw a distinction.  While this infiltration could result in a morphology that one might term damaged/injured in its own right (e.g. how could the organ or cells function with all that "junk" lying around) these are not neuronal injury per se.  Earlier research on high fat diets discussed apoptosis (programmed cell death).  I would consider the killing off of functional neurons to be the very definition of damage!   I don't mean to nit pick, rather I'm just pointing out the distinctions so there's no confusion.

Back in the summer of 2010, during the early days of blogging here, I was doing a lot of work at our former home trying to get it on the market to sell.  There was no technology at the place, you couldn't even get reception on a radio, and I had a pretty basic cell phone/package when I first started.  Therefore when I was home at my usual residence I would download as many podcast and radio shows as I could to the microSD, pop the card in my phone and listen to them as I worked, supervised contractors, or quite literally watched paint dry.  One such podcast was with YouTube phenom, Robert Lustig.  Before he became a fructophobic crusader, Dr. Lustig was a pediatric endocrinologist treating, amongst other things, hypothalamic obesity. He was also involved in a fair amount of research in how to go about helping and treating these children.  Hypothalamic obesity is to "ordinary obesity" what chopping off half a foot is to foot binding in terms of horizontal foot length.  (I'll spare you those images!)

I have to say, that after watching the YouTube video, and how Lustig equipped himself in the face of criticism by Alan Aragon (see comments for Lustig's responses) I found it almost unbelievable that this man had at one time been involved in serious research.   So I listened to this podcast with interest and I recall having the heart strings pulled by his descriptions of the children and parents with whom he had worked.

Lustig focused his discussion in the podcast largely on the insatiable appetite and general lethargy of these kids.    This fit in nicely with the "internal starvation" and blood-sugar-rollercoaster mechanisms by which -- through the evil actions of insulin -- the likes of Gary Taubes identified carbohydrates as the ultimate culprit.  Lustig was quick to blame insulin, but wanted to make clear he didn't blame carbs per se, perhaps to distinguish himself from Taubes?   Indeed the introduction ends with:


Understanding the central role of the hypothalamus in the regulation of feeding and energy metabolism will help us gain insights into the pathogenesis and management of common obesity.

Fair enough, but it helps to keep in the back of one's mind that there may well be more to this than meets the eye.  Even if ordinary obesity is characterized by what appear to be milder forms of the same characteristics of HO, there may NOT be applicable dose-response or cause-effect relationships.   Is it a milder form of the same hormonal and physical mechanisms?  Or is it something different entirely?  Or ... is it somewhere in between ... ? 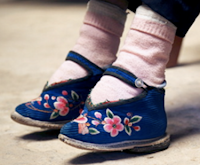 If it could be established that dietary (or environmental) factors effectively altered the function of the hypothalamus, then the HO model carries more weight.  I can surely understand the desire to find such a factor or factors, because it would certainly make treating the condition easier if we could apply the same treatments we do in HO.    This by no means implies an easy "cure", but it would put us ahead in the game.

NOTE:  This next paper, which was grossly "mis-remembered" by Lustig in an interview with Tom Naughton (who didn't bother to verify the outrageous claim) is my main reason for publishing up this unfinished work.


This is an older paper  -- Bray & Gallagher, 1975 (full text is free by clicking "Article as PDF")  -- looking at HO in 8 subjects and comparing it with OO (called essential obesity). 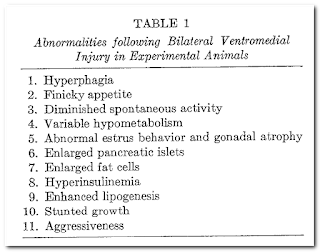 The introduction contains a rather extensive review of the literature to date at the time -- over 40 years ago -- including animal studies.  It is stated in the text that the primary mechanism leading to the obesity is hyperphagia (overeating!!), with reduced activity and depressed metabolic rate being of lesser importance.


In this 1967 study,  lesioned rats were pair fed to insure normal intakes and accumulated more fat.  Now this can be interpreted in a number of ways, and if history is any clue, the "alt hyp" folks will do so in the most feasibility challenged manner possible.  Some combination of activity and body temperature lowering must occur to lower calories out in order for this to occur.  "Internal starvation", a state I imagine is most unpleasant cannot persist forever and would result in body recompositioning towards a rapid death.  I can only imagine the torture of a child so afflicted who was denied food when the source of their appetite was unknown.  In the end, the obesity of HO results from an energy imbalance, whatever the origins.


If the mechanisms of HO are to apply in OO, it would look something like this:

This, by the way, would be consistent with TWICHOO, as Gary Taubes identifies the carbohydrate as the dietary agent of doom.  The key difference is he asserts a direct route from normal postprandial insulin response to hyperinsulinemia to fat trapping obesity,  whereas an HO corollary would require hypothalamic damage.   TWICHOO could still hold if dietary carb glucose or spikes caused the HIAWO.  But this model is also completely consistent with your garden variety energy imbalance model -- or "gluttony and sloth" if you want to appeal to emotion.  The main new thing here is that folks are unaware that something is damaging the hypothalamus and throwing it out of whack thus driving overeating and/or sedentary behavior.

For this scheme to be valid, I can see at least two things that must be observed:
Herein, I believe, lies the problem, or rather problems, for a hypothalamic damage "switch" model for OO.  Furthermore, despite some less-than-stellar statistics, there are numerous people who do successfully reverse their obesity in a wide variety of ways.  This should be next to impossible without intervention, and the interventions effective for HO appear to have limited, if any impact on OO.

Here's where I left off ...  I'm publishing this up as is with hopes to continue on soon.