Chef Pete Evans teamed up with Charlotte Carr (minor Australian celebrity "mommy blogger" married to another minor Australian celebrity) and some nutritionists an naturopaths to concoct a recipe book of baby foods:  Bubba Yum Yum The Paleo Way: For New Mums, Babies & Toddlers. Thankfully, it appears that if this ever does make it into publication, there is enough buzz on the internet that hopefully unsuspecting moms don't get fooled.  However I fully support any and all efforts that would keep this book from being published without some serious warnings an corrections.  In the case of the formulas, they should conform with whatever the makers of commercial formulas must in terms of ensuring that a recipe touted to mimic breastmilk actually does.

So the Dietitians Association of Australia (DAA) took notice and issued the following alert.   A huge shout out to Pete Evans Caricature (@peteevansnot on Twitter) for bringing both exposure and humor to this ongoing situation.  Here are two posts you may wish to check out:

By far the worst of it is the DIY bone broth and liver based baby formula, which is described in the book as having been derived from this recipe published on the Weston A. Price Foundation website.   As you can see from either the release itself or by enlarging my screencapture, the DAA took the greatest issue with potentially harmful levels of some nutrients.  By far the most buzz has been generated over the issue of very high levels of Vitamin A.    I absolutely will be addressing that issue, because one of my favorite "experts" weighed in on this heavily, and provided yet another example of why one should not look to folks like her for accurate information.    In this post, however, I want to focus on the macronutrient composition of the baby formula.  Specifically ... 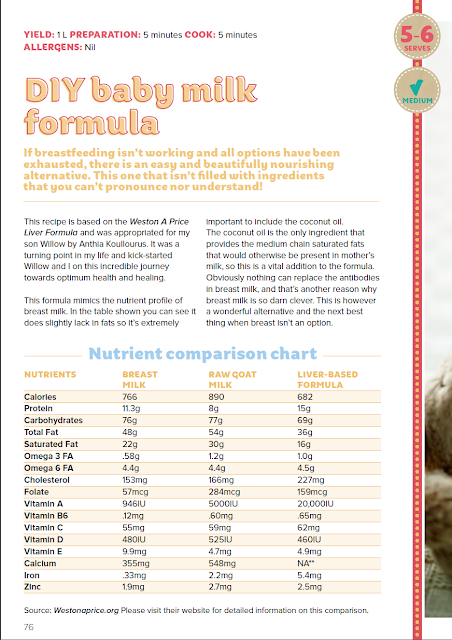 Now my link above to the WAPF page contains the side by side comparison of breastmilk to three of their formulas (a cow's milk one is omitted here), and not to raw goat milk.  But this is a minor error as the authors are trying to convey the similarity between their liver-based formula and breastmilk (begging the question why goat milk/formula is included at all, but ...).

No, the troubling thing is that footnote there, as they are specifically CLAIMING to be using the WAPF recipe.   I've taken the liberty to do a comparison: 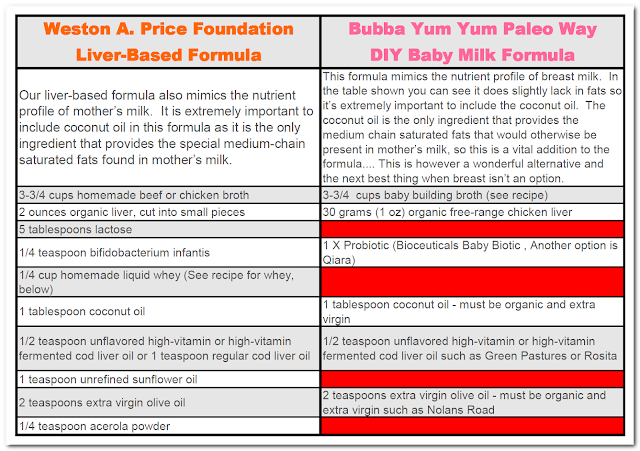 The Bubba Yum Yum formula is "paleo" -- they left out the dairy components and veggie oil, an for some inexplicable reason, the acerola (Vit C).    For some reason they only used half as much liver -- perhaps out of concern regarding the Vitamin A content?   These are serious changes in the nutritional content of the formula as shown below ... and you can see why I've renamed Evans & Co's Bubba Starve Starve.

I can only surmise that WAPF has remained silent on this issue (unless I missed something?) so as not to draw further attention to the Vitamin A issue.  After all, the liver recipe is in Enig & Fallon's Nourishing Traditions book!  But this is quite an "adaptation" of their recipe.

I'm actually very disappointed in the DAA for not bringing the carbohydrate issue to the fore.   The media release claims an indepenent analysis, so it would seem odd that they would do this on the WAPF formula instead of the one in the book.  I could understand the oversight if they had used the WAPF numbers ... this just seems "off".

So the authors apparently revamped the formula in an attempt to save it for publication.  This would now appear in the 6-12 Month section, and has been renamed "Happy Tummy Brew".  This image is straight from Pete Evans Caricature. 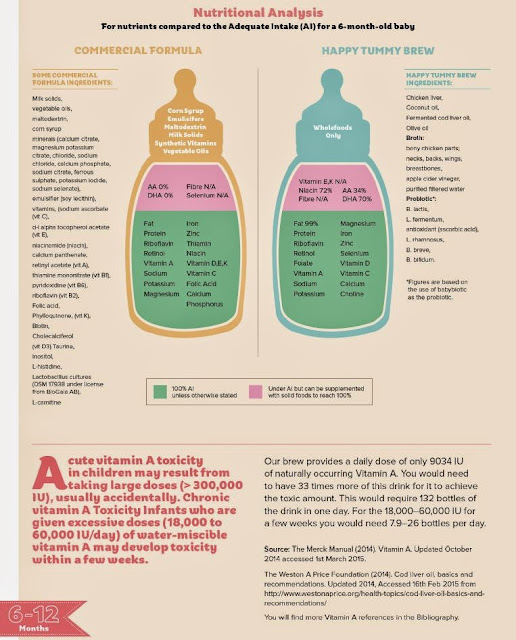 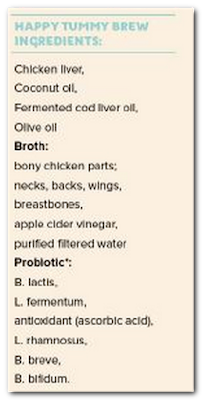 Note the focus on Vitamin A.  I suppose they consider roughly 10X the quantity in breastmilk to be appropriate.  In media reports Charlotte Carr mentions that they added back the Vitamin C and added calcium.  However, there's no carb added as can be seen from this zoom-in on the ingredients list.

Also, the comparison is now to commercial formula vs. breast milk which is somewhat of a distinction without a difference.  This is being "marketed" as a breastmilk substitute and this is just wrong.  Even were they to fix the Vitamin A issue, there is a crucial component missing.  The component which is present in breast milk in the most consistent concentration is gone entirely from this one.

Go to about the 13 minute mark of this video showing Sarah Pope making the WAPF version:

14m:50s:  "Five Tablespoons of lactose are added, as mother's milk is very rich in lactose, and lactose is critical to the development of the nervous system.   If your child has an allergy to lactose, substitute glucose or organic sucrose instead."

This cookbook contains various other recipes for complementary foods to be introduced beginning BEFORE 6 months even.  There are other safety concerns about these recipes that I'll address in the BabyGate Files addressing the Vitamin A issue.  But for now, while this formula is protein-neutral to slightly deficient, if a Mum were to introduce certain foods per the recipes and serving sizes, this infant could easily be getting more than his/her share of protein.   Excess protein intake in the first two years of life has been linked to increased body weight and fatness, and this is more than just an association -- there are reasonable hypotheses put forth as to the mechanism of this causality.  (see this edition of BabyGate)

Liver paté:  500g liver (just over a pound) with broth, 2 cloves garlic and 1T coconut oil, pureed.  This recipe is listed as 6 servings.

This works out to over 80 grams of liver per serving, with the oil we have:  20 grams protein, 7-8 grams fat, and a whopping 1 gram carbohydrate.

If this baby isn't getting regular formula or breastmilk, the poor thing is still starved of carbohydrate.  If this is complementing the Happy Tummy Brew, this baby is going to be off the charts on protein.

Pro-teeny purée:  400 g beef, lamb or chicken with broth.  This recipe is listed as 3-4 servings.

A little perspective here:  We are still in the complementary foods area here where baby might be getting breastmilk, but this is a LOT of protein.  Two to almost three times the daily amount if fully breastfed (as would be the norm in traditional huntergatherer cultures) in one serving.  The DuPlessis paper that discussed WHO guidelines mentions meat intake specifically citing this paper.   This was an interventional study on healthy 8 month olds (normal term) that were being partially breastfed.  The low meat group was 10 g/day, the high meat group was 27 g/day.  The quantities in Bubba Yum Yum far, FAR, exceed these levels!

I note that when the child finally gets some "real carb" in the form of starch,  it comes in the form of -- not some mashed potato or taro but -- highly processed starch powder.  Have no fear, perhaps, because the little one won't likely get diabetes from 10-15 grams of starch.  /snarkasm 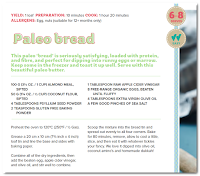 Oh yes, and our kidlet is developing a great palate with paleo bread dipped in coconut aminos!  Said kidlet might get a carb or two here too, but not many!

Remaining recipes in the sample I have acquired are:

So there you have it.  Chef Pete Evans wants to starve your baby.  Too much?  Maybe ;-)