The BabyGate Files: Chris Kresser. Is There Any Moral Code?

My last post discussed one of the recipes for homemade baby formula on the Weston A. Price Foundation website.    Here is that formula: 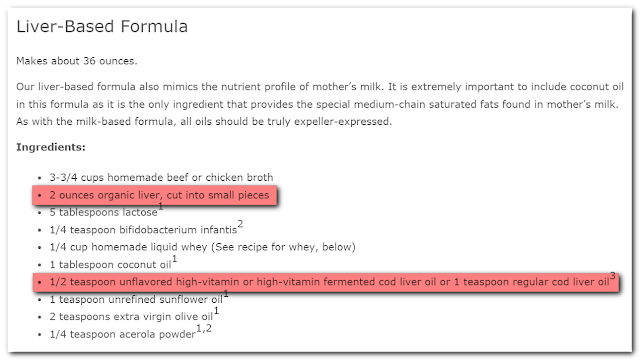 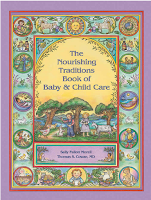 This formula has been around for quite some time and is also published in (at least) two Nourishing Traditions books including one specifically geared to baby care.

It is important to stress that, while the preference is given to the milk-based formulas (cow or goat), there is basically nothing in the way of any caution in using the liver-based formula.  Indeed as can be seen in the screenshot above,


This is clearly not true as can be seen on the table below.

On this background, I'm going to push the Vitamin A issue at least one more post down the line to address what jumped out to Jane Karlsson in my last post:  Look at that iron content!

As it turns out, a rather big name in the Incestral Health Community also noticed this, several years back.  Yet, he has pretty much done nothing about it.   I'm speaking of Chris Kresser.   In 2011 Kresser, apparently deciding to capitalize on his wife having a baby, released his (not recommended if you have anything else you'd like to spend ~$200 on, and I do mean just about anything else)  Healthy Baby Code program.  It's all a code you know ...

In 2012 when the Hartwigs of Whole9 got pregnant, they of course jumped on board as affiliates, and did a Q&A with Chris on their blog.

I can confirm that his "discussion" in HBC pretty much consists of the above recommendation of the WAPF formulas, and that this caution is part of the HBC as well.   There's nothing else really said about formulas, so you don't need the program ;-)

But this is no mere offhand linking to WAPF by Kresser.  He has a pretty long history of linking to WAPF materials (just for example, see here in 2007), and has spoken at two Wise Traditions conferences: 2012 on his Paleo Code, and 2014 on the Acid/Alkaline Myth.  In other words, Kresser is not some disgruntled malcontent like I imagine they probably think yours truly to be.  What does it say about the information provided on the WAPF website -- heck, just the page on infant formulas and feeding -- when one item on the page deems a cautionary "I don't recommend"?   Should we trust Mary Enig's formulary skills when she badly flubbed one of the three recipes?   Further, what does it say about Kresser that his only issue is with the iron content ...   An old issue you say?  Well, the Bubba Yum Yum formula is still high in iron, surely Kresser has caught wind of the new controversy?  This should provide reason anew for Chris to speak out if he needs one.  But no ...

Here is something even more disturbing about the iron content of the WAPF Liver-Based formula.    From the WAPF Formula FAQ:

Now justify the iron content of the of the liver-based formula.  You can't.   Clearly WAPF knows liver contains iron, so what is a breastmilk replacement doing with it to produce such high iron levels?!

If he genuinely believes that iron is an issue (and I agree), why is he not, as an "insider", doing ANYTHING to remedy the bad advice?    The disclaimer/caution is not enough because:
It's for the babies, right?  Presumably ALL babies.  At least the babies whose mothers find their way via "nourishing" blogs and such to the WAPF formula page.  No??

Now, just in case anyone reading this is thinking "how do you know he didn't try to do something", I'll say this.  Obviously I don't.  But, if he did, and they did nothing corrective (or to defend their formula) in response,  then he's a hypocrit presenting at their Wise Traditions conferences, or linking to their formulas at all.   Just linking with some lame disclaimer is not acting with complete responsibility.  What is the bad formula doing on an "authoritative" resource AT ALL????   That doesn't fly with me, and it shouldn't fly with a single woman looking to Chris Kresser for some extensively researched, science based advice on conceiving, gestating and nourishing a healthy baby.   Not even close.  Fail.

It bears mentioning that there's nothing really proprietary about a recipe for breastmilk substitute -- "nature" dictates that recipe.  I mean I've seen numerous recipes for the same low carb breads, homemade mayonnaises, and other things that are very similar and nobody thinks to bother to cite some "original source".  Point being, there's nothing really magical or even particularly exact about Enig's concoctions.  The milk-based ones aren't bad, but one could even do better in augmenting either cow's or goat's milk.  Therefore, why didn't Kresser simply produce his own formulas in his program?

Lastly, Kresser also positions himself as a defender of the need for carbs, or at least for including them.   This is quite lacking in his HBC program (though it's not super low carb), but this is 2015, and the Bubba Yum Yum appropriation of WAPF formulas is afoot!  He discusses the macronutrient composition of breast milk as a pillar of his dietary recommendations for all in the HBC program. Where's his outrage at Australian paleo going VLC with the babies? .... crickets ...

Why You So Mad?

This whole issue has really struck a nerve with me for various reasons.   It's the babies!  This community recognizes how this can have lifelong implications, and yet experimenting with their preferred ideologies seems to be OK by them.  This is done so under the guise of going back to the traditional way of doing things, so trusting women are thinking they are harkening back to time honored -- hence time tested -- practices.  But it turns out that a lot of it isn't true.  It's still nutritious though, right?  Does anyone really know??
I'm not sure how much of my frustration is coming through in my writing, but some of it is due to discovering that the Healthy Baby Code is basically a rip-off of the Perfect Health Diet.  While I'm not going to carry water for Paul Jaminet here, it's pretty bad when you co-opt the erroneous rationales of someone else -- similarly enumerated, but presented in summary fluff fashion -- in designing a diet for women wishing to conceive and subsequently support their pregnancy and lactation.   It's quite amazing what he did there, and I'll blog on it separately from the BabyGates if and when time and motivation permit.    But you know me, I'm not going to say something like this if I don't have the evidence to support the accusation.

I'm also knee deep in turn of the last century literature -- some of it widely misquoted in the IHC -- and what Weston A. Price actually wrote about the diets of traditional cultures.  Suffice it to say that these "nourishing" folks almost make Gary Taubes appear to be a comprehensive, unbiased researcher instead of the blatant cherry picker that he is!   It's bad enough to promote diets to adults that are based on complete misrepresentations of traditional cultures.    It's unseemly to target those adults who are especially vulnerable.  It's unconscionable to target the babies.  Because there can be harm done.  Please stop.