Showing posts from October, 2014
Show all

Thermodenyics in the Incestral Health Community: It Began with Atkins 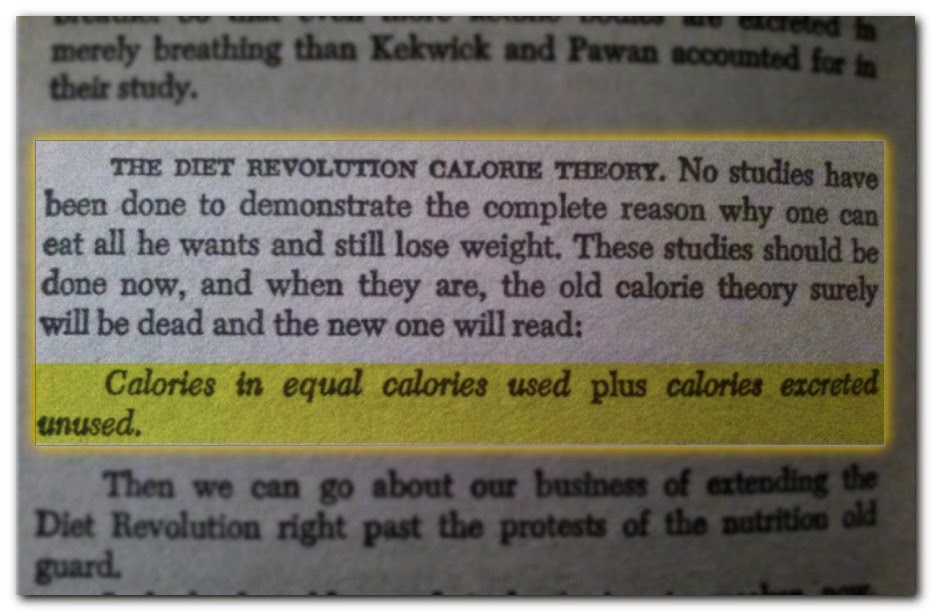 For the past couple of months, I've been somewhat obsessing about thermodynamics having written the AARR piece and a few blog posts, not to mention revisiting several dating back to near the beginnings of this blog.  I began this a while ago as a single lengthy post, but it's gotten out of hand and finding time to tidy up such a post vs. publishing shorter chunks in parts became impossible.  Not sure how many parts this will have.  This series will put several members of the IHC "on the record" so to speak.  While I've done so in the past, the hope is to have it all in one place. Robert Atkins the Calorie Guy!    Surely Atkins is an honorary member of the IHC, even though he passed away over a decade ago before this community reached the level that it has.  Most of the "greats" have learned something (perhaps essentially everything) they know about low carb diets and tangentially about thermodynamics/calorie theory from the "late great one
98 comments
Read more 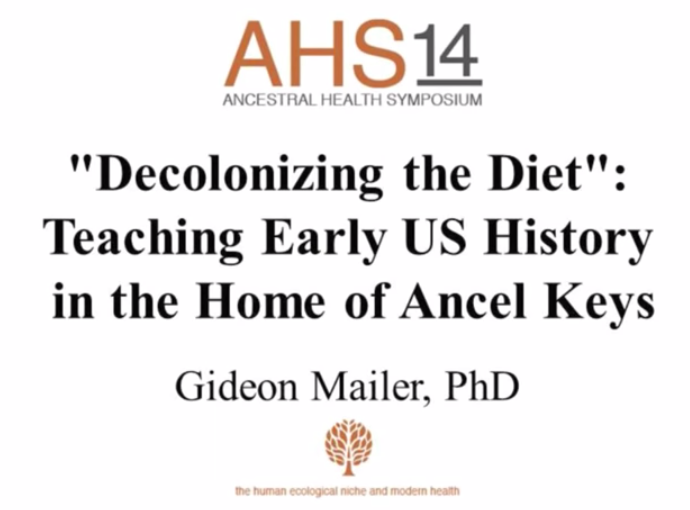 In Part I , I discussed the first three of four talks at the recent Ancestral Health Symposium that were actually devoted to -- or supposed to be in some fashion -- "ancestral diets".  The IHC has a long history of co-opting select aspects of such dietary practices to fit the current interpretation of the hunter-gatherer-inspired way.  If the deluge of cookbooks from all corners are any indication, there will be no letting up soon of the trend to cauliflow paleoize all "inferior" but nonetheless delicious and often cultural staple foods.   But now, in a most bizarre twist, we've reached the point where imposing "paleofied" versions of ancestral diets on  these very peoples went off without a hitch, or seemingly any notice of the supreme irony of it all. This assault on ancient humanity was culminated in a presentation by Gideon Mailer, PhD.  I took a screenshot of his title slide for visual impact here.  So that you won't need to clienlarge
120 comments
Read more 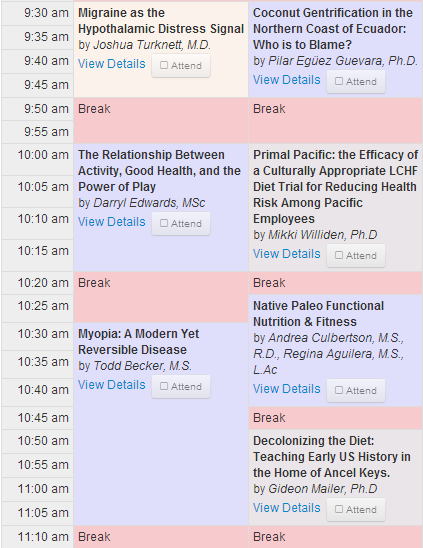 This post has been a long time in coming.  Bits and pieces have been in the draft since long before the Ancestral Health Symposium this past August even took place.  The abstracts and bios had been online for quite some time prior, so I had a pretty good idea of what was to transpire.  Indeed, I had intended to blog on this before AHS14 just to "compare notes" after all was said and done and had done quite a bit of research. For an organization and event containing the words "ancestral health", the program in general seemed lacking in relevant material.  Paleo was a less often heard term this year, yet it was sadly not replaced by discussions of more recent and/or definable ancestral diets.  You know ... those that promoted health up until, in many cases, the 20th century and beyond?   The nods to discussion of the lifestyles of ancestral cultures were clustered together on Day Two of the symposium, all of the shorter 20 minute variety, there along the ri
58 comments
Read more

- October 14, 2014
Note:  Some of the graphics I'm going to use in this post aren't great, but I don't think I need make much comment as to the changing picture of the so-called Perfect Health Diet.   Paul Jaminet has called his diet the most scientifically sound version of the paleo diet (small caps).  In his tribute to Seth Roberts , Paul wrote: The weaknesses of Seth’s approach to science show up best, I think, in how he ate. Although he considered ours the “sanest” diet book, he didn’t eat our diet. He prized his own experimental results above all else. If an experiment persuaded him that eating something would improve his health, he ate it. To my mind, this led him on a somewhat fanciful peregrination through dietary parameter space. His approach risked two pitfalls: ... ...  most modern health problems take 60 years to develop. So there was no way for Seth to directly appraise whether his diet would generate good health or poor health; ... It is because of these
308 comments
Read more

The Second Law of Thermodynamics in Humans: For Heat's Sake!

On the urgings of a few commenters here on the blog, and even more recently , by Don't-Call-Him-John (Kiefer), I've found myself reading Biological Thermodynamics by Donald Haynie (2nd edition).  [It's #1 on this  Amazon Search  page, just for context that there are others out there.] After reading large chunks of the book -- had a lot of time on my hands without internet access these past couple of weeks -- it has become even more clear as to where some of the biggest misconceptions about thermodynamics in this community come from.  It is not that Haynie is incorrect, however.  There are many statements in the book that read as "off", but on second or third pass through are technically accurate provided one is using his definitions in proper context*.  It is more that his book is so filled with examples that lack relevance to biological contexts as to cloud the picture.  What results is that although somewhere in the text all the relevant "prerequisit
34 comments
Read more

Edited and Updated post recording ;-) Do Calories Count with CarbSane   ( direct video link ) Well, we didn't get to chat as much about calories per se as I'd thought, but it was a nice discussion nonetheless, I believe.   Sam is a good sport even though he knows I've been critical of his calorie experiments and even encouraged folks to come check out these posts:   That 5000 Calorie Jokesperiment and Low Carb Circus Acts , for example.    In some ways I'm frustrated a bit because Sam's schtick is objectively of the calories don't count variety.  Further, his first experiment was specifically about not gaining weight overeating a low carb diet, so there's a bit of evasive maneuvering going on IMO.  However he is not alone in this -- Exhibit A being Jonathan Bailor -- in dialing it back when discussing it with a critic.  So of course calories count, and I'm not sure how well I articulated it (note to self:  don't schedule mornin
42 comments
Read more

- October 07, 2014
I'm way behind the ball with this announcement, as the airing of the podcast came at a bad time with my current family member situation. I was on  Kill The Guru (Lucky) Episode 13 .   We taped in late August and was "aired" last week.  Hope you enjoy! The entire interview ended up being something like 150 minutes though we had a couple of interruptions.  Still, way too long for a usual podcast so there are some big chunks that were left on the cutting room floor.  As it is the podcast is around 80 min long!  We talked carbs/insulin/Taubes, ancestral diets, low carb rebound, sugar addiction, etc.  I've made a lot of friends in the UK training realm over the past year or so and the carbophobia is quite a bit more extensive there than here in the US (as we discuss). James Kahan has been gracious enough to provide me with the uncut stuff with permission to share at will.  So I will likely do so as "out takes" as time goes by on my YouTube channel.
13 comments
Read more
More posts