Showing posts from July, 2013
Show all

- July 31, 2013
I'd like to respond to this e-mail and clarify your understanding of the science, but I'd like to do it privately to you. If you promise that's the case, then I will respond. If you then argue persuasively that there is a good reason why your readers would benefit from reading my e-mail, I will agree but I reserve the right to decide what's persuasive or not and what's a good reason. Memories ....
9 comments
Read more

I probably won't be around much longer. You see Con Ed (my electricity provider) contacted me and said that because my usage this past year exceeded what my level payments cover, they will need to recalculate that payment.   Which got me thinking CON Edison.  Hmmmmm sounds conspiratorial.  So I investigated. Well, they are pushing all manner of energy saving schemes!  How can I cut my bill?  And then I look at my bill.  My home intakes kilowatt•hours (kwh) ... but how can I know what to do to reduce that intake when I use:
102 comments
Read more

I am very pleased to introduce my readers to a new product from the folks at Examine.com, their Supplement Goals Reference Guide .   Yes, this is something new for me.  I am actually promoting something here, and before you think I've gone off and gone into the supplement business, please read on! You see, the folks at Examine.com have spent the past two plus years amassing an impressive data base of supplements, how they work, if  they work, and the peer-review studies on their utility.  All presented in an unbiased fashion because they don't sell supplements!
22 comments
Read more

Did low fat diets cause the obesity epidemic in the US?

click to enlarge The title of this post is a common theme repeated by the likes of Swedish diet doctor Andreas Eenfeldt - That somehow going low fat (thus high carb) has caused the obesity epidemic.  At best, by percentage only, the USofA has decreased fat consumption from 37% to 33% (or 36% to 33% for women) ... this 3-4% reduction in fat percentage has been accompanied by a 7% increase in carbs (42-to-49% men, 45-to-52% women).  As you can see in the graphs, absolute fat content is basically flatlined -- we didn't cut fat, women (who tended to "comply" on the fat recs moreso than men)  even added a small amount.  Any way you cut it, this relatively insignificant change would be insufficient to cause some sort of carb triggered, insulin-induced fat cell mutiny!  Confronted with such facts the insulin hypothesis, or what I call TWICHOO, is changed ever so slightly to focus on how carbs cause you to eat more -- to the tune of some 300-500 calories/day and gain weight
70 comments
Read more

- July 18, 2013
Part II of my CarbSane is so cruel and vitriolic in her criticisms of Mark Sisson bumpfest today.   Crying Wolf II , Bump I This one is especially  ironic given point 9-of-12 of Mark's email to Grashow blamed lack of dietary discipline and sloth for my weight.   Here he says that doesn't work anyway!  {shakes head} Be sure to notice how I misquoted, misrepresented and ridiculed Mark Sisson, took pot shots at his appearance and denigrated him on a personal level.  Oh wait.  That didn't happen.  This post was originally viewed by around 400 people and didn't even crack the Top10 list at the time.
33 comments
Read more

July 18, 2013 Over the Hump Bump: What's with all the supplements, and Primal hypocrisy 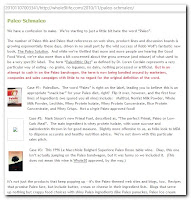 Since I totally forgot to do a post bump last week, I'll have a two-fer for you today of examples of the few posts I've done concerning Mark Sisson here at the Asylum.  I did so few, and tried so hard to build my readership by trashing him that I even had to update the labels on this post to include the man's name.  Yet I thought I'd use these bumps to shed some light on Mark Sisson's career as a disappearing artist of sorts -- making criticisms disappear.  This is an opportunity to address Point 8-of-12 of Mark's email to Charles Grashow as pertains me.   8.         I find it more than ironic that a person who would continuously try to take me down, criticize my business, question my ethics and motives and generally use my site and my products as fodder to build her own traffic would then beg me to disassociate with and publicly denounce others to whom she does the exact same thing. On that principle alone I wouldn’t  be seen supporting her (Ev) in any way
13 comments
Read more

Crying Wolf In a 12 point email* to Charles Grashow, dated April 1, 2013, Mark Sisson wrote: Why discuss this now? Oh ... it probably should have been dealt with months ago, but somehow I expected this would have settled down by now and this wouldn't need to be aired.  You see, Robb Wolf got mad at me for asking what the paleo diet that the Reno First Responders were counseled to consume actually entails. Or near as I can figure that's what first got under his skin. Either that or the fact that he couldn't then, and still can't now, take a solid position on carbohydrates in the paleo diet. Either way, he felt the need to lie on his website, in this comment :
48 comments
Read more

image link It has recently been discovered that antibodies to Substance X are associated with neXt Syndrome and over the past 6 months you have discovered that you have been exhibiting 8 of the 10 symptoms of XS as described in some online medical article you read.   So you go to the doctor and describe your symptoms.
20 comments
Read more

- July 12, 2013
... ain't got nothing on Addict and Uncaring. I think this is what has really poisoned the discourse when it comes to carbs and food quality vs. calories.  The "alternate hypothesis" camp banks heavily on the visceral response and religious/judgmental tone of the terms gluttony and sloth to anger their base.
22 comments
Read more

What Paleo™ can learn from Paula Deen. If it's not too late already.

- July 09, 2013
In case you haven't heard, Paula Deen's career has imploded, exploded and all but vaporized in the past few weeks.  Gone from Food Network.  No more Smithfields or diabetes drug endorsements.  Gone are the product lines and Ceasar's Deen themed restaurants.  All for why?  Well, it turns out that Deen and her brother were being sued for sexual harassment and a racially charged atmosphere in the restaurant they co-own.  Deen was deposed and asked a simple question:   Have you ever used the N-word.  "Yes, of course," Deen replied, though she added: "It's been a very long time." Asked to give an example, Deen recalled the time she worked as a bank teller in southwest Georgia in the 1980s and was held at gunpoint by a robber. The gunman was a black man, Deen told the attorney, and she thought she used the slur when talking about him after the holdup. "Probably in telling my husband," she said. Deen said she may have also used the sl
87 comments
Read more

{shhhhhhhhh .... don't tell Gary Taubes, this might just upset his 21DaySugarDetox approved green apple cart!} You know how the story goes by now, right? In more recent lectures, Taubes is fond of using the slide below. source These are two quotes that Taubes cites from Lehninger's Principles of Biochemistry and he juxtaposes them to convince you how misguided such textbooks are.  How can, on the one hand fat cells "fatten" according to the action of insulin, but human beings get fat due to positive energy balance?   The simple answer is that insulin is not some renegade hormone and your pancreas is not a master organ in the body placating your rebellious adipocyte's every whim. Yes, tis true that insulin has a stimulatory role in the storage of fatty acids by acting on LPL on the intake side, and yes, tis true that insulin "traps" those fatty acids in the adipocytes by suppressing HSL mediated lipolysis and release of same.  Sounds like a sl
40 comments
Read more

July 4, 2013 Over the Hump Bump: Where does insulin resistance start? The adipose tissue

The readership in this blog continues to grow and it is not lost on me that a vast majority of current readers are unfamiliar with the bulk of my work here on this blog.  I think I'm closing in on 1000 posts which would make me one of the more prolific bloggers around ... for better or worse!  As such, I more than understand that it would be darned near impossible to catch up, etc.  So a few comments in that vein.
10 comments
Read more 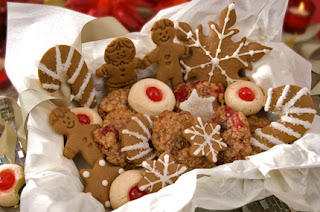 As many of my readers are likely aware, I have attracted the attention of a few true bullies and stalkers who consider it noble to ridicule my every word and move.  In line with this, they have picked apart my interview with Jimmy Moore and made fun of various parts.  Two of the issues both happened to involve cookies, hence the title of this post. My (long, long ago and one time) Cookie Diet: The purpose of my interview with Moore was ostensibly to discuss my issues with the science of Gary Taubes.  It wasn't to discuss my own life, weight, history, etc.  However this was around the time of the Twinkie diet so I guess Jimmy felt compelled to waste time (less for the real issues) discussing that.  In that context, I related a story from long ago .  I don't remember exactly what year that was, but as I recall what apartment I baked in I would have been under 25.  My weight struggles were continuing at that time having began with a crash diet in my late teens and progr
55 comments
Read more