Showing posts from April, 2015
Show all

#LCHFollies ~ Is there a place for beer, wine, spirits in the Banting lifestyle? 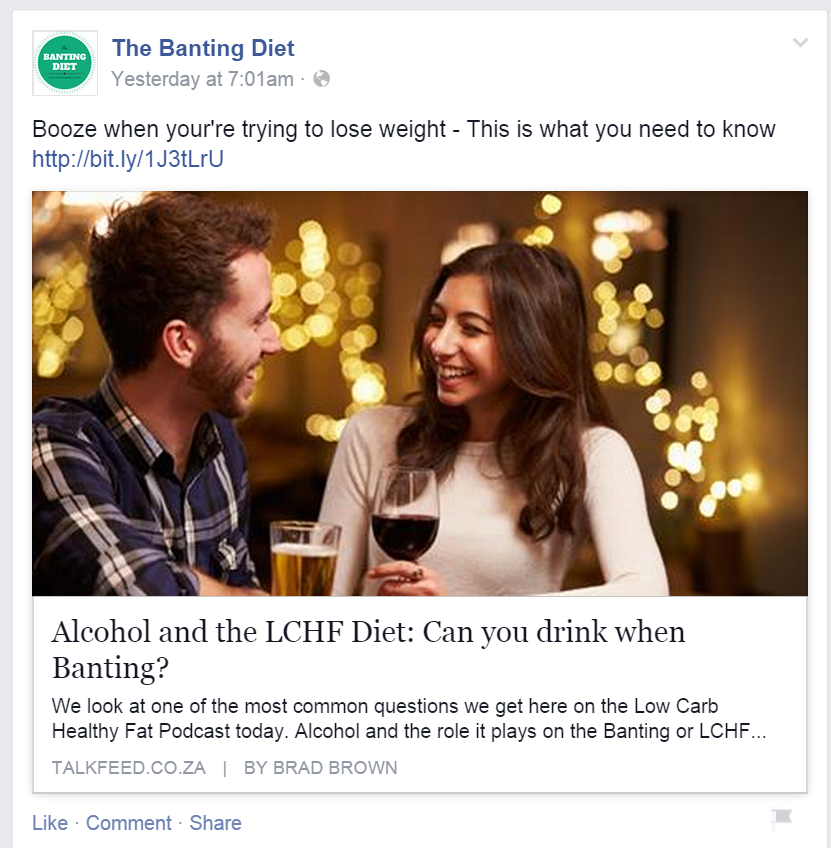 You're kidding, right? What?  This is a serious question?  Why yes it is! I've got some things to say -- hopefully in the next week or so -- about Tim Noakes running afoul of the Health Professions Council in his country for advocating a woman wean her child onto a LCHF diet.  But I had a Twitter exchange of my own the past couple of days, in which I basically encouraged folks to hijack the  # WeSupportTimNoakes hashtag.  This is being started to, well, support Noakes against his percieved persecution.  Said Twitter exchange took me to a podcast page with a sidebar image showing the Facebook post screenshot below, and leading me to this podcast:   Alcohol and the LCHF Diet: Can you drink when Banting? For Real?? No ... not the Onion website!   [it's a mighty good thing I didn't have an adult beverage in hand when I came across this!]
64 comments
Read more

Part I Metabolic and physiologic effects from consuming a hunter-gatherer (Paleolithic)-type diet in type 2 diabetes U Masharani, P Sherchan, M Schloetter, S Stratford, A Xiao, A Sebastian, M Nolte Kennedy and L Frassetto {Apologies in advance:  No idea if this is truly as scattered as I think it might be, but I'm currently working on a number of projects, including "real job" stuff.  So rather than hold this up for perfecting, I'm hitting the publish button!} The Take-Aways, Such as they are ... In this three week trial, researchers used food questionnaires to assess usual intake prior to the study.   ... on the basis of our intake questionnaire and food recall responses, we expected the parameters of the subjects on the ADA recommended diet to remain unchanged from baseline, but in fact they also improved reducing the differences observed with the two diets. I'm going to go out on a limb and suggest that the baseline reporting was, as has b
3 comments
Read more Random Bump: There has been some discussion of diagnosing diabetes type going on in my comments of late and I thought this might be a good post to bump in response.  It's pretty specific, but contains links to some background blogging. I think it would be safe to say that I'm of the belief -- and the scientific evidence seems overwhelming in support -- that peripheral insulin resistance is either non-existent or plays a minor role in T2 diabetes.   Nonetheless, the concept of IR remains, but for the most part is diagnosed using a fasting HOMA-IR score based on fasting insulin and glucose levels.  This is considered a measure of hepatic IR, but even here appears to be a flawed measure.    The "swamped insulin receptor" model is flawed.  Not saying it doesn't perhaps play a role, but glucose uptake is not the first defect nor the main determinant of elevated circulating glucose.   The WHO even classified Type 2 Diabetes as such (1999): 7.2 Type 2
15 comments
Read more

- April 17, 2015
New Study!!! Metabolic and physiologic effects from consuming a hunter-gatherer (Paleolithic)-type diet in type 2 diabetes U Masharani, P Sherchan, M Schloetter, S Stratford, A Xiao, A Sebastian, M Nolte Kennedy and L Frassetto Why Frassetto Paleo? The first thing I do when I see a new paleo diet study is try to find out WHAT the diet actually was.  So even before I got the full text, I saw the "group" author and the description of the ramped up diets and knew it was her brand of paleo.  Here's a summary from  this post , which has links to individual posts I've done on the other various studies.
16 comments
Read more 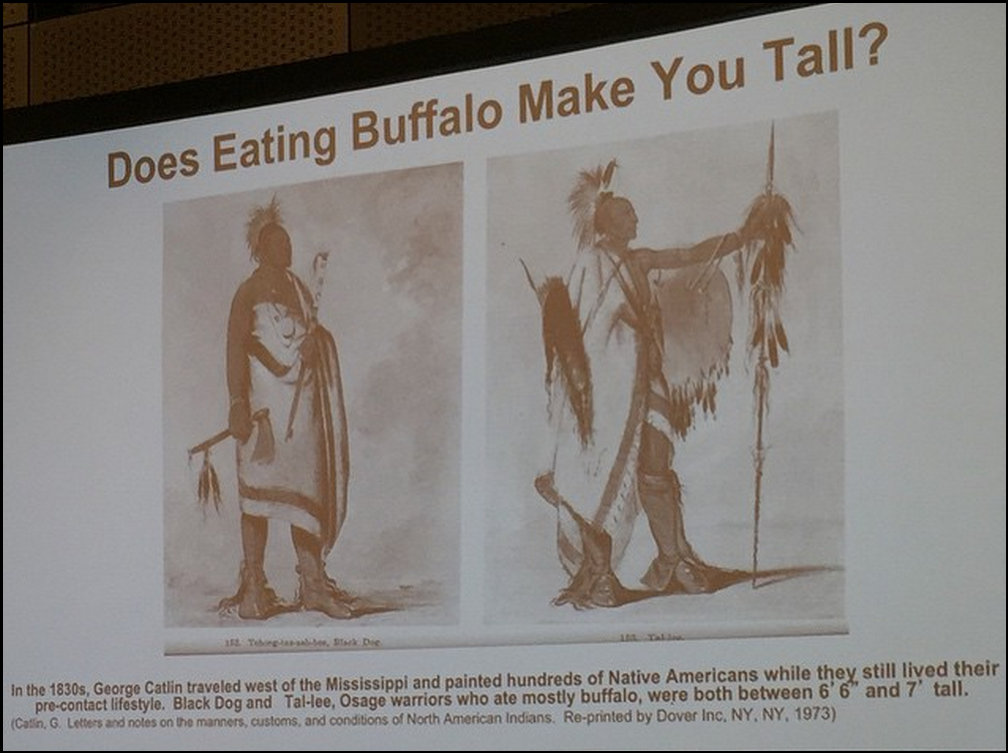 Howdy all!  This one's been languishing in the draft bin for a bit as I hadn't had the time to round out the continuing saga of buffalo hunters.  It certainly belongs in the "I don't call it the Incestral Health Community for nothing" file!  As I was publishing up the Buffalo Roaming post the other day, "news" came across Jimmy Moore's Instagram feed that Stephen Phinney was unloading some ancestral dishonesty on the attendees of the CONvention of the American Society of Bariatric Physicians (or was it the Nutrition and Metabolism half of the event, who cares, same general schtick, over and over).  I include a screenshot of the slide here to confirm that this is the same slide I'd seen Phinney use before as you'll see here in a bit.  Essentially, this appears to be the same talk, different CONference.
26 comments
Read more

Where the Buffalo Roam ... 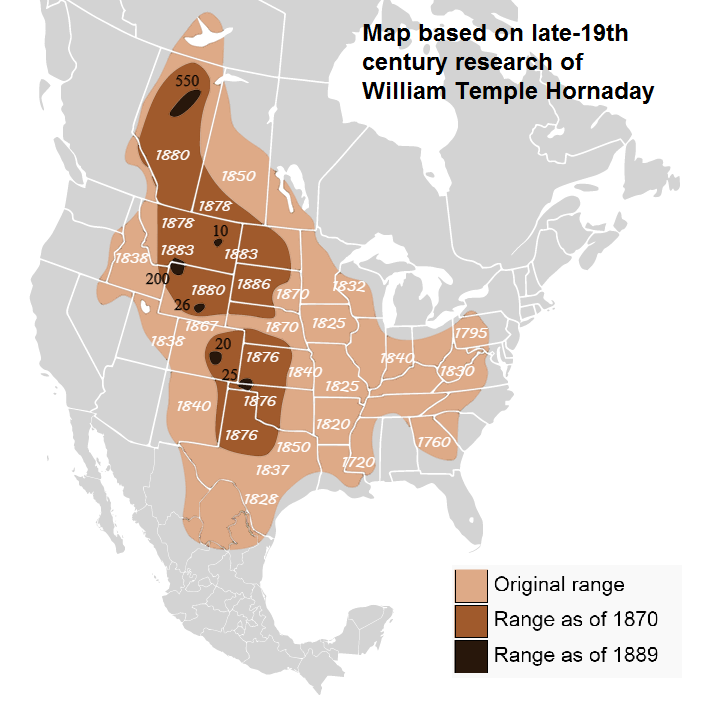 Nutritional Ketosis is an Oxymoron

- April 08, 2015
This is going to be a rather short post, and I'm not going to reference it.  I simply don't have time.  (As always, feel free to contest any claims you feel are erroneous in the comments.)  But something has been bothering me for a long time about the whole nutritional ketosis thing, or what I call NuttyK, and I just couldn't put my finger on it.   And then it hit me, as I was looking into the buffalo hunting thing ... Humans likely  do  have a long history of being in ketosis for periods of time.  Ketosis ... as in the metabolic adaptation to starvation to preserve lean mass and reduce glucose consumption by the brain by providing a fat-derived alternative fuel.  These humans were in prolonged periods of caloric deficit without a "need" to be ... in other words they weren't overweight dieters getting most of their energy from surplus stores.  They were in  starvation ketosis .
34 comments
Read more

Did Nina Teicholz Research and Write The Big Fat Surprise? 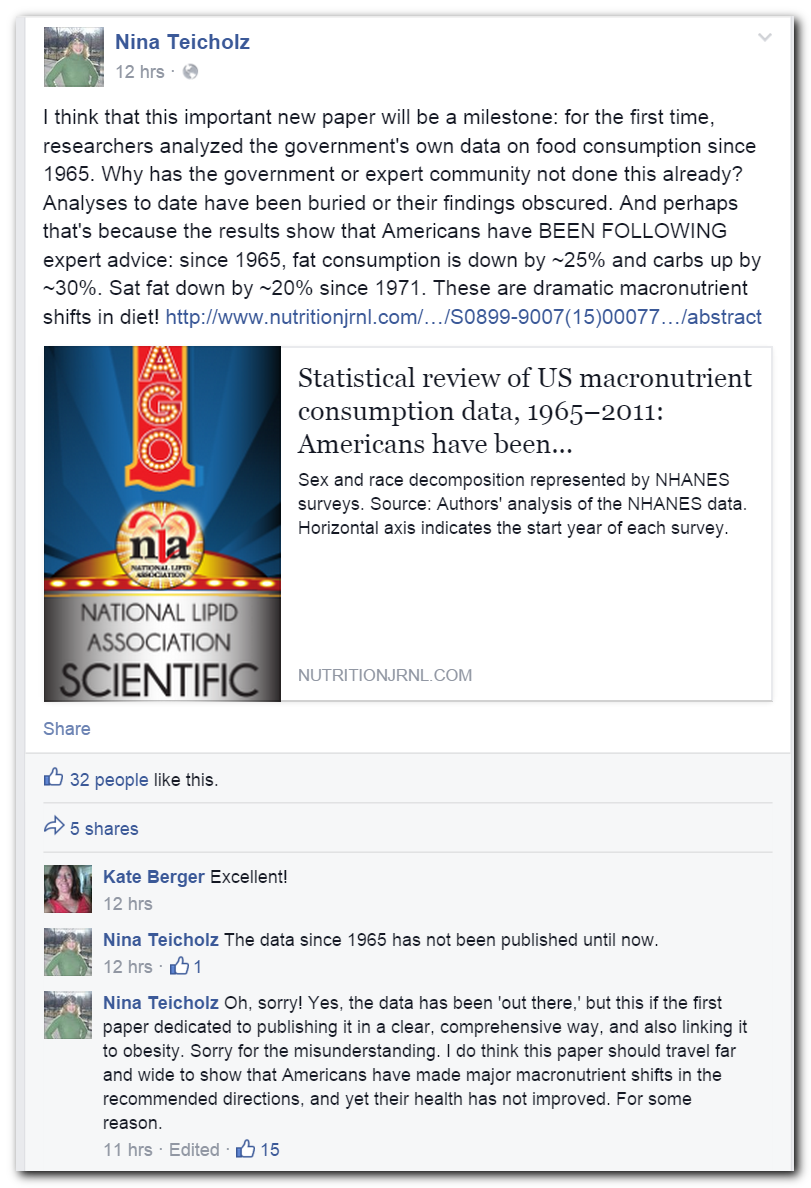 For some reason, Nina Teicholz is on a social media publicity blitz for an article I refer to as Hite & Economists.
53 comments
Read more Another timely bump.  Note that this is almost one year after original publication.  In response mostly to this post, Jimmy wrote:   Who Knew Eating Butter Would Be So Controversial?    Seriously?  There's a difference between eating a pat of butter here and there, and putting a half pound on a plate with some eggs and calling that a meal.   A few weeks ago, I attended the annual Paleof(x) conference in Austin, Texas and it was such a fantastic experience for everyone in the Paleo, primal, low-carb, real food community. Getting to meet so many people who shared their stories about how the work I am doing is changing their lives is incredibly gratifying and makes me appreciate the unique opportunities that this platform affords me. And while it was a positive experience attending this amazing event, the fact is it was also pretty stressful. It’s happy stress, but stress nonetheless. Plus, as you’ve know I’ve been hunkered down banging out my book on ketogenic diets which entai
430 comments
Read more

Note:  This post is rough.  It grew out of another post because I know I've addressed some of these issues before but can't really find a post to link to.  So I made this and will add, tweak, etc. as need or desire arises.
1 comment
Read more
More posts