In this post I want to discuss two companion studies from the late 80's looking at twenty-four hour profiles of insulin secretion, uptake by the liver, glucose levels, etc.  The studies are available at the links below:


Participants:  All non-diabetic with no family history of diabetes.  Age, weight, BMI are group averages.

Hyperinsulinemia is a common finding in obesity. This abnormality could result from an increase in insulin secretion, a decrease in insulin clearance, particularly hepatic insulin extraction, or a combination of these two factors.  The literature is divided on which mechanism is predominant.

This group used novel (at the time) methods to measure both insulin secretion rates and clearance rates (uptake by the liver) to elucidate the mechanism of hyperinsulinemia associated with obesity.  Below are plots of BMI v. Insulin:

The mixed diet is described below in Study II.  The variability in basal and 24 hour insulin secretion and rates was far greater in the obese vs. normal as can be seen in the individual value plots at right.  (Left to right: basal insulin conc., basal secretion rate, average 24 hr insulin conc., average 24 hr secretion rate)
Next they looked at insulin uptake/clearance by the liver.  Comparing the insulin extraction averages between the normal and obese groups:

Looking to see if fasting insulin levels correlated with basal insulin extraction, they found no correlation in normal subjects however there was:

The subjects with elevated insulin values had significantly lower hepatic insulin extraction than the subjects with normal basal insulin concentrations (61±3 vs. 45±6%, P < 0.05).

The last part of the study, at the end of the 24 hour period, involved glucose intravenously infused to abruptly put all subjects into a hyperglycemic state (300 mg/dL).  Glucose infusion was varied to maintain hyperglycemia for 3 hours and insulin was measured.  Again the obese had greater total insulin levels.

However, the insulin secretion rates were similar between obese and normal, while in both groups the insulin levels continued to climb during the 3 hour test.  The levels climbed more significantly in obese vs. normal reflected in the numbers above.  Thus these increased levels in the face of similar secretion rates indicate a reduced clearance of insulin in obese vs. normal subjects.  From the discussion:

These data therefore suggest that, under normal circumstances, insulin secretion is the major determinant of the basal insulin concentration. In obesity however, reduced hepatic insulin extraction may play a contributory role in subjects with more marked hyperinsulinemia. A recent study (21) documented a reduction in the metabolic clearance rate of insulin with increasing body mass index and also concluded that reduced clearance may contribute to the hyperinsulinemia of obesity.

...In summary, therefore, the availability of quantitative estimates of insulin secretion has allowed several important conclusions to be drawn concerning insulin secretion and clearance kinetics in normal and obese subjects. These are:

(a) Insulin secretion is increased in obesity and is the most imporant factor in the pathogenesis of the hyperinsulinemia observed in that condition.

(b) Although group means for insulin metabolic clearance rate and hepatic insulin extraction are not significantly different in normal and obese subjects, diminished insulin clearance may be a contributory factor in subjects with more marked hyperinsulinemia.

(c) In response to a hyperglycemic glucose infusion a reduction in insulin clearance occurs in normal and obese subjects.


This study looked at the insulin secretion over a 24 hour period in normal (and obese people eating a "normal" diet.  The diets were 50% carb/35% fat/15% protein at weight maintaining levels (30 cal/kg).  All subjects were fasted overnight (10 hrs) and then ate 3 meals on the study day at 9am, 1pm and 6pm.   Breakfast was 20% of total calories, and lunch and dinner were each 40%.  Samples were drawn at 15-50 min intervals.  A compilation of the main results is shown below: 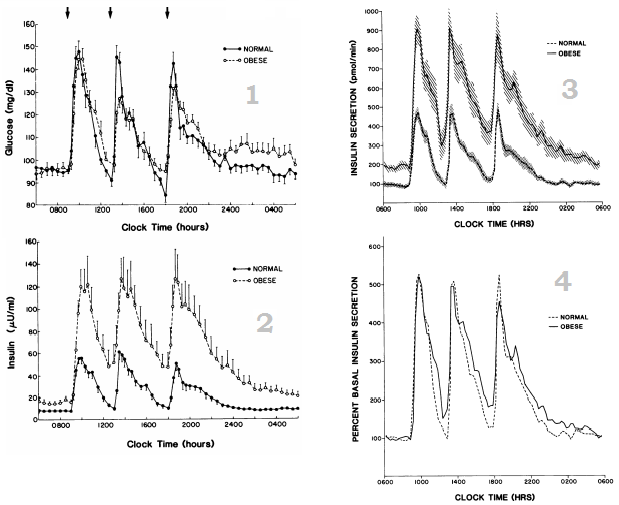 1:  Average glucose levels over 24 hr period
2:  Average insulin levels over 24 hr period.  Vertical bars are standard error.
3:  Insulin secretion rates over 24 hr period.  The shading indicates the individual responses.
4:  Insulin secretion as a percentage of basal insulin secretion determined for each individual subject
Some thoughts on both studies:
While these studies cannot establish the causal relationship between hyperinsulinemia -- basal and/or postprandial -- and obesity, they offer a few clues that are open to interpretation.
Both basal insulin levels and secretion rates are quite tightly clustered for the normal weight group with BMI's ranging from what appears to be about 18-to-25.  The scatter is much more pronounced across the range of obese subjects (BMI 29-to-55).  The six obese below the line, presumably the normal fasting insulin group but I can't be sure, range considerably in BMI, from 29-to-41.  Looking at the range of 24 hr insulin levels at around BMI 30, and again at around BMI 40, we see a two-fold or greater range of individual levels.
Here we have 6 "black swans" who accumulated a lot of fat despite both normal fasting insulin levels and 24 hour insulin "exposure" within the range of normal weight subjects.   If I'm understanding TWICHOO correctly, it is individual susceptibility to carbs -- e.g. variability in how big an insulin spike they cause -- that supposedly explains why some don't get fat on high carb while others do.  Those prone to obesity secrete more insulin that partitions the fat to the fat cells while the rest of them starves.  And yet in these studies several obese subjects had neither chronically elevated insulin trapping their fat in their fat cells, nor a total 24 hour exposure to the same fat-trapping hormone supposedly running the show.  How did they get fat then?  How do they stay fat with insulin levels returning to normal overnight?

Clearly the already obese have exaggerated insulin responses, but in these non-diabetic the response is in proportion to basal levels similar to normal individuals.  Thus, as non-diabetics, the obese subjects in this study were all "compensators" -- in other words, as I've said previously, they're as hyperinsulinemic as they need to be to overcome some degree of insulin resistance.  Looking at 24 hour plots from Study I (1 & 2), clearly the obese have higher insulin, but their blood glucose response is virtually indistinguishable from the normal group (though BG levels are slightly elevated overnight).  Their basal insulin is elevated to downregulate   NEFA release from the larger fat stores so as to maintain normal levels (though I suspect they are more elevated in the 9 obese with elevated fasting insulin who are exhibiting adipose tissue IR).

Since all subjects were fed on a 30 cal/kg "formula", despite the obese tending to have a lower percentage of lean mass, it is likely the obese were "overfed" (particularly the two with BMI's of around 50 & 55), albeit for one day, in this study.  This might explain why their BG and insulin levels didn't come back to baseline even into the following day.  This residual effect demonstrates how overeating and existing obesity can cumulatively contribute to fasting parameters.  Perhaps the BG levels remained elevated longer in the more IR obese, leading to decreased hepatic extraction/clearance of insulin.

The way I interpret the results here, they do not support TWICHOO because the predisposition towards hyperinsulinemia must be there either in a heightened sensitivity, or that refined carbs elicit a higher insulin response (here's where Taubes runs into trouble with his new sugar kick).  And yet 6 of 15 obese subjects in this study would not have exhibited postprandial (pp) hyperinsulinemia (since the pp responses were proportionally similar between normal and obese).  The disparity in the obese seems much better explained by  the degree of adipose tissue IR and the degree of downstream hepatic and/or skeletal muscle IR.  In otherwords, the Fatty Acid Hypothesis is consistent with not all obesity leading to hyperinsulinemia, but TWICHOO cannot explain (and no amount of complicating it will either) why some become obese without hyperinsulinemia.  Hyperinsulinemia it seems would be necessary for obesity if it's carbs and only carbs that drives insulin drives fat accumulation.

The second study discusses the pulsatile secretion of insulin which I have not addressed here.  Some might find that interesting, and perhaps I'll blog on that sometime.  I've got some other articles on that phenomenon around here somewhere ;-)
Posted by CarbSane at 1:06 PM