- September 25, 2011
In the previous post in this series, we met the C3KO mouse, a mouse that is ASP deficient.  In this post, I'm going to discuss what happens when you take a leptin-deficient ob/ob mouse and also make it a C3KO.  Humor me my fun with Star Wars characters ;-) 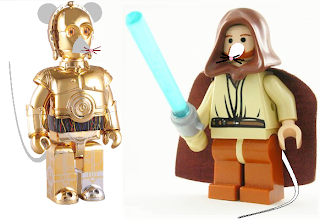 It turns out I had discovered this study and blogged on it over a year ago:  Acylation-stimulating Protein (ASP) Deficiency Induces Obesity Resistance and Increased Energy Expenditure in ob/ob Mice   (Xia, Sniderman & Cianflone).

The ob/ob mouse is "a mutant mouse that eats excessively and becomes profoundly obese. It is an animal model of type II diabetes. Identification of the gene mutated in ob led to the discovery of the hormone leptin, which is important in the control of appetite. ... ob/ob mice develop high blood sugar, despite an enlargement of the pancreatic islets and increased levels of insulin".  In this study, they took ob/ob's and also made them C3 knockouts (designated C3-/- or 2KO in the study, I'll call them C3KO-ob/ob to stay consistent with that designation in other studies.)    Basically, the C3KO-ob/ob is both leptin and ASP deficient, and they compared this mouse to regular ob/ob mice and wild-type (normal) mice.  The exact diet fed was not specified, but they make reference to standard chow which are generally low fat (10- 15%) and high carb (55-65%).

What happens?  Well, knocking out the ASP resulted in the obesity prone mice not becoming as obese despite eating even more than the regular ob/ob mice (5.5 vs. 4.7 vs. 2.6 g/day for C3KO-ob/ob v. ob/ob v. WT).  These mice almost doubled the intake of the wild-type mice, and yes, they became obese, but not as obese as those mice with ASP.  The effects of ASP were previously shown to differ with gender, so the researchers looked at male and female mice separately.  The weight changes are shown at right.  (Did someone forget to tare the scale on Week 15?)
So how did these C3KO's get to eat almost 10% more than their ob/ob buddies without gaining as much weight?  Well, by increasing their energy expenditure!

In the present study we demonstrate increases in food intake and basal metabolic rate in double knockout mice, without any changes in RQ (respiratory quotient).  The 9% increase in food intake is more than offset by a 28% increase in energy consumption (oxygen consumption) resulting in an overall decrease in body weight of 17% as compared with the ob/ob mice.

The authors address the first observation, that ASP deficiency led to increased intake and discuss the studies on whether ASP or C3a have a direct efffect.  These are inconsistent and effects are apparently short-lived so they conclude:  "Likely the effect of ASP deficiency on food intake is not a direct one."   They continue:

The second intriguing finding was the increase in basal metabolic rate (BMR) that was quite pronounced in the 2KO mice.  The increase in BMR cannot simply be a consequence of hyperphagia, since the ob/ob also overeat, but their BMR is substantially lower than normal. Similarly, the change in BMR cannot simply be due to a lack of leptin, since both mutant miceare lacking leptin. Thus the change in BMR must relate (directly or indirectly) to a lack of ASP ...

Substrate cycles have been proposed to be important not only in thermogenesis but also in maintaining the sensitivity and flexibility of metabolic regulation. ... Of particular interest to the present discussion is the triglyceride-fatty acid cycle, which is highly active in adipose tissue. In humans the activity of this cycle ranges enormously from 0 to 100% re-esterification of released fatty acids and is regulated through environmental (diet, exercise), anatomic (gender and adipose tissue site), and hormonal influences. A number of hormones, such as norepinephrine and insulin have been shown to modulate the triglyceride/fatty acid cycle in adipose tissue ...

I would be remiss if I didn't remind my readers here of what got this series of posts started.  In TWICHOO, Taubes looks at just the TAG/FA cycle as the ultimate determinant of adipose tissue accumulation, and he claims that it is insulin and only insulin that has an impact on this cycle.  There is no doubt that insulin is highly influential, and may well be the primary regulator of this cycle in the postabsorptive (fasted) state.  But what's this norepinephrine?  Diet and exercise?  Huh?  There appear to be other factors at play!!  But I digress ...
Back to the study and its implications.  One of the characteristics of the C3KO and other ASP deficient mice is delayed postprandial (after meal) clearance of triglycerides from plasma.  ASP plays an integral role in the uptake and esterification of fatty acids hydrolyzed from chylomicrons (dietary fat) in adipose tissue.   But does it play more of a role in the basal cycling than we are currently aware?  The researchers speculate:

The above was written in 2002.  Cianflone and colleagues continued to research down this path and I'll bring what they've uncovered to you as this story unfolds.  Before I close, I want to discuss insulin.  At right is the plot of is the plot of fasting insulin levels vs. body weight for all of the mice.  The line demonstrates a statistically significant positive linear relationship, but I think it's a bit distracting.  If you look at about the 40-50g section, this is where you find the cluster of mostly C3KO-ob/ob mice.  Their fasting insulin levels range from roughly 2X to 6X normal levels in the wild-types -- a 3-fold range amongst the group.  Over in the 50-60g section, you find the cluster of most of the ob/ob mice with fasting insulin ranging from almost 3X up to 9X normal -- again a roughly 3-fold variation within the group.   Now keep in mind that the C3KO-ob./ob's ate roughly twice the carbs of the wild-type mice, and almost 10% more than the ob/ob's -- their blood was coursing with postprandial insulin spikes!!  And yet they got considerably less fat than their ASP expressing ob/ob cousins.   So ... nah ... ASP has nothing to do with regulation of fat tissue mass ... right?
I'll leave you with a bit of commentary here.  Some of this is going to get a little personal so if that's likely to offend, please don't hesitate to use that X on the upper right corner of your screen now.  Gary Taubes writes in GCBC and WWGF that anything that puts fat into the fat cells and/or prevents its release will make you fatter.  He then states in a footnote on p. 123 of WWGF that "If you're wondering whether any other hormones make us fat, the answer is effectively no, with one significant exception.†"  With the footnote:  "† A hormone discovered in the late 1980s known as acylation stimulating protein is almost assuredly an insignificant exception.  It is secreted by the fat tissue itself, a process that is regulated at least in part by insulin."  When he does this he is either lying or inadequately informed, the latter being inexcusable for a science journalist who spent five years researching the "equivalent of 3 PhD's" on the topic ... the former being inexcusable, period.  Or maybe he thinks it's not just the scientists operating at suboptimal intelligence, but rather all of you TWICHOOB's out there who are just plain idiots, because if Gary Taubes *assures* you of something it must be true.  It's the same phenomenon that results in belly fat diet book authors blogging about wearing girdles and eating "starvation level" calories.  The irony is dripping, but escapes the adoring "another great post" fans.  The other bothersome thing is his use of footnotes to begin with.  In GCBC he makes a fantastical claim about tons of studies showing an average weight loss over 30 lbs greater on LC ... only to dial that waaaaaaaay back in a footnote (end of my ebook) stating that when we look at randomized controlled studies it's more like a few pounds more.  Why not just include that ASP statement right there in the text?  Because he'd rather you not even read the footnote.  The data dump onto this blog in the coming weeks vis a vis ASP is going to be rather staggering.  Mind you, I am not saying that fat, by stimulating ASP, makes us fat.  That's for my Metabolic Madlibs fun.  But the hypocrisy of the carbs drives insulin drives fat accumulation is mind boggling in its enormity.
I eagerly await Fred Hahn's scintillating intellectual response.  ;-)

markgillespie said…
These Star Wars puns are epic! Have you run out of them or could there even be another one to come?!
September 25, 2011 at 2:21 PM

Fashiontribes Diet said…
I feel like I'm tuning into a fab multi-part science mystery or Discovery Channel series: "On the Trail of the Elusive ASP"! So interesting - thanks!
September 25, 2011 at 5:49 PM

CarbSane said…
Thanks :-) The C3KO just hit me along with pronouncing the ob/ob mouse oh-bee. I'm not seeing others, but who knows! Katherine Cianflone bears a slight resemblence to Princess Leah ;)
September 27, 2011 at 6:29 AM