- April 10, 2012
It's been a while since we last had a Star Wars installment.  With the War on Insulin raging out there, it seemed a good time to re-address the FIRKO mouse in this series.  You gotta admire the tireless efforts of   TWICHOOB's in rescuing a hypothesis.  It's a brave face to herald an Insurgency while one's hypothesis is circling the drain. 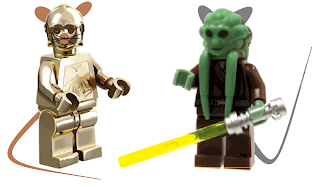 There are a number of IRKO mice -- Insulin Receptor Knock Out.  There's FIRKO (Fat), LIRKO (Liver), MIRKO (Muscle), NIRKO (Brain).  Interestingly enough, two of these (M&F) are consistent with and seem to support TWICHOO, while the other two (L&N) present serious stumbling blocks (in the case of LIRKO, pretty much fatal for the hypothesis).  Allow me to introduce our characters for today's saga, C5L2KO and Kit FIRKO.

C5L2KO is a mouse lacking the C5L2 ASP receptors on its fat cells.  FIRKO is lacking fat cell insulin receptors.  ASP, acylation stimulating protein, plays a key role in fat tissue regulation, but increasing roles in non-adipose tissues are being identified.  We've previously discussed an ASP-deficient knockout mouse:  C3KO (see Fat Tissue Regulation ~ Part II: Meet C3KO,   Fat Tissue Regulation ~ Part III: C3KO Meets Obi No Leptinobi).   The C3KO mouse is the equivalent of a Type 1 diabetic to insulin -- it lacks ASP.  These mice are resistant to obesity, and when genetically obese mice, the ob/ob's, are also made ASP deficient?  Well, these mice ate more than regular ob/ob's but didn't become as obese because of an increased metabolic rate.  So the next target was to identify a receptor for ASP and see what happens when you knock that out.  I discussed the resulting C5L2KO mouse in great detail in Part V of this series.

A summary, then, of the similarities between C5L2KO and Kit FIRKO.  Both of these ARTIFICIALLY ALTERED MICE:
OK ... so what does this mean to you and me?  Anything actionable here?  Answering the second question first, probably not unless and until some pharmaceutical agent or otherwise is identified that specifically nullifies only the fat cell insulin receptor or the ASP receptor.  Interestingly enough there may be something in the ASP pathway that can be addressed with antibodies.  ASP seems far more specific to fat tissue metabolism and regulation, whereas insulin is so ubiquitous in seemingly every tissue.  Therefore, IF we look to interfere with specific action (e.g. in fat cells) ASP may be the better target with fewer unintended side effects.
But for the foreseeable future, answering the first question, this information is more important to you and me in putting claims we hear in perspective.  If carbs drives insulin drives fat accumulation, then fat drives ASP drives fat accumulation.  Only the latter is actually through a hormone secreted by the fat tissue itself so, IMO, a far better candidate for a regulator of fat tissue mass.  It sure seems to play a role, whether that is a governing one or not remains to be seen.

I haven't blogged on this much yet, but I've got this itch to address eating disorders and such because of the vacuum surrounding how carbohydrate demonization can (and has) led to folks developing pretty serious eating disorders, including both bulimia and anorexia.  It's time someone starts talking about this a bit more.  It might as well be me ;-)
Acylation Stimulating Protein (ASP) Gary Taubes Fact Check Human Metabolism Insulin Obesity

Nigel Kinbrum said…
If something stops excess food from being stored in fat cells and it doesn't get burned due to a sedentary lifestyle and a lack of BAT, where does it go?

Tomas said…
I think Matt Stone likes to rant about eating disorders caused by LC or any kind of restricted eating. I like this one
http://180degreehealth.com/2011/11/restrained-eating-and-obesity
April 11, 2012 at 10:35 AM

CarbSane said…
I maintain I would never have become significantly overweight had I not gone on my first crash diet. I am not genetically obese. Couple that with body image issues and it was all downhill from there. Matt has some great writings on this, however his refeeding stuff never appealed to me because it involved essentially intentionally gaining weight. The problem is then that just because one's metabolism rebounds, somehow the excess fat is now going to come off differently as you spontaneously eat a little less or feel more frisky and move a little more ... or by what? Magic?
April 11, 2012 at 10:57 AM

Tomas said…
Yes this is controversial. But if overfeeding makes you lose interest in pigging out, or, if you will, "decrease food reward" long term. Or you gain some muscle along with the fat, because overeating would probably not waste muscles... Further long term studies are warranted. :)
April 11, 2012 at 11:10 AM

bentleyj74 said…
Although Matt wanders into woo land too often for my taste I'm familiar with this one and I agree. In fact it is one of the few places where I think Stephan Guyenet drops the ball on an otherwise actionable and "higher than average probability for success" plan.

These two things [food reward/consequences of restrained eating] will have to come together imo to really move the ball forward.
April 11, 2012 at 11:15 AM

Tomas said…
Stephan is too much into meditation to understand the perils of us mortals, when we are confronted with the marvels of modern cuisine and food processing.
April 11, 2012 at 11:29 AM

bentleyj74 said…
I know where he's coming from though...the culture and his perspective and the things he takes for granted all feel very familiar to me.

The only difference between us is that I got to experience the other side of the coin as a non citizen who still had to pay the taxes and was glad to go home. Oh, and that I don't study it professionally :).
April 11, 2012 at 11:35 AM

Beth@WeightMaven said…
And the more recent Matt Stone is sounding a lot like Jimmy Moore. It's all about one's health, not one's weight. Ref his comments on the Paleo Summit about the woman whose fasting insulin was reduced to single digits, but oh bummer, she's still 50lbs overweight.
April 11, 2012 at 1:28 PM

bentleyj74 said…
I was nosing around looking for examples of how these two things might come together and the McDougall ten day live in program probably comes the closest to what I would have in mind although I would include follow up counseling and one on one coaching as non negotiable for success.
April 11, 2012 at 2:18 PM

ProudDaddy said…
Most successful bodybuilders (and my go-to-guy, Adel) will say that a little overfeeding while strength training is required to add muscle mass. But as Adel aka Prof Dr Andro will also say, this does not necessarily apply to someone who already has 25% body fat. There are studies that clearly show overweight subjects can both boost metabolism and increase muscle mass by strength training with a hypocaloric diet. (I think I posted one such study in th Ask Carbsane forum...hint, hint, Evelyn).
April 11, 2012 at 4:13 PM