In this installment, we reunite with our old friend C3KO mouse to learn a little bit more about the role of acylation stimulating protein, ASP, in the regulation of fat tissue (and muscle) from this study:  Differential regulation of fatty acid trapping in mouse adipose tissue and muscle by ASP.  The C3KO mouse was discussed in Part II of this series.  This mouse lacks the gene to produce a protein called C3 (short for Complement 3) which is a precursor for the formation of ASP.  Thus C3KO mice are ASP deficient.  The C3KO is to ASP as a type1 diabetic is to insulin.  These mice are also resistant to obesity.  BTW, hyperASPemia accompanies the hyperinsulinemia and hyperleptinemia of obesity when it's measured.

ASP-deficient mice have delayed postprandial triglyceride (TG) clearance and reduced WAT mass. The objective of this study was to examine the mechanism(s) by which ASP deficiency induces differences in postprandial TG clearance and body composition in male KO mice.

The first thing they looked at was the functioning of the fat tissue (WAT) itself, and muscle and liver,  to see if there were any underlying physiological differences.  Using different radiolabels it was determined that aside from differences in NEFA uptake by BAT (implications?), rates/activity of all of the following were similar between ASP-treated C3KO and WT:  NEFA uptake, TG synthesis, intracellular lipolysis, LPL, and glycolysis.   From the intro (decluttered of reference and broken to bullet points):

The authors sought to elucidate the possible role of ASP in this scenario.  The major finding of this paper was that ASP also upregulates LPL in WAT (increase about 65%) and downregulates it in muscle (decrease about 35%).    The paper is detailed and, IMO, it's easy to get bogged down by the methods and radiolabels and miss the big picture.  That big picture is Figure 6 from the article, below.

The diagram shows the actions of ASP in WAT and muscle.  Solid arrows indicate stimulation, dashed arrows indicate suppression.  In fat tissue, ASP acts to facilitate uptake and esterification of NEFA to triglycerides -- e.g. ASP stimulates "fixing"/deposition/accumulation of fatty acids in the fat tissue.  In muscle, ASP suppresses uptake of NEFA liberated by LPL but tips the balance of the TAG/FA cycle in favor of NEFA for oxidation.  I'm a little confused by the diagram, as the TAG/FA cycle is not shown fully in the WAT even though it is shown in muscle, however it is clear ASP suppresses NEFA release from adipose tissue.
This is reminiscent of the diagrams of insulin action on adipocytes.  Indeed it's the same!
Let's see,
Thus ... by the Gospel according to Taubes, ASP is a fattening hormone that regulates fat tissue. And thus since dietary fat (chylomicrons) stimulates ASP production, dietary fat drives ASP drives fat accumulation. Back to the paper ... from the discussion (decluttered, direct quotes indented, my commentary is not, bold-italics emphasis is mine).

In rats, postprandial heparin-releasable LPL activity increases by 65% above fasting values in epididymal and retroperitoneal WAT while decreasing by 25% in soleus muscle 1 h after the ingestion of a high-carbohydrate meal. This effect is partially diminished by inhibition of insulin secretion from the pancreas or reduction of postprandial insulinemia by Intralipid injection and high-fat meal feeding.

Yes, may explain, but in this case -- combined with the plethora of other studies by this research group and a few others -- I think more conclusive language is warranted.  Hormones aside, if you delete X and observe Y, this supports the role of X in the Y phenomenon.  But if you then replace X and no longer observe Y, combined this is strong support for a direct role.

It is important to point out, however, that, compared with WT mice, male KO mice have enhanced insulin sensitivity, as indicated by a decreased insulin response after a glucose tolerance test.  Yet, despite enhanced insulin sensitivity in KO mice, which might be expected to enhance WAT LPL activity, delayed postprandial TG and NEFA clearance is characteristic of these mice. This suggests that insulin action is not the sole regulator of postprandial LPL activity and TG clearance.  Insulin-mediated upregulation of postprandial LPL activity in WAT may be overwhelmed by the effects of ASP deficiency on LPL activity and WAT lipogenesis, resulting in delayed TG clearance in KO mice.

Insulin can't do it alone.  It apparently doesn't do it alone.  The remarkable resemblance of the fat tissue and metabolic profile of fat tissue receptor knockouts for insulin and ASP is compelling evidence that these two hormones work in concert and perhaps to some degree are redundant, and in the postprandial state, which "rules" depends on what macronutrients have been ingested.

Despite the well-documented regulation of LPL activity by insulin and nutritional interventions, the mechanism by which insulin elucidates its tissue-specific effects on LPL activity, particularly in muscle, is poorly understood. In WAT, it is suggested that the short-term effect of feeding and insulin on LPL activity is mediated by posttranslational modulation that includes increased LPL activation, increased active LPL release, and decreased LPL degradation. More recently, it was proposed that, during fasting, a gene is activated that downregulates LPL activation without affecting LPL synthesis.  [...]  ASP stimulates ... lipoprotein hydrolysis by stimulating TG synthesis in adipocytes and, hence, by removal of NEFA inhibition of LPL, despite the lack of any direct stimulatory effect of ASP on heparin-releasable LPL activity (as opposed to the stimulatory effect of insulin on heparin-releasable LPL activity). In the present work, a similar mechanism may be employed in WAT and a reciprocal one in skeletal muscle. In the muscle, increased endogenous TG lipolysis and decreased lipogenesis by ASP may exert a feedback inhibition on in situ LPL activity. The tissue-specific mechanism and signal transduction pathways by which ASP regulates the balance between lipolysis and lipogenesis in skeletal muscle are yet to be examined. 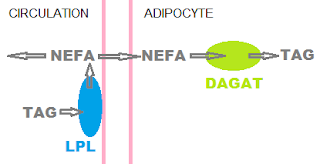 There is significant evidence that ASP directly regulates/stimulates the enzyme that goes by the acronym DAGAT in the esterification process.  Triglycerides are assembled by attaching FA's sequentially to the G3P molecule.  We have one enzyme that tacks on the first FA to form monoglycerides, the second FA to form diglycerides, and the third FA to form the triglyceride.  DAGAT catalyzes the third enzyme and this step is believed to be the rate limiting step in the esterification.  ASP stimulates DAGAT.   I've discussed this earlier in this series as well, also work from Cianflone's group.  By removing NEFA inside the cell, this enhances NEFA uptake (facilitated diffusion) and lowers local NEFA concentration surrounding the LPL enzyme.  LPL activity is controlled (at least in part) by product inhibition -- elevated NEFA = less lipolysis, low NEFA = more.
So what am I saying here?  Does fat make you fat?  Did your fat cells go wild, overproduce ASP and make you fat?  I don't believe so.  But ASP is the ultimate example of the inanity of TWICHOO.  Because you cannot take a myopic snapshot in time of the actions of a single hormone on the adipocyte.  And though these KO models have limitations in drawing inferences to what occurs in humans without such selective metabolic defects.
But here's a thought.  You knock out insulin OR ASP action in the fat cell, and the animals develop nearly identical characteristics in their fat tissue:  reduced mass, and polarization of adipocyte size to small and large rather than a spectrum of sizes (not sure it is usually normally distributed, I think it's more of a skewed bell-shape).  That fat accumulation is impaired/altered by EITHER insulin deficiency or ASP deficiency -- where at least in the case of ASP we see increased insulin sensitivity, not sure if converse has been studied -- would support a hypothesis that NEITHER hormone, acting alone, can regulate proper function.   Taken together with evidence that physiological hyperinsulinemia in otherwise normal humans and animals, can, but does not with regularity result in obesity, and this notion that insulin is the be all and end all of obesity just seems rather silly ... well to anyone objective in the audience.
I also just realized we have yet another paradox on our hands.  There is overwhelming evidence that  "classic" metabolic syndrome and/or diabetes associated with obesity* starts in the fat tissue with inefficient trapping of dietary lipid and/or excessive release of NEFA into circulation.  The metabolically healthy obese are that way because their fat cells are still functioning properly, albeit not to the liking of their host who would rather be slender.  It's when fat cells fail to do their job that metabolic mahem ensues.  And yet despite the abnormal fat tissue in both FIRKO and C5L2KO (fat insulin and ASP receptor knockouts respectively), and inability of these mice to properly sequester lipids, they are otherwise whole-body insulin sensitive (even moreso than their WT counterparts) and normoglycemic.    What a tangled web!
*  I'm beginning to think this singular all encompassing hypothesis to explain all is a dangerous trap to fall into.  In the case of diabetes, we're diagnosing a symptom that can have many causes.   I liken back to Jenny Ruhl's first podcast with Jimmy Moore when she likened this to diagnosing a person with "cough".  Coughing, or fever, or inflammation, or swelling, or whatever is not the disease/dysfunction ... it's the symptom.  So just as many things can cause any of the aforementioned, so too, hyperglycemia can be caused by more than one or two underlying pathologies.  Indeed I've been looking into the genetics a bit.   The so-called MODY diabetes is not even one type!  This abstract identifies six ... SIX ... different types of MODY, and MODY only accounts for less than 5% of all diabetics.
Where fat cells are concerned, more and more, it looks less and less as if what goes in has much to do with the spectrum of IR-to-T2.  Seems it's on the release end ... both how much and perhaps what.
Acylation Stimulating Protein (ASP) Adipose Tissue Chylomicrons Gary Taubes Fact Check Insulin Knock Out Animal Models Obesity Triglyceride/Fatty Acid Cycle

ProudDaddy said…
There seems to be little doubt that obesity is a symptom of many different dysfunctions. But perhaps there are a much lesser number of causes of said dysfunctions, else why did we Americans all start getting fat at the same time?

To explain myself further, one can trace a whole bunch of bodily dysfunctions from a single bacterial infection.
June 29, 2012 at 10:48 AM

CarbSane said…
It's a Perfect Storm! Though I truly believe the 90% of factors by numbers would matter much less if the family structure had remained intact.
June 29, 2012 at 11:46 AM