- June 11, 2012
Thanks to a certain journalist, much of the discussion of fat tissue metabolism on the internet presents a very myopic view of things taken out of context.  One example of this, is that in Chapter 22 of GCBC, Taubes lists all of the hormones acting on adipocytes.  The caption on the graphic reads: 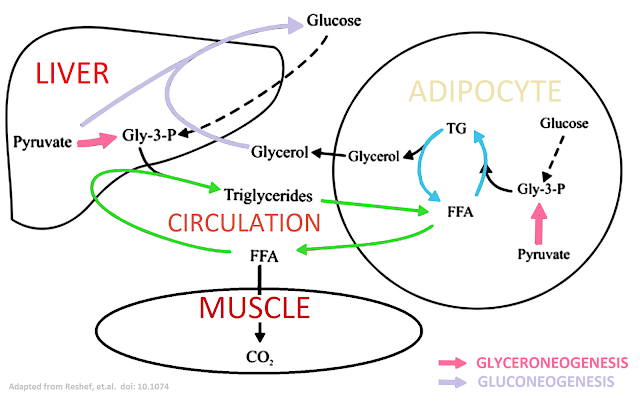 Ed Lee said…
Cool. I hope you will touch on the transportation of fatty acids in serum, because I am trying to understand when and why FA is transported either as NEFA or as TG wrapped in lipoprotein particles. I'm particularly interested in exploring the role of the liver in producing TG carrying VLDL particles.

Q: "Insulin (via HSL) fills the reservoir with FFA". Can you explain this "reservoir"? It's been a while since I read WWGF, but I think the explanation is that TG is too large to pass through fat cells, so it needs to be broken down like a big piece of furniture. Is there some sort of reservoir in the fat cells where FFA pool, and they can either exit the cell, just stay there in this reservoir, or get re-esterified into TG?
June 11, 2012 at 8:24 PM

Susanne said…
I don't know about your fancy CW pharma-shill science, this evening I cut my thumb as I was slicing zucchini, which is all the proof I need that CARBS KILL. Also, on a completely related note, I blame you and your ilk* for introducing me to the live-action trainwreck which is the Mark's Daily Apple nutrition forum. I am now as hooked on it as hopelessly as on the most sordid of TV reality shows that I always swore I was too civilized to watch. Except on Jersey Shore the answer rarely involves drinking a few extra slugs of coconut oil and a personal anecdote about how dropping wheat saved your family, no matter what the "so-called published experts" say.

CarbSane said…
Hey Ed, One of my peeves from the inception of this blog (and before) was that nobody seems to be concerned in the LC community with free fatty acids. Fats have very limited solubility in body fluids (blood, cytosol = cell fluid) and are able to pass through membranes without transporters. Therefore they are "toxic" in elevated amounts even if not directly so. What this does is force the mitochondria to burn fat even when glucose availability is high, but the fat burning is also inefficient and incomplete leading to build-up of intermediary metabolites: ceramides, diacylglycerols, etc. So in all realms, our bodies seek to "deactivate" fatty acids by esterifying them into TAG until needed. This way the levels can be regulated, and thus transport regulated, etc. Even free fatty acids in circulation are not "free", they are bound to albumin, but this binding is easily broken thus making these molecules more readily available for energy if needed. But there is limited "solubility" of these (I did the calculation once -- if you look at the chrono list of posts, it was called something like a Matter of Concentration.) which is why most fats are transported as triglycerides wrapped in protein shells -- lipoproteins -- that are "dissolved" (not proper term, but OK for this purpose) in the blood.

Lastly, in terms of the "reservoir", that was a bit of a metaphor, however one can envision there's a little pool of FFA that has one of two fates -- export to circulation, or esteri/re-esterification. If you look on that same list for Triglycerides, I did a 3 part series on that. The model in the major paper on which that was based (I think it's Part I) describes a triglyceride pool in the liver. I imagine this to be analogous.
June 12, 2012 at 4:11 PM

Beth@WeightMaven said…
Probably wasn't me! I've never been to the MDA forum. I find forum threading to be less than satisfactory, so have never been active in any.
June 12, 2012 at 5:13 PM

Susanne said…
Apologies all around then. I consoled myself after the squash with some homemade seafood enchiladas, Mexican brown rice, lard-free black beans, and some nightshade-heavy salsa. Fortunately, as a trained archaeological professional, I eat a Bronze Age diet, so I am not afraid of NAD. :)
June 13, 2012 at 2:53 AM