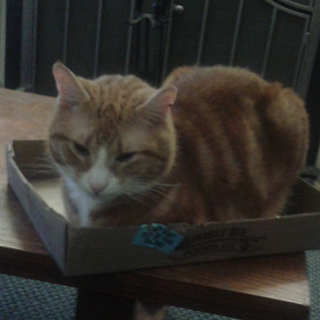 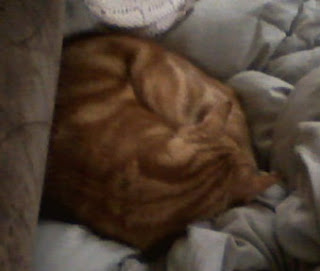 Mike said…
Haha. Our youngest cat is a box cat, too. Whenever something arrives in a box, he waits for me to unpack it and will crawl in as soon as I set it down. For the next week, it will be his favorite thing and we'll often come home to find him curled up in it. Then another box will arrive and he'll be mad about that one.

Oh, and to keep on topic, we switched both our felines to a "Catkins" diet of wet food when the older one was diagnosed with diabetes. She recovered quite nicely and is noticeably happier.
June 15, 2012 at 7:03 AM

CarbSane said…
Almost 3 years ago now, this cat was quite sick. We took him and his brother to the vet and he said he had bad allergies. We switched him to canned food -- mostly tuna for cats, though now we get what we can that has only a little rice in it. His brother who seemed otherwise healthy died inexplicably a month or so later, but this guy is doing very well. Still has a skin issue that flares from time to time, but he just turned 13 and acts like a kitten half the time.
June 15, 2012 at 7:44 AM

Unknown said…
Only a matter of time until someone accuses your cat of being a witch's familiar
June 15, 2012 at 10:03 AM