- September 23, 2012
I haven't forgotten my Egg Survey!  Thanks to all who participated, and essentially confirmed my memories of this aspect of childhood were quite "average".   There were also quite a few new names amongst the responders so I'd like to extend my belated welcome to the Asylum!

First my own answers (and for my husband as well), and then a brief summary:


To this day,  I don't think I've ever eaten more than 3 eggs in one sitting or in one day even.  Well, maybe when I make my deviled eggs, I could eat that many if they didn't get eaten out from under me ;-)   I'm one of those people who is streaky with eggs -- I can be in the mood for them every day for a couple of weeks, then can't even look at them for days on end. 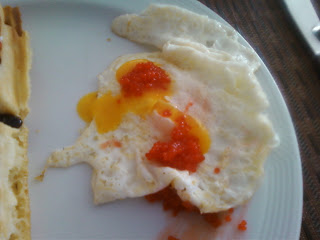 I very much enjoyed learning about "soldiers" dipped in egg yolks.  I never much liked soft boiled, poached or sunny-side up or over easy eggs as a kid -- "over smashed", hard boiled or scrambled.  But nowadays soft yolks are a favorite "memory" food for me.  On vacation I had 1-2 eggs every morning, over easy, with a piece of the artisan bread, lightly toasted, dipped in that yolk.    (Yes, that's a waffle there on our last day, the red stuff is caviar that I had with them every day!  Cell phone pic barely does the colors justice.) I associate the taste of egg yolk and rye toast with my maternal grandmother --  this combo transports me right back to childhood!

But enough about me.  There were roughly 40 responses, and using the average for those who reported ranges larger ranges, and upper limits for ranges like 2-3 (and I did my best with those who didn't offer a specific number), the average was about 5.5 eggs/week with a range of zero to a dozen.  That averages out to less than one egg per day.  Here's the frequency plot of that data -- FWIW, since this wasn't anything scientific!  But clearly there's quite a few who ate eggs near daily whether alone or in baked goods.  Which got a number of people thinking as well about pancakes and waffles.  Yes, there's not a full egg in a pancake, but between the egg and the milk, which is how my mom made ours from scratch (or with the mix that you added eggs and milk) they had some protein and fat in them.  My mom always added something extra too, like wheat germ (Anyone else eat Kretchmer's wheat germ?  Oh the agglutinin!!).

So what prompted that survey was the hub bub that arose out of the recent unveiling of new school lunch (and breakfast) guidelines.  I don't have children, but one can't help but keep up with the news about what they are feeding children in the schools these days.  What does this have to do with eggs you ask?

Well, a mother of paleo cavegirls wrote a guest post on FTA (while I'd rather not link to that blog under any circumstances, it's really not cool to discuss such things without letting people easily check out the original source for themselves, so here's the no follow link).  She lamented having to likely work some overtime in order to send her girls to school with lunch because of the woeful inadequacy of what they would be getting there.  Her girls (7, 10 and 11 in February of this year) were sent off to school with full bellies:  2-3 eggs, couple of handfuls of cherry tomatoes, and a share of a "pile of bacon".  Previously she had written to Richard lamenting how her paleo children were hungry all the time (no follow link), feeding them a rather LC version of paleo.  In the school lunch piece, she linked to another blogger's take (calling it well researched, sigh):  School Lunch Soapbox.  This woman has three toddlers (exact ages unknown) and bemoans both the protein and calorie recs in the new guidelines:

When it comes to protein, it gets worse. A K-5 student is only allowed 8-10oz of meat (or meat alternatives), high schoolers get 10-12oz per WEEK! A large egg without a shell weighs 1.7oz, my kids routinely eat at least three eggs for breakfast.

At least 3 eggs for breakfast?  Routinely?  Toddlers??  Reading this is what really sparked my egg survey, because this sounds absurd to me.  I'm from a family of five, and I would consider our egg consumption rather frequent, but we didn't go through a dozen eggs or more a day. Eggs were a fairly major protein source in our family at that, because we weren't big meat eaters.   I suppose living on a farm this might be plausible, but it is certainly not anywhere near the norm, and there is at least reason to question if such is optimal.  As to the calories -- really?  750-850 calories for lunch is insufficient?  Her toddlers eat more than that?  A Big Mac and medium fries comes in at just over that!  They eat that much for lunch after eating at least three eggs for breakfast?  Huh??  (There's lots of misinformation about nutrition and metabolism in that post, not sure if it's worth going into, but it's worth pointing out for some context I suppose).

In any case, the pronouncements from these two moms just didn't jibe with my own memories as a kid, nor do they jibe with literally thousands of hours caring for children of all ages in my teenage years where I routinely fed or supervised mealtimes in homes and group settings.  Is this how kids eat these days?  When we stay with friends and relatives with their kids I think I would have noticed ...


The reason I asked specifically about egg eating "back in the day" is that I believe the LC, WAPF, and paleo communities do seem to romanticize, for lack of a better word, the nutrient and fat content of the pre-Ancel Keyes diets in the US.  I imagine 20-30-somethings read some of what's written and really do envision that kids raised before the fear of fat was instilled in everyone, were practically bathing in nourishing healthful fats and consuming fatty foods with abandon.   While there can be no doubt that the cholesterol fears reduced the number of eggs many ate -- particularly those "at risk" who were tsk tsked by their doctors -- the impact was not nearly as dramatic as many seem to assume.  Per capita availability of eggs in the shell (adjusted for waste) went down 30 percent from 1970-2000, but with processed egg consumption going up the net reduction was only 12%.


Perhaps because we weren't big meat eaters, I've always seemed to know which foods contained protein.  We had fish (fresh and canned tuna & salmon) and chicken, Mom did cook the occasional meatloaf  meat balls or nitrate-free uncured all beef hot dogs for the rest of us.  Protein was "supplemented" in some meals as beans (usually in soups), eggs in potato or veggie pancakes, cheese (including cottage and farmers) or yogurt.  Protein was not a main course for us ... my dinners looked a lot like the new My Plate sans a glass of milk (or any drink),  and rice, potatoes or corn instead of "whole grains" (no bread at dinner).   Dinner at a friend's house was always interesting because there would be a bigger piece of meat of some sort and a side dish of veggies.

Fat?  I don't recall my Mom being concerned one way or the other, except with that fried foods upset her stomach.  This may have also been an aversion to lard in her case.   So on the rare occasions we ate out (or took in KFC), breading and/or skin was at least partly if not entirely removed.  We did not eat mayo or salad dressings -- oil (cold pressed sunflower mostly or olive) and vinegar.  When she did fry, she used minimal oils.  Mom used to add avocado to a lot of things, and we ate fresh coconut in season.  We only ever had butter in our house which was spread on toast, a pat on potatoes or rice, almost never on veggies.  There was no margarine or veggie shortening.

For any newcomers, or in case I haven't mentioned it enough here, me and my siblings were lean kids, erring on the side of skinny at times, but not weaklings by any stretch.

OK ... that's it for today ... I pretty much wanted to keep this on the egg theme.  I have some thoughts of my own on school lunches and childhood nutrition recommendations, I'll save for another day.
Cholesterol Diet Comparisons Eggs Protein

Susanne said…
I just read both Mom's letter and the reply and I ... have no words. No printable ones anyway. Is it wrong of me to look forward to the day that these kids become teenagers, and subsequently turn either to militant veganism or clandestine Pop-Tart cramming?
September 23, 2012 at 1:10 PM

MM said…
I'm not quite forty. I can vaguely remember my mom learning about the diet-heart hypothesis. The things I remember changing in our house were switching from whole milk to 2%, and from butter to margarine. I don't really remember our egg consumption changing a whole lot, but it wasn't particularly high anyway.

I think that woman's calorie estimation must be off. I don't think 800 calories worth of food would have fit in any of my toddlers' stomachs at one sitting.

Anonymous said…
Eh, depends on the toddler. My ultra active toddler can put that away in one sitting, but it's not typical consumption. And our experience is that eating a really huge amount of calories= way more poop for our toddler, so we don't severely limit food, but we also don't try for 800 cals/meals x 3-4 meals a day either. We just let the kid eat to satiety and stick with simple, mostly whole foods.

Toddlers have absurdly high calorie needs especially if they are very active, on par with many adults, but they seem to self-regulate much better and just dump the excess (heh) if there was overconsumption.

Anonymous said…
As to the guidelines, what used to be a floor is now a ceiling, and that's a legitimate concern buried in all the woospeak on the soapbox post. The assumptions of commenters defending the new guidelines that the lower limits won't be the effective ones is...optimistic at best. For example, protein and calorie requirements have effectively been reduced because the total minimum food amount is lower.

The new guidelines are not net neutral and have real downsides, although utilizing Sally Fallon commentary to critique them is...not helpful or useful.
September 24, 2012 at 12:56 PM

Galina L. said…
I think after some period of limitation of some product in a population it is reasonable to expect a period of exessive consumption, then everything will level off.
I am sitting right now in a public library in Moscow, I just arrived there 2 days ago.
September 26, 2012 at 9:28 AM