Back to our regular programming ...

In the last post in this series I discussed covalent bonding, the type of bonding involved in most biologically relevant compounds.  Covalent bonds:
In this post we'll discuss one of the concepts that makes the world go round.  Well, it's not responsible for the rotation of the earth, but in terms of properties of compounds -- how they behave  with other compounds, react, have a propensity towards oxidation, etc. and molecular structure (e.g. think protein folding), polarity plays a key role.   And it all starts with the unequal sharing of electrons in covalent bonds.
Non-polar and Polar Defined
In general, the descriptive "polarity" refers to the distribution of charges in an object.  In chemistry, those objects are molecules and when we are talking charges, it is electrons.  The protons in atoms are fixed in the nucleus and do not migrate around a molecule.  The electrons, however, do move around.  Still, to simplify matters, we envision the electrons as "fixed" in the regions in which they spend the most time.  A bonding pair of electrons in a covalent bond spends most of the time between the two nuclei.
Electron Affinity / Electronegativity
While technically different terms/quantities, the concepts of electron affinity and electronegativity are often used interchangeably in basic chemistry.  Either is a measure of an atom's "liking" for electrons.   Another way to look at this is that electrons are drawn in by or held more closely by atoms that have a higher affinity for them.  It is generally taught that N,O,F are the biggest electron hogs.  In biochemistry, the most important ones are N and O, and we can add S in as well.  The VIIA elements also have high EA/EN, but generally exist as the ultimate electron hogs in biological contexts -- that is, as anions.
Polar Bonds = Unequal Sharing of Electrons
Differences in electron affinity -- or electron drawing power -- between the two atoms sharing electrons result in the electrons being more closely associated with one atom vs. the other.  Let's use two simple molecules to illustrate this:  H2 and HCl  (hydrogen and hydrochloric acid respectively).  I've drawn them below:

Both of these molecules contain one single covalent bond.  On the left is the H2 molecule where each hydrogen contributes it's single unpaired electron to the bonding pair that spends the majority of its time between the two hydrogen nuclei.  The nucleus of each hydrogen atom contains one positive charge to which this electron pair is attracted.  It's like a tug-of-war between two teams of equal strength, and the sharing is equal.  This is shown in the exaggerated H-H molecule with the e's midway between the H's.  On the right I've shown hydrochloric acid (just the valence e's of the Cl) where, again, each atom contributes one unpaired electron to the bonding pair.  However the size of the arrows is used to indicate how the H nucleus, with it's lone proton +1 charge has very little drawing power, while the drawing power of the +17 charge on the Cl nucleus is considerably greater.  This results in the electron pair spending more time closer to the Cl than the H -- a non-uniform distribution of charge in our molecule.  This is also like a tug of war only now team chloride is much stronger than team hydrogen (since there are other electrons around, it's not 17X stronger).  I've depicted this below (constructed using this tug-of-war figure).

On the left, the blue flag may move a bit left and right from the starting central point, but the evenly matched sides keep it mostly in the center.  On the right, one team is much stronger and the flag spends most of its time near the line (light green) for the win.  The poor guy/gal on the left may get surges every now and then and pulls the flag back, but he/she's mostly just hanging on for dear life.  Indeed HCl is called hydrochloric acid because this bond is so polarized that when this molecule is dissolved in water, that hydrogen loses its battle over control of the electrons, and the bond breaks with the Cl taking full ownership of the electrons, becoming a Cl- ion and the remaining H is but a proton, H+.   This will be discussed in more detail when we discuss acids and bases.
Dipoles, Dipole Moments & Partial Charge Notation
The HCl molecule is a classic example of a dipole.  In the context of chemistry, a dipole is the electrical equivalent of a bar magnet, as shown at right.  A dipole is a molecule in which the electrons are more concentrated on one side (-) leaving an electron-depleted side (+).  This is a good analogy in more ways than one, but the primary analogy is that you cannot isolate the magnetic poles on a bar magnet which distinguishes between a dipole and an ionic compound.  In HCl, the electrons spend most of their time on the Cl side of the molecule, but they do not belong to the Cl atom.  In NaCl, as previously discussed, we have distinct particles -- sodium cations and chloride anions -- isolated charges -- held together by the attractive electrostatic forces between them.  The cations have relinquished ownership of the electrons that the anions have taken ownership of.  But a dipole is a distinct particle (molecule) where the electrons are concentrated to one side.  It is important to remember that dipoles are neutral particles.   We will discuss the behavior of dipoles in a future installment (or two!).
In more complex molecules, each polar bond is said to have a dipole moment.  Imagine the tug-of-wars above being multiple ropes in three dimensions, each being a dipole moment, the combination of forces causing a net movement of the flag or shift in charge distribution in one direction within the molecule.  This can create geometrically asymmetrical dipoles, but for the most part we can still approximate the behavior with our simple "bar magnet" model.

When trying to predict the behavior of polar molecules, or denote the presence of a polar bond, these dipole moments are indicated with either the "del" or partial charge notation, or an arrow.  These are shown for HCl at right.
Is It Polar?
Polarity is an important characteristic for predicting the behavior of molecules, therefore being able to look at simple structures and determining if they are polar is a helpful skill.  In order for a molecule to be polar it must:


Some other things to consider:
Let's look at a few examples. 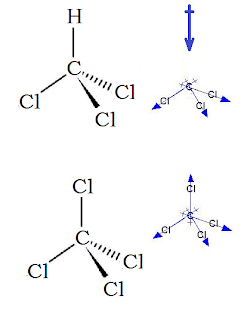 While the C=O bonds are polar, because the molecule is linear, the ← → dipole moments cancel out and the molecule is non-polar.  Contrasted with water, each molecule contains polar bonds, but in H2O we have asymmetry while in CO2 we do not.

With larger molecules, we often talk about polar character, or polar regions, or polar "functional groups".  The simplest functional group is an -OH, which designates a hydrocarbon an alcohol.  For example, w/o showing 3D orientation, left to right we have methanol, ethanol and octanol.  The oxygen in methanol pulls the electrons from the carbon towards it, and still has pulling power for the electrons in the rest of the relatively small ethanol molecule.  But at some point, that sole oxygen doesn't impact the electron distribution "downstream" in the molecule.  Octanol is a compound that has net non-polar character because the non-polar nature of the long C-H chain dominates the overall behavior of the molecule.  However the OH functional group still retains its polar characteristics.

We discussed this previously in terms of "fatty" acids aka carboxylic acids.  These molecules have a carboxyl group often written -COOH.  In these structures, the C's and H's of the "backbone" are not shown, each point on the sawtooth is a carbon.  The carboxyl group with two oxygens is quite polar, and the short chain carboxylic acids (acetic, propionic and butyric) are polar molecules.  However as the chain gets longer, the non-polar "tail" dominates the behavior of the molecule and overall, LCFA's are "fatty" acids because they have overall non-polar characteristics.   As we'll discuss in upcoming installments, polar molecules are water (the "solvent" of our body fluids) soluble while non-polar molecules are not -- oil (non-polar) and water don't mix!

Upcoming Topics:  Electron Ownership & Oxidation State,  Behavior of Polar and Non-Polar Molecules  (at some point we'll talk about how this in the context of cell membranes, transport proteins, lipoproteins, etc.),  and Solutions.  Not sure what order just yet ...
Posted by CarbSane at 7:14 AM

"Even the Pentagon admits it's unacceptable." Sexual harassment cases have plagued organizations for years.

It's not as if they truly knew how they had been intended to manage their chain of command all the way down the? line... specifically when the act or event happens privately and it is even even worse when the doctors and lawyers are incompetent.

My homepage :: How To Cure Premature Ejaculation Free

Feel free to visit my webpage: get lean eating plan for Women