- December 22, 2012
I'm working on a post about hyperinsulinemia and obesity in humans.  It may well turn into several posts.  But in one study I will be discussing they identified hypersecreters according to something called the corrected insulin response, CIR.  Sometimes this is further "standardized" as the CIRgp which is evaluated at the peak glucose reading.  The CIR is value calculated following a standard OGTT.  If you have data from your OGTT, you can calculate your own and determine how you rank.

The CIR was developed by Sluiter and colleagues as outlined in:  Glucose Tolerance and Insulin Release, A Mathematical Approach I. Assay of the Beta-cell Response After Oral Glucose Loading.

From the dose-response relations between glucose and insulin after oral glucose loading, a reproducible parameter for beta-cell response was deduced. The main advantage of this parameter lies in its independence from the initial or reached glucose level.

This is a measure of postprandial insulin secretion.  The first thing they studied were 14 normal weight men with no family history of diabetes.  Readings were taken at baseline, 10, 20 and 30 minutes into an OGTT with 100 grams* of glucose.  Subects consumed a carb rich diet for three days prior to the test.  Below is the data.  *I will note that most OGTT's use 75g glucose and some only 50g glucose.

I would additionally note that normal fasting insulin is considered to be < 20 μU/mL.  Now these are all normal weight men, with normal basal insulin secretion.  And I would repeat that these men all consumed a carbohydrate rich diet for 3 days prior to these tests.   Here are the plots of insulin and glucose for all 14 subjects.  (Note they are out of order so as to group in rows with similar vertical axes together in the first two rows, note disparity in last row.)

Subject 14 is rather fascinating as he is supremely hyperinsulinemic in the postprandial state, and while his glucose is still rising at 30 min, it probably doesn't go much over 150 mg/dL.  This guy's insulin increased over 10-fold in 10 minutes, and over 25-fold by 20 minutes!!   Yet his fasting insulin is a respectable 8 μU/mL (and a respectable fasting glucose of 89 mg/dL).  If he's eating a SAD and throughout the day, the TWICHOO brigade will tell you that his insulin is elevated all day long and we would expect him to be starving as his fat was locked away, and ... well, you know the schtick.  Subject 14 should be obese.  Or hypoglycemic.  But he's neither.  I would expect his 2 hour glucose to fall well below the magic 140 mg/dL that distinguishes IGT, so he's by all the usual parameters "normal".  However I think Subject 14 is your quintessential "compensator".  He has some sort of impaired glucose clearance that requires a heckuvalot more insulin to deal with than his counterparts and that would be included under the umbrella of the term "insulin resistance".

I would be rich if I had a dime for every time someone claimed their insulin was high based on having a high blood glucose level.  While generally correlated, we can see that for any individual at different time points, or between individuals with similar glucose levels, insulin can be all over the map.   So all of these people pricking fingers and envisioning any number of scenarios as to what their pancreas (and liver) is doing are really just guessing.

Now I could do 91 head-to-head comparisons here, but that would be pretty ridiculous.  However I've chosen a few to make some points.  The first interesting comparison can be made with Subjects 14 and 9.  Compared with "hypersecreter" Subject 14, Subject 9 starts off at similar fasting glucose levels (92 v. 89),  reaches similar 30 minute glucose levels (148 v. 150), and has the same fasting insulin level (both 8).  I would say that Subject 9 is supremely insulin sensitive.  His insulin increases to slightly more than double baseline at 10 minutes (v. 10+ fold), just under 6-fold by 20 minutes (v. 25+ fold), and increases slightly to 7-fold at 30 minutes (v. falling to ~22 fold).    All with comparable glucose responses.  While Subject 14 is a postprandial hypersecreter, Subject 9 is on the low end of secretion compared to all of the other subjects, and yet both have normal single-digit fasting insulin levels ... and it bears repeating that both are of normal weight.

Some other interesting pairs are: (all comparisons in parentheses are respectively for subjects in numerical order)

Subjects 5 and 6:  Similar glucose profiles (fasting insulin 5 v. 14).  Yet Subject 5's insulin 29,38,57 is considerably lower (especially if one considers AUC) than 6's progression of 67,87,115.  Both have a 30 minute blood glucose reading of around 130 while Subject 6 is secreting almost about twice the insulin of Subject 5.

The researchers also looked at intraindividual variation in 10 subjects.  These were different from the previous 14 and it is noted that they "were not selected on the basis of age, weight, or diabetic history" (not sure if they were males either).  These were given either 2 or 3 OGTT's, separated by at least 2 days.  I've cleaned up the table a bit and crunched it down below. 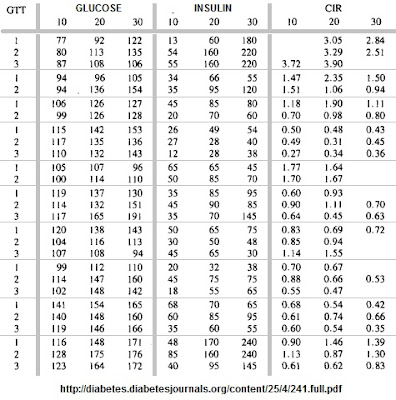 Now I think it is informative to note some significant variation between the results of the OGTT's in the same person.  We are talking things like a 50 point difference in BG at 30 minutes.  Or almost a 100 point difference in insulin at 30 minutes with almost identical glucose levels.  This small group is more varied than the normal weight men in the first part, recall this  OGTT was a higher dose (100g vs. 75g) than is normally used.

These variations -- both inter-individual and intra-individual -- are important to keep in mind as we discuss insulin secretion and how researchers identify some subjects as "hypersecreters" based on this ratio.
Blood Glucose Hyperinsulinemia Insulin Insulin Resistance Oral Glucose Tolerance Test (OGTT)