If paleo is so popular and there are so many people wanting help, why are seemingly ALL of these people so defensive about a little criticism?  Really, now.  It is a sign that the underpinning science is not-so solid and pointing that out threatens the franchise.   I haven't even criticized this guy much here at the Asylum and I challenge Robb to back up his ridiculous claims that I've been bugging him incessantly about the LC Cruise since long before the KKK David Duke thing.

"... that's why I'm doing Jimmy's silly ass cruise, BC it's a group of people who could teeter either way, and I'm going to do my best to help them understand the nuances necessary to make this stuff work for them. "

"It'd be a god-send if Jimmy cancelled the thing and it did not fall on me to make a decision." 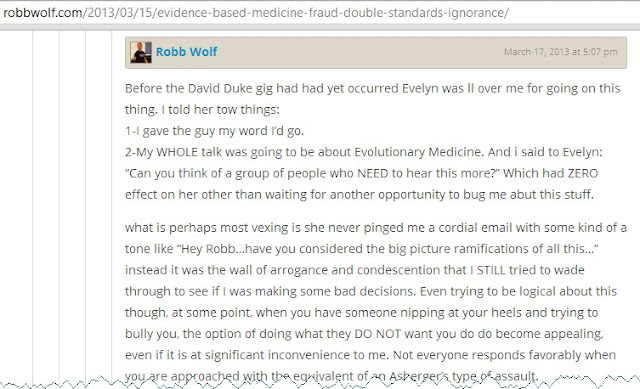 What, and get lost in the 48,000 unread emails?  I wouldn't want to keep him from helping people.  Here's the deal folks.  Robb and I were in contact after Krusegate and at his initiation, following his appearance on ATLCX.   I'm not about to take my time to try to convince Robb one way or the other about something that doesn't concern me.  I did reach out to him after the David Duke fiasco ... and this is the thanks I get -- having our relationship, such as it was, grossly misrepresented by Robb as a means to curry favor from his following and paint me as a stalker.  After it became clear to me that Robb had no intention of backing out of the LC Cruise, I dropped it.  I was obviously not changing his mind, he decided not to take my advice and set the record straight on his blog, and he never asked me to do so here when questions were asked or comments made.

This is a truly strange comment.  LCC 2014?  Is that a typo, or has Robb already written off 2013.  It seems odd to me that Robb hasn't had a little "join me on the Low Carb Cruise" thing on his website all along.  He doesn't advertise any of his appearances on his website, which is sort of odd for someone on a mission to help people.  Wouldn't it be helpful to have those people come out and see you?  In past years there has always been room on the LC Cruise almost up until the end, so it's really not too late to save this year's cruise.   But in addition, why would he only spare NO EXPENSE if critics of his appearance on the cruise continue to push the issue?   It's all about helping people, right?

Unknown said…
Yeah, screw anyone that doesn't buy the make-it-up-if-it-fits paleo narrative and re-packaging of the Atkins diet.
March 31, 2013 at 6:07 AM

Sanjeev said…
This is screwy in its own way

just in this one stance, Robb here is leaps and bounds more honest than the Taubesians.

Instead of "every scientist working in the field the last 60 years has been dumb, dumber AND wrong, and I'm right, and here are the cherry pickings to prove it",

paraphrasing, "service the market that's begging to be served". Paleo is homeopathy, therapeutic touch before those fields started in on the special pleading.

IMHO this is the real message, take the money when it's being shoved your way whether your snake oil actually is real. While you can, take the superficial patina of science.

Woodey said…
"If paleo is so popular and there are so many people wanting help, why are seemingly ALL of these people so defensive about a little criticism? Really, now. It is a sign that the underpinning science is not-so solid and pointing that out threatens the franchise."

Exactly what I been saying. I just watched this video of a speech by Christina Warinner on debunking Paleo: http://www.youtube.com/watch?v=BMOjVYgYaG8
March 31, 2013 at 12:18 PM

Unknown said…
Thanks. The girl behind him seemed a bit shocked when he said fuck em. He was dead serious when he said it.
March 31, 2013 at 9:43 PM

Jane said…
I have to say I feel sorry for the paleos. They were misled by people who believed the following
1. Ancient people who gave up hunting to become farmers had iron deficiency(wrong, the bone lesions are not due to iron deficiency http://www.ncbi.nlm.nih.gov/pubmed/19280675)
2. Ancient people ate no grains or legumes, and modern people are not adapted to eating grains and legumes, which are not 'nutrient dense' and cause mineral deficiencies (wrong)
3. Lindeberg's study shows the paleo diet is superior to other diets (it was compared to a diet containing micronutrient-depleted foods, which Robb Wolf did not realise until I told him).
April 2, 2013 at 6:51 AM

Anonymous said…
Undeniably believe that which you said. Your favorite reason appeared to
be at the net the simplest thing to have in mind of. I say to you, I definitely get irked whilst people consider worries that they
plainly do not realize about. You controlled to hit
the nail upon the top and defined out the entire thing without having side-effects , other people could take a signal.