- May 05, 2013
For reasons related largely to the difficulty (thus presumably expense) in measuring them, one fasting lipid that is not routinely assessed in lipid panels are the free fatty acids (FFA) aka the non-esterified fatty acids (NEFA -- Wholly irrelevant but I prefer the latter acronym as I like to sound them out in my head and knee-fah "sounds" better than eff eff ay to me).  And yet, like glucose, it is NEFA that is elevated in diabetes.  Unlike glucose, however, NEFA is elevated in non-diabetic obese as well as elevated NEFA preceding frank hyperglycemia in the progression of Type 2.

One of insulin's primary roles vis a vis adipose tissue is to regulate the "basal" triglyceride/fatty acid cycle, acting on both adipocytes and the liver, to keep NEFA in a relatively small range of levels (amounting to roughly half to three-quarters of a gram in circulation under normal fasted circumstances).

Early on in my blogging I came across and blogged on the following study:  Lack of suppression of circulating free fatty acids and hypercholesterolemia during weight loss on a high-fat, low-carbohydrate diet.  (n=16 per group in this study)

This figure says it all regarding insulin and NEFA.


I've had reason to revisit a totally unrelated paper on ASP that included individual data on various lipids and biomarkers including NEFA for 12 participants (a varied cohort of non-diabetics ranging from 18-70 yoa and BMI 19.5 to 52.8).  I had taken the data for apoB and NEFA and total cholesterol and plotted it.  Below is apoB v. NEFA 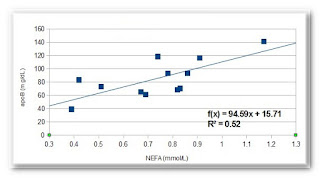 Based on the results of this correlation and the correlation of LDL to NEFA from the other study, I think it is fair to say that low carbers who have elevated apoB likely have high NEFA ... and perhaps higher NEFA than those following a higher carb diet.   Using the regression equation to predict NEFA from apoB for Jimmy Moore, when he had apoB of 238 in Oct 2012 (LDL-P of 3451!), his NEFA would be 2.35 mmol/L, or a mere 1.75 mmolar back in Feb 2012 when at 300 lbs pre-NuttyK, his apoB was 181.   Both of these levels would be astronomical (if they can be achieved -- more likely some fat is being deposited in his organs and muscle) as normal levels are roughly 0.5 mmol/L (this is a round value used by Keith Frayn in a generic calculation in Metabolic Regulation.  In studies in normal individuals it is usually in the 0.3-0.4 range).  Low carb "super human" triathlete Ben Greenfield just posted his lipids.  An apoB of 91 (for a normal LDL-C of 93 mg/dL) indicates that Ben has a higher than normal particle count and should perhaps consult with Dr. Dayspring.  The correlation equation here would predict a NEFA level of  0.795 mmol/L.

So, no, this is not a formal study.  Obviously.  I'm not even sure why I did the correlation.  I came across them in the "archives" when interest in my blog post on the ASP study caught my eye and found some files while transferring stuff between computers.  Nonetheless, there is a ton of evidence that NEFA levels play a role in metabolic dysregulation ... it's just not always clear exactly how or what.  Also, varied NEFA in the non-diabetic (or IGT) population are not very predictive, but then this mirrors blood glucose levels in a similar population.

If you're a low carber for whom LDL-C and/or particle number (measured as such or using apoB) has gone up, this may be of interest to you.  You may well have achieved the LC "nirvana" of preventing fat from accumulating in your fat tissue.  But just might not be a good thing.
Apolipoprotein B Blood Lipids NEFA/FFA

Anonymous said…
Hey there! I just would like to offer you a huge
thumbs up for the excellent info you have right here on this
post. I will be returning to your website for more soon.

Ben Greenfield said…
Chris Kresser has a great article on What Causes Elevated Particle #. I am not convinced ApoB is just randomly high. I will be testing for SIBO and H. Pylori, and also suspect that TSH and hypercortisolism are related due to reduced thyroid receptor sensitivity. So I'll be coming at this from a gut and stress standpoint and then re-testing.
May 6, 2013 at 6:48 PM

carbsane said…
Hi Ben! Could you give me and my readers an idea of your typical diet? Are you consistently LC or do you do any sort of cycling? HF or a fair amount of protein? Grams and cals (rough of course) would be of interest. If I were you the hormones would be more disconcerting than the lipids at this point. I've never seen an HDL that high though! Dayspring mentioned in one of his talks/interviews that this could be that HDL is carrying triglycerides -- not sure if I heard that correctly though.
May 6, 2013 at 9:19 PM