Insulin Dynamics I - Secretion vs. Sensitivity in Health & Disease/Decline

- March 11, 2014
Over on Facebook, I caught wind of a new paper on obesity -- a review of sorts -- suggesting that reducing postprandial insulin secretion and/or increasing fatty acid oxidation rates may be promising avenues for the prevention and/or management of obesity.  So that led me to a few references that led me to yet another comprehensive review paper on the etiology of diabetes:  Type 2 diabetes: principles of pathogenesis and therapy.  A graphic in that paper reminded me of one from a paper I blogged on almost four years ago:  Mechanisms linking obesity to insulin resistance and type 2 diabetes.  (I have this paper, but the link in that post is dead, when I get a FT that doesn't have personal "imprint" I can share.)

I decided not to update that old post since it focused on the role that fatty acids play in the scheme.  However I thought I'd start off a focus on hyperinsulinemia insulin in terms of hypersecretion vs. reduced insulin sensitivity.  I've adapted Figure 1 from the paper in the picture below.

I believe the caption here is pretty self explanatory.  In the "normal" state, sensitivity to insulin and insulin secretion balance out and control blood sugar (and fatty acid levels as well) in a normal range.  While a lot gets made at times over hypersecreters, etc. it turns out there's a pretty wide range of normal function where insulin production adjusts to accommodate changes in insulin sensitivity, and perhaps vice versa.  The second two figures are quite interesting.  It is known that during puberty and pregnancy, insulin resistance is not only quite common, but is, indeed, "normal".  Looking at "b" we see that the decline in insulin sensitivity in these states is accompanied by increased secretion.  This is a model depicting what should happen.  In many obese, this occurs as well, at least to a certain degree of obesity. 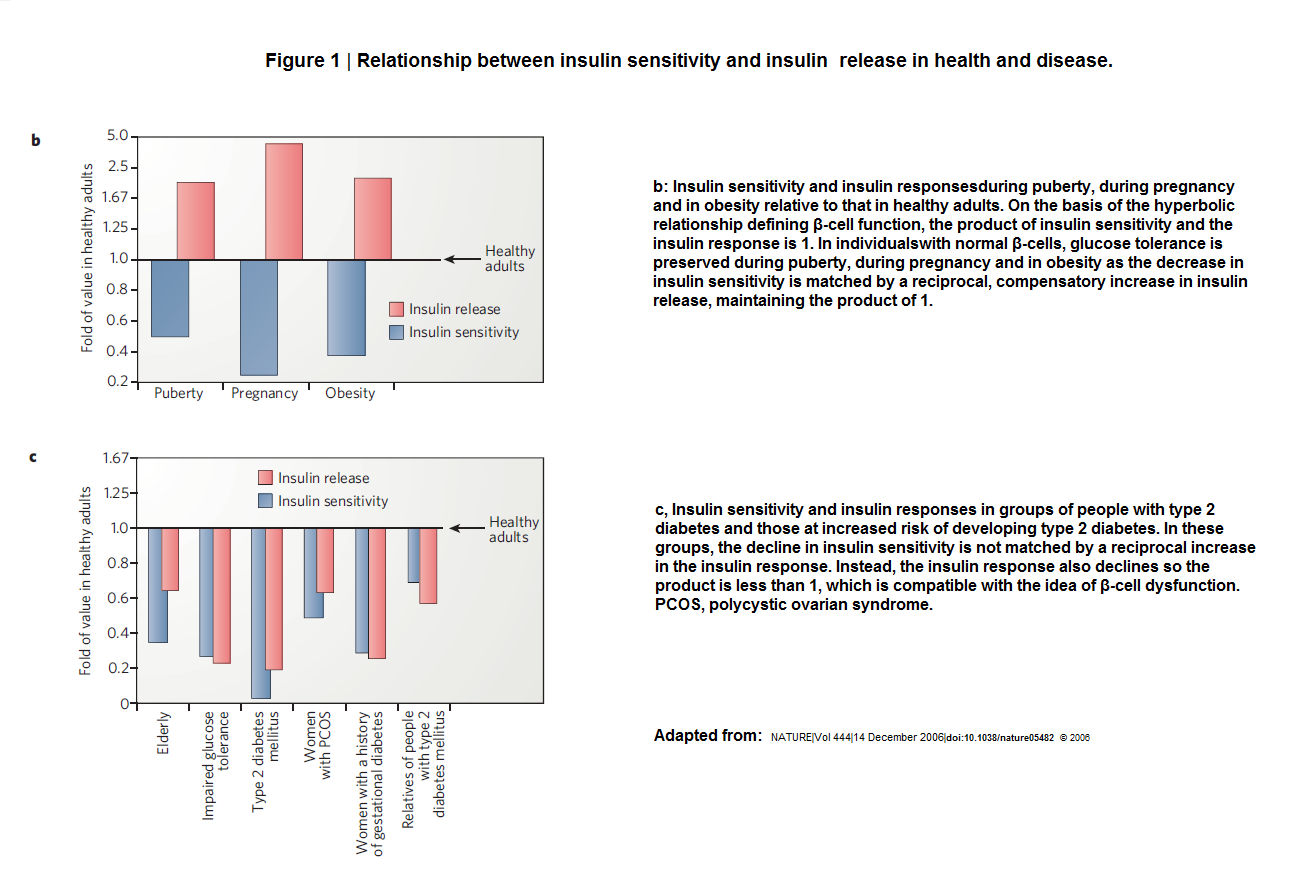 Now look at "c".  It is known that loss of insulin sensitivity accompanies aging.  But now the insulin secretion is not compensatory.   Over this past year I've been blogging on how impaired insulin secretion is likely the primary defect in the etiology of T2 and we see both decreasing here.    Also depicted is PCOS and those with relatives or other family history of T2.

One paradigm shift I'd like to see is one of enhancing insulin sensitivity.  It makes no sense to me to double down on a predisposition.  Without having the chicken-egg discussion, if both insulin secretion and sensitivity are impaired, it doesn't seem logical to do anything that might further impair these.   So I'm hoping to make a number of shorter blog posts looking at these two factors, and a third one being insulin clearance, in this series.  I've got a few papers looking at deliberate weight gain in the normal range of weights vs. the obese and there are some interesting differences in these factors.
Insulin Insulin Resistance Type II Diabetes

charles grashow said…
Do you mean this paper

Stephan Guyenet said…
Steve Kahn (at UW) is the one who originally uncovered that hyperbolic function. I believe he used IVGTT with minimal modeling. Interestingly, Gerald Reaven's work seems to have shown a linear relationship between secretion and sensitivity.
March 14, 2014 at 2:29 PM

DB Product Review said…
You attract an audience and eventually a readership. We enjoy our visit and yours is certainly one of the most interesting websites on the internet!
April 4, 2014 at 2:39 AM