De novo Lipogenesis to Palmitoleic Acid ~ Teaspoon? Might as Well Measure with a Cup!!

This is a minor side thought prompted by the recent Volek saturated fat - turns out to be monounsaturated fat - paper and comments Volek has made to the press.  The same general comments have been repeated in various outlets.  In the study, subjects were first put on a VLC (< 50 g/day) diet (six weeks including half that of "run in") and then carbs were exchanged for fat incrementally every three weeks until the final carb levels were roughly equivalent to starting levels at around 350 g/day.  I'll definitely have something to say about the study itself, but the "major" groundbreaking result of the study was that the levels of the 16 C monounsaturated fatty acid -- that is produced by desaturating the palmitic acid product of de novo lipogenesis -- dropped with carb restriction and gradually came back up as carbs were re-introduced.

An increase in this fatty acid indicates that a growing proportion of carbohydrates is being converted into fat instead of being burned by the body, the researchers said. 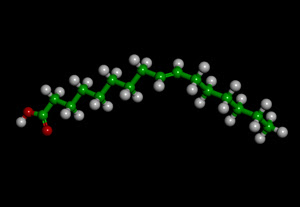 source (though it's been repeated everywhere)

They measured the percentage of various fatty acids in triglycerides (as well as cholesterol esters and phospholipids).  In triglycerides, palmitoleic acid went from a low of 2.59 wt% to a high of 3.89 wt% -- this is a difference of 1.3 percent of the total weight of triglyceride. Triglycerides didn't change from baseline in any statistically significant manner, so let's use the baseline mean concentration of 134 mg/dL -- this works out to 1.34 g/L.  Let's also use 5L as the total blood volume of an average adult human.  Therefore, 1.34 * 5 gives us 6.7 grams of triglyceride in the blood.  [sarcasm] I note that there is more total triglyceride than NEFA ... but we're still in that teaspoon range so ... triglycerides, like glucose, must be TOXIC!!  [/sarcasm]

The subjects in the study were consuming roughly 350 grams of carbohydrate per day when the 3.89% of palmitoleic acid in trigs was measured.

Over 20 years ago, Hellerstein measured the rate of DNL at about 0.5 grams per day when not overfed (calories) but with significant carb load (500g/day).  This was at the expense of roughly 2 grams of carbohydrate.  We know from later work by Hellerstein, that a higher carb diet doesn't significantly increase lipogenesis in normal or mildly hyperlipidemic men (who are also normal to moderately overweight respectively), and that DNL contributes only single digit percents to triglyceride fatty acids.

So even if we make a whole lot of ridiculous assumptions in favor of the DNL, we're talking about a conversion rate of < 0.1% of carb being converted to fat -- which, I would note, is not stored yet.

Given the long standing literature on the topic, the results of Volek and Co's recent study hardly support his ridiculous statements about what fats are stored or burned.  The dishonesty of low carb advocates knows no bounds.