1.  When were the first official Dietary Guidelines released to the American public?

2.  When did the Dietary Guidelines first include the specific recommendation to cut overall dietary fat to 30% of total calories, and saturated fat to 10%? 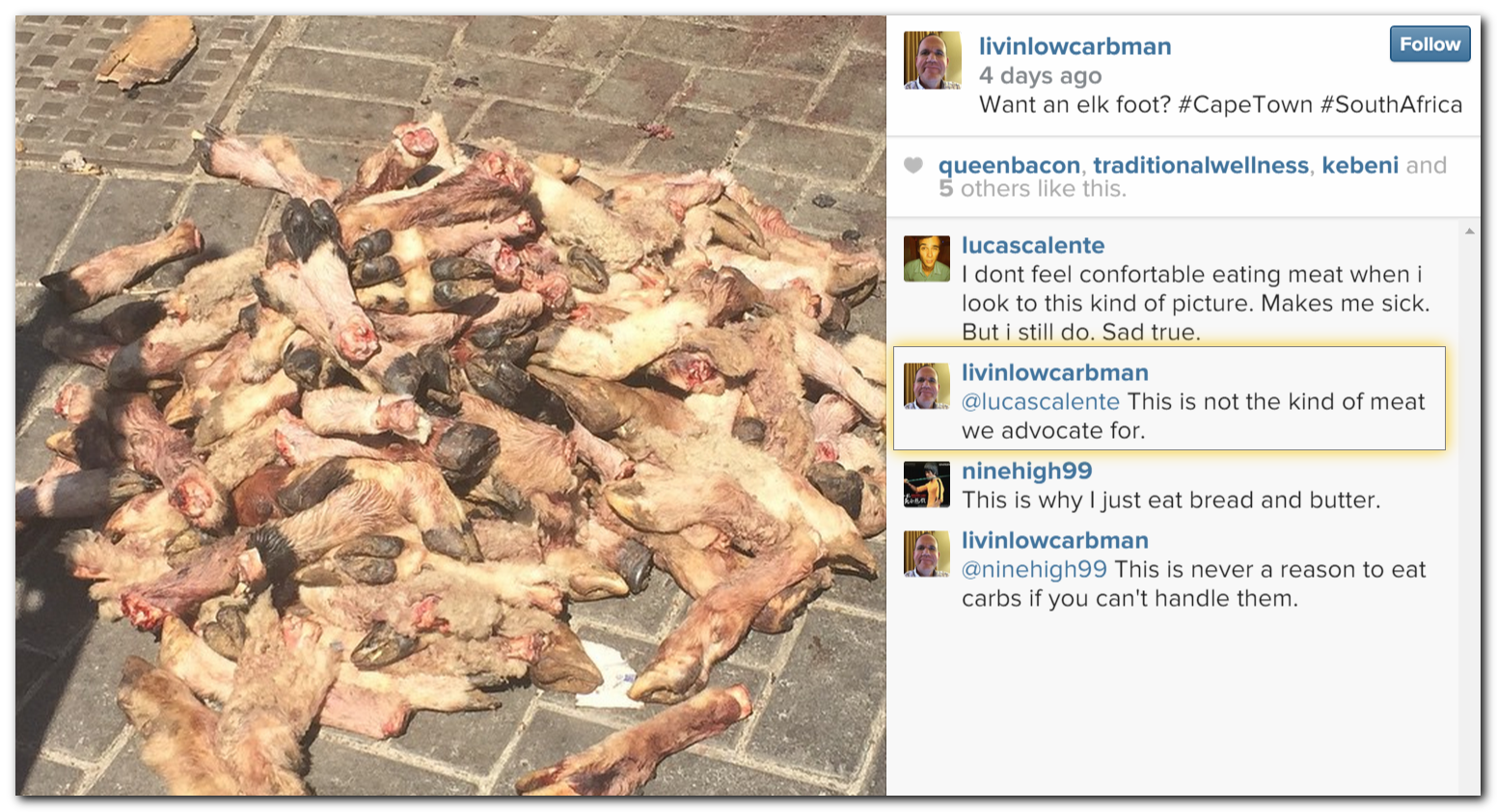 If your answer to Question 1 was 1977, you've been reading too much from Zoe Harcombe.

If you got your Goals and Guidelines straight, but your answer to Question 2 was 1980, you've probably still been reading too much from Zoe Harcombe, perhaps in an "externally peer-reviewed" article that she, someone, or some organization paid £1700 or $3000 USD to publish in the BMJ Group's online journal, Open Heart. 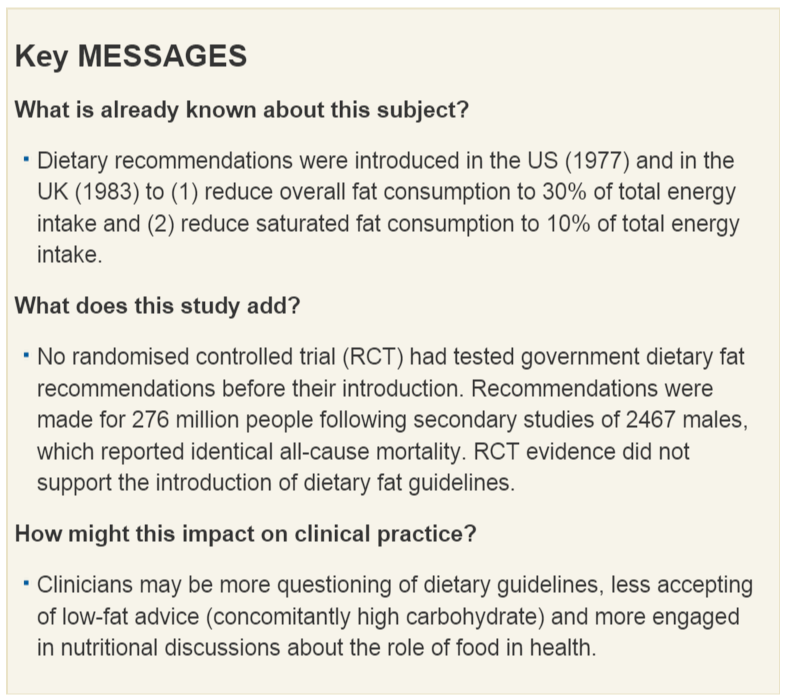 From the press release

National dietary advice on fat consumption issued to millions of US and UK citizens in 1977 and 1983, to cut coronary heart disease incidence, lacked any solid trial evidence to back it up, and “should not have been introduced,” concludes research published in the online journal Open Heart.

I do not know, nor really care (it's not my country) what the UK timeline is on this, but I do know that this article requires further correction on more than just the competing interest line.

Dietary Goals vs. Dietary Guidelines ~ In the Beginning

Some names have changed since then, but the predecessor of the current Dietary Guidelines Advisory Committee (DGAC) was McGovern's Select Committee on Nutrition and Human Needs.  In 1977, they issued Dietary Goals for The United States.  It wasn't until 1980 that the Dietary Guidelines were issued to the American people via the USDA and HHS.  For anyone interested, there's a brief history on events leading up to the formation of the current DGAC.   Below, I've screen-capped from each. 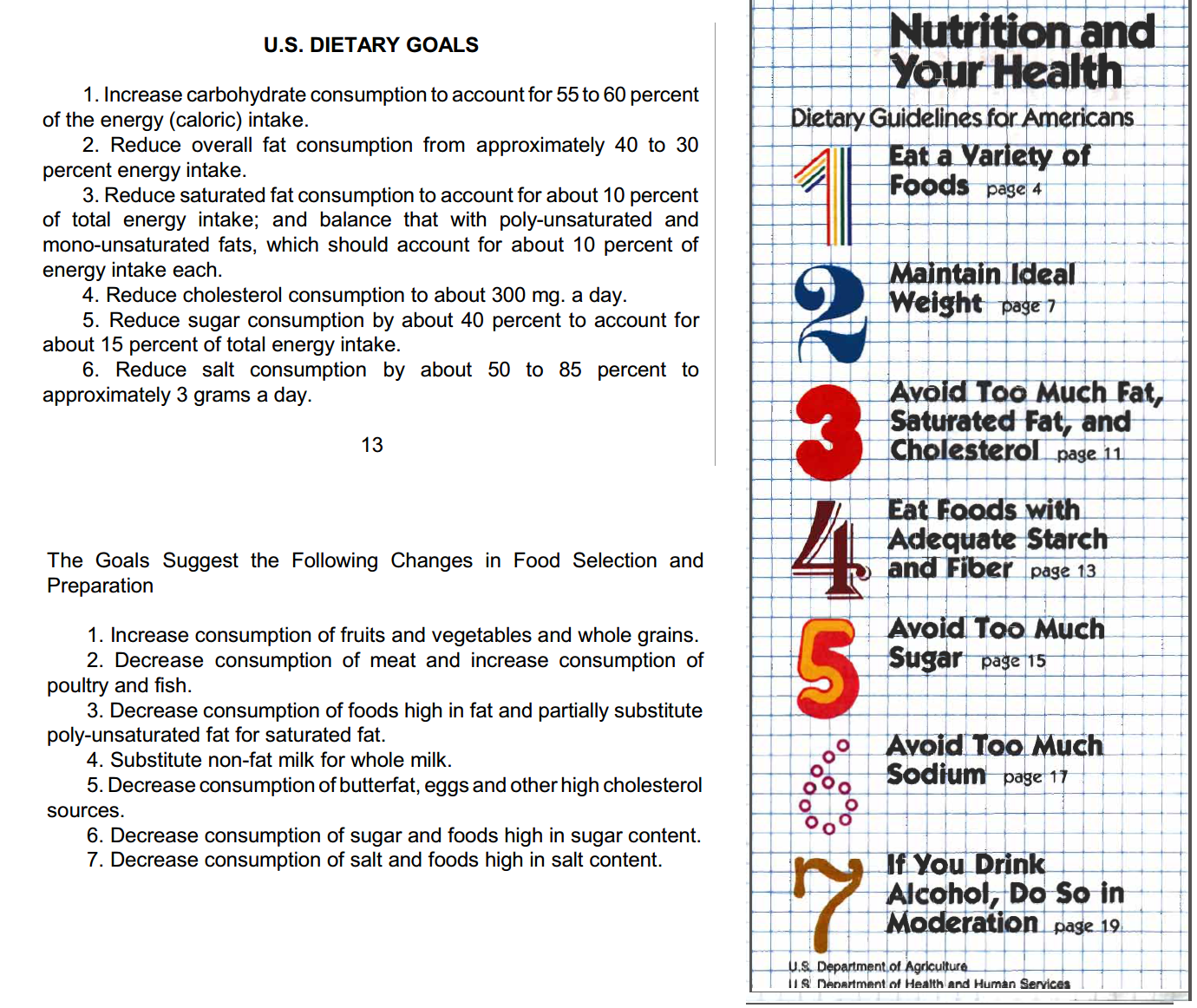 Notice anything?   Those Goals were apparently too draconian for the various food industry interests.  These not only included, but were led by "Big Beef" (you might find Mark Hegsted's version of events interesting. )  To use the words "watered down" to describe the eventual Guidelines would be a serious understatement in my opinion.

Reduce fat from 40% to 30% was reduced to (pun intended) "avoid too much".  Ditto the call to reduce sugar consumption by about 40% down to only 15% of energy intake ... also watered down to "avoid too much".

But perhaps the wording was more strong on page 11?  That's just a summary list you have there! 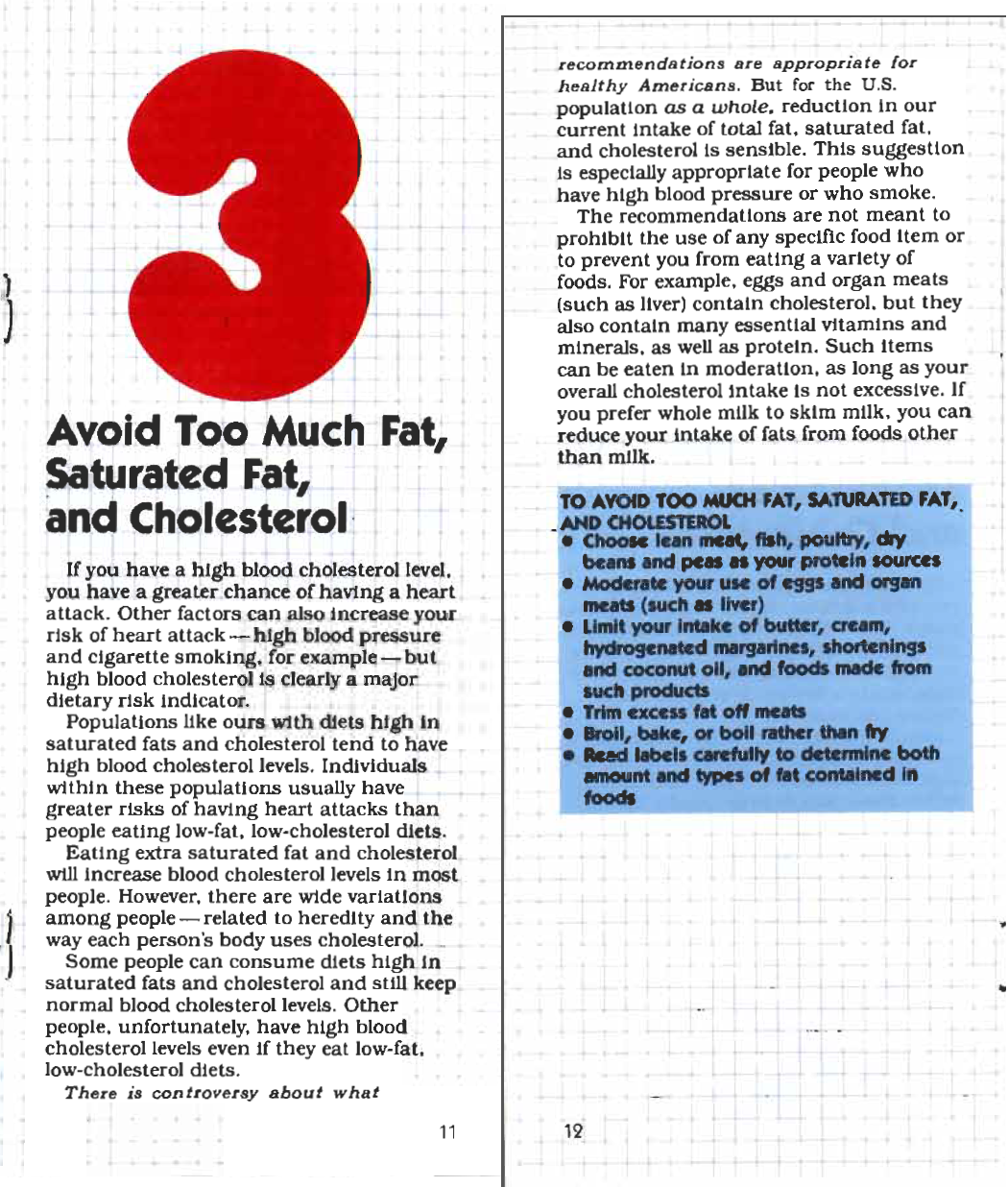 For those who prefer text, I'm going to transcribe just one section from this:


There is controversy about what recommendations are appropriate for healthy Americans.  But for the U.S. population as a whole, reduction in our current intake of total fat, saturated fat, and cholesterol is sensible.  This suggestion is especially appropriate for people who have high blood pressure or who smoke.

I know.  How DARE they tell every last man, woman and child in America to eat a low fat diet when no randomized clinical trials had ever tested such an abberation.  And I just know you're going to find this hilarious (or at least funny, at least I hope you do!).  Over on Marion Nestle's blog (the comments are illuminating in so many ways), Adele Hite actually made a stink out of the term "modest" being morally charged!

I had the above commentary from the actual Guidelines in mind when making my first comment.  Anyone who thinks that the recommendations are in any way extreme has fallen victim to the misinformation campaigns of the anti camp.   Again, we need to leave aside the question of whether or not our government ought to be in the business of making such recommendations -- it clouds and distracts from the discussion of what those recommendations actually are.   The guidelines are necessarily for the population as a whole, and are not -- and cannot be -- intended to apply to each and every individual.  This is made pretty clear in the guidelines themselves! 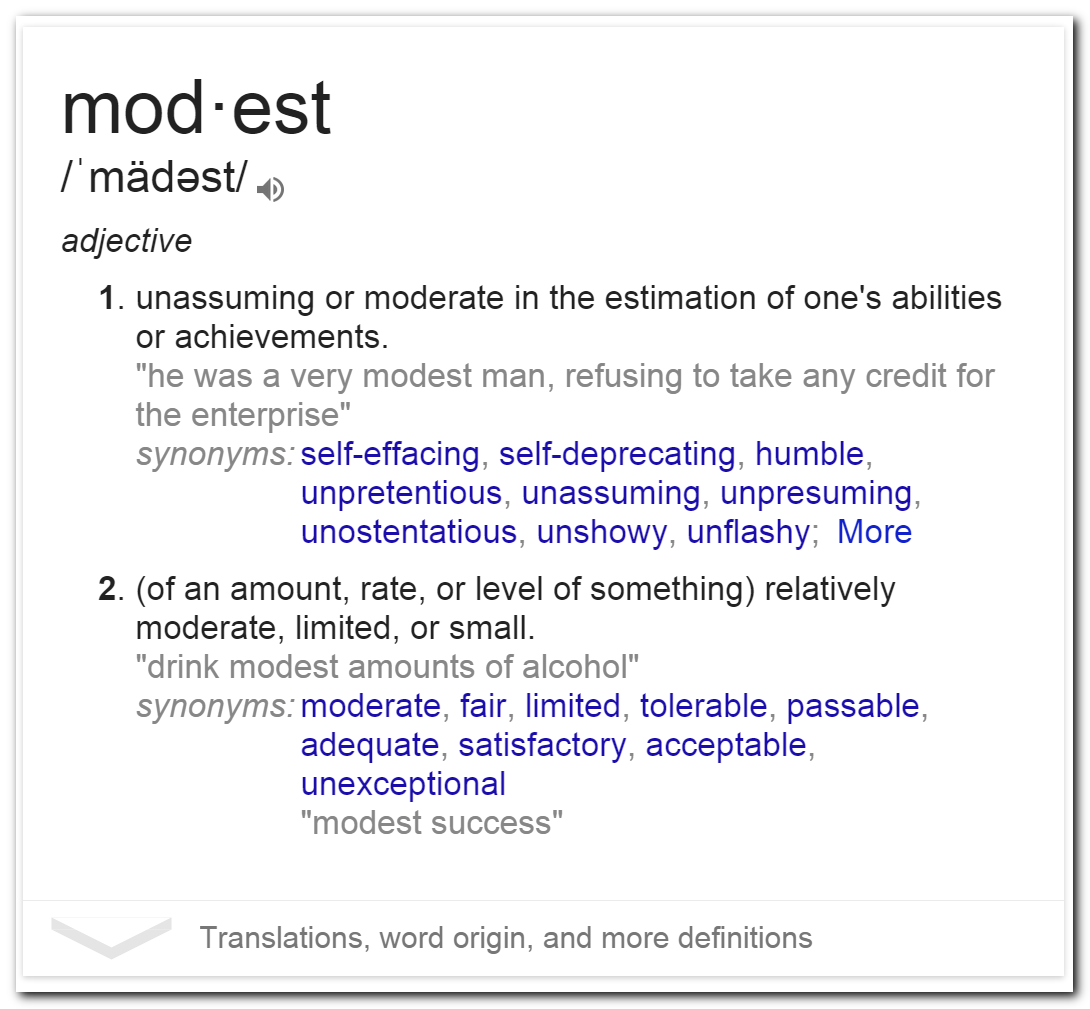 As to the term modest, I would hope that someone who has now changed their PhD studies from Nutritional Epidemiology to Communication, Rhetoric, and Digital Media (per her statements on Nestle's blog) is aware that it can be used in more than one context!

Sugar vs. Fat ~ The False Dichotomy!


Speaking of modest, though, I decided to insert a separate little section on this false idea that somehow our government has given sugar a pass all of these years.   Let's harken back to the pertinent 1977 Goals:

5.  Reduce sugar consumption by about 40 percent to account for about 15% of total energy intake.

For those who want to play percentage of percentage math games, here we go:

The proposed Goal for sugar was considerably more drastic than the modest one (Adele, don't get the vapors) for fat.

Here are the front and back pages of the 1990 Dietary Guidelines. 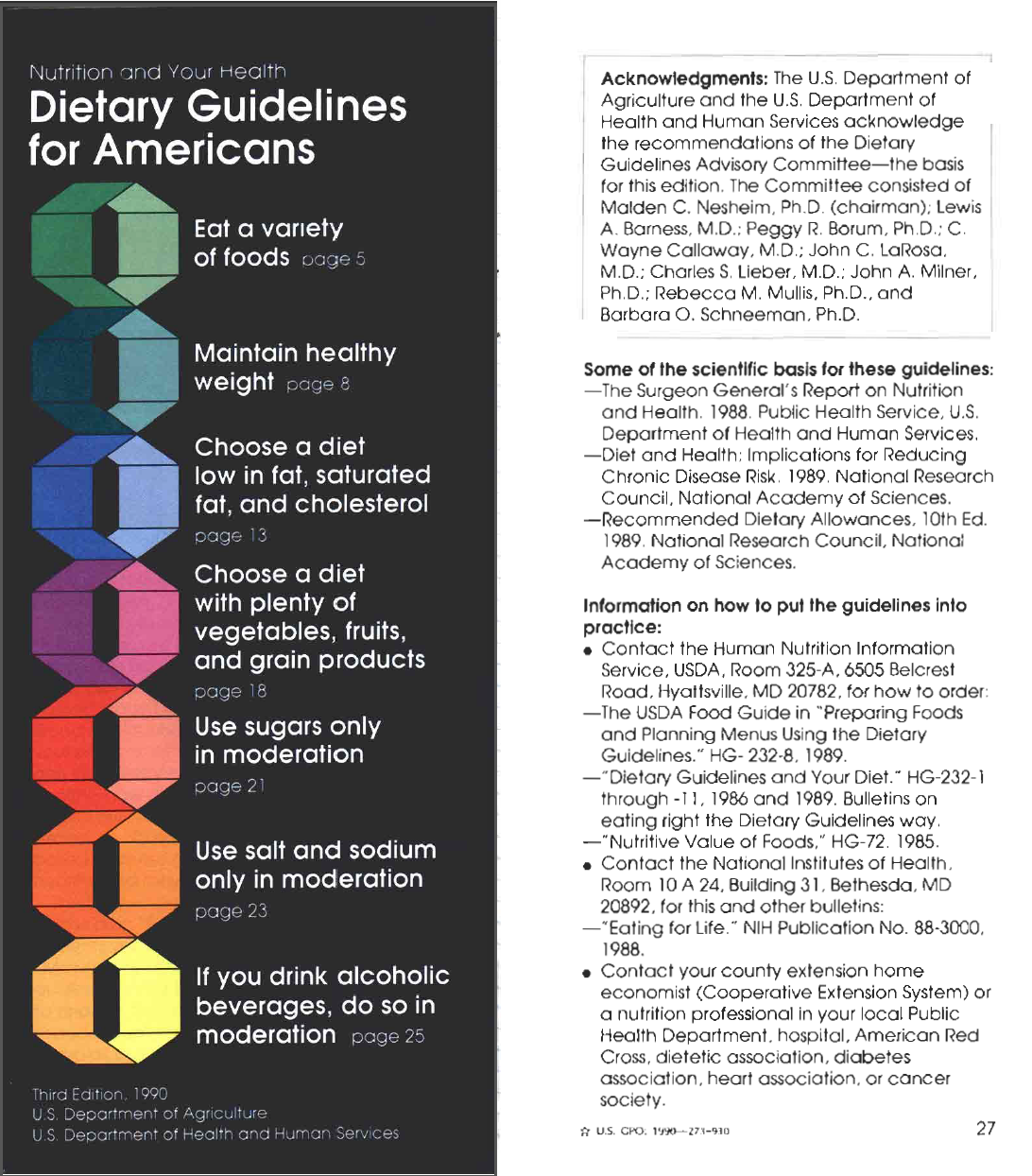 Before discussing these ever so briefly, I wish to point out that THIS version of the Guidelines was informed by more than just the DGAC.  And that second listed additional reference, is no mere pamphlet.   It's even bigger than Good Calories, Bad Calories and The Big Fat Surprise combined!!!  Do you think Zoe Harcombe "researched" this? As you may know, I don't own many hard copy mass media books, but a friend did send me a copy of NuSI Advisory Board Member and Philanthropist/Fund Raiser Tim Ferriss' 4 Hour Body.  So I snapped a pic of the two for size reference as Tim's book makes a pretty good door stop.    Oh ... and as far as size goes, we're not talking tons of graphics, large font and spacing in D&H, though there are copious pages of references of actual studies cited by lead author in the text, and listed alphabetically for ease of use at the end of each chapter.  Chapter 7, Fats and Other Lipids runs from p. 159 through 230, and is followed by references (about 35 per page) from p. 231 to the top of 258.  There's another shorter chapter devoted specifically to heart disease.  Ahh but Zoe Harcombe is doing a PhD on Macronutrient Confusion!  Give me a break.

So here is the sum total of the advice on fat that was doled out in 1990 that has made us all fat and sick: 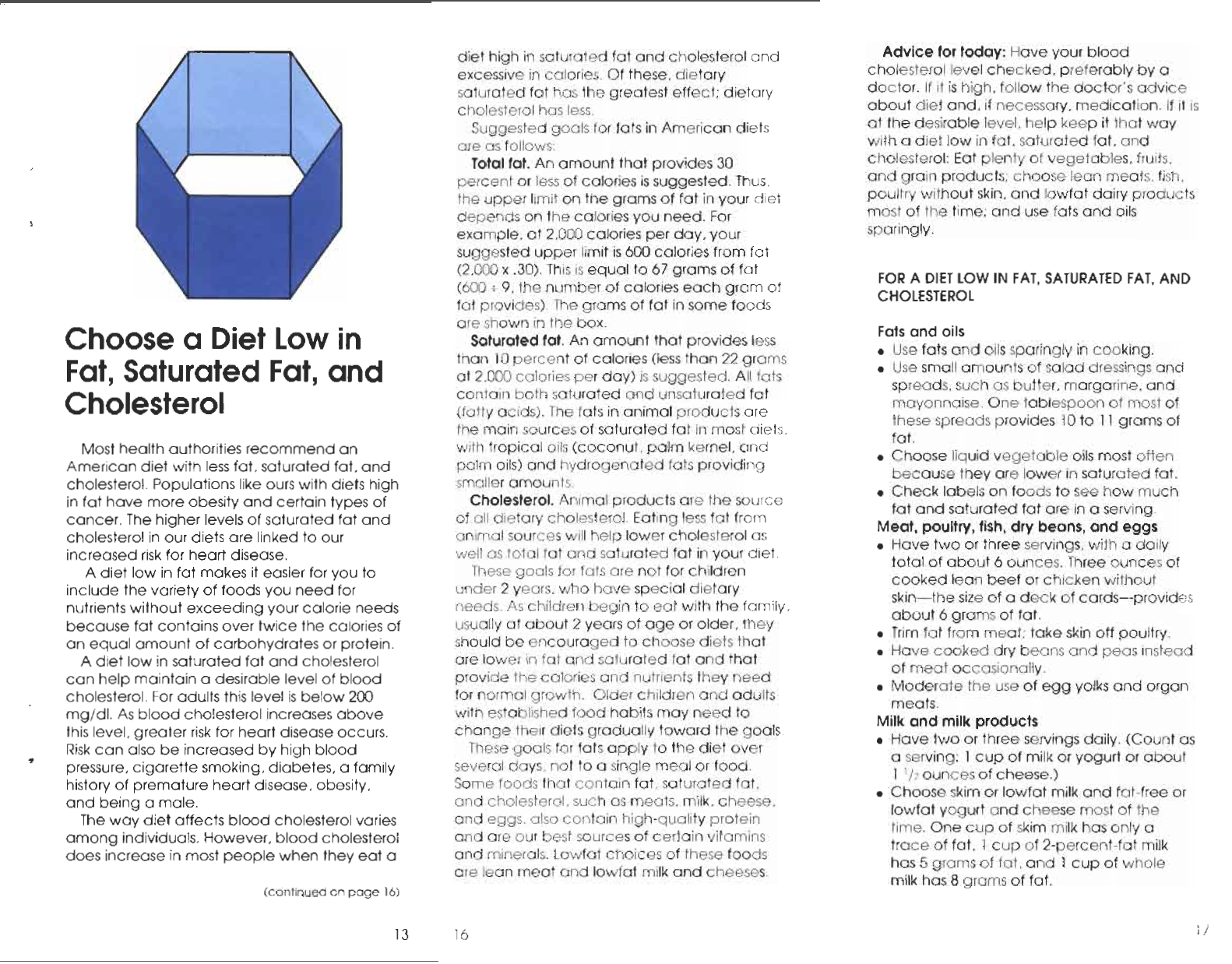 So nothing in 1990 was all that groundbreaking anyway, although they managed to finally "codify" the  1977 Dietary Goals for fats in the 1990 Guidelines.  It appears they never got in the ambitious advice for sugars.  But here you go. 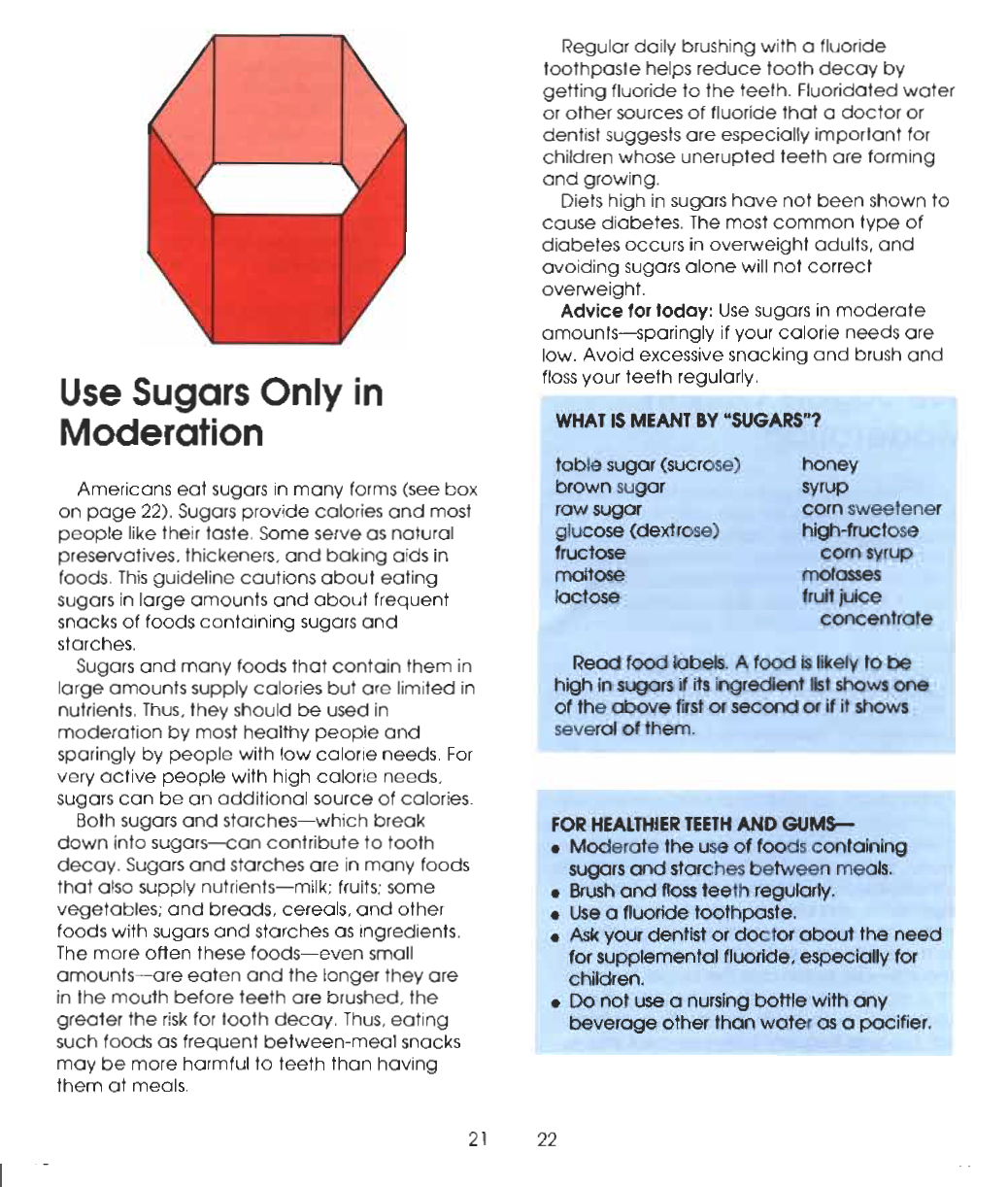 I am shocked, I tell ya, that all of the anti-sugar crowd are not jumping for joy over the sugar recommendations coming out of the 2015 DGAC!  A reduction to 10%?!  Surely Americans will be jumping right on that bandwagon ;-)  Dutifully, obedient, compliant bunch that we are ...

charles grashow said…
But I though organ meats were all the rage? The most nutritionally dense food there is is liver - per the paleo people.

Sheila Kealey said…
Excellent information and presenting the actual guidelines will hopefully be enlightening for some. Thanks for putting this together Evelyn!
March 1, 2015 at 4:10 PM

The 30-day worm and cricket diet


A US student has just spent 30 days on a "bug diet" - eating insects three times a day. Camren Brantley-Rios says traditional meats such as pork and beef are unsustainable - and he wanted to try out what many consider the diet of the future.
March 1, 2015 at 4:47 PM

charles grashow said…
http://scepticalnutritionist.com.au/?p=1816
Modern Diet Myth No. 5: The low fat diet was the result of fraud and conspiracy
March 1, 2015 at 5:17 PM

Nutrivorous said…
What does he mean 'this isn't the kind of meat we advocate for'? Wild-caught, free-range, grass-fed game meat with lots of bone and connective tissue? It would be perfect for making bone broth.
March 1, 2015 at 7:22 PM

Nutrivorous said…
I personally don't trust anyone "concerned" about pork and beef being "unsustainable" who isn't willing to eat worms and crickets. You can raise bugs by feeding them refuse, thus saving landfill space and providing food at the same time.

Of course, you can do the same thing with pigs and cows, but the landlady in your apartment complex might object.
March 1, 2015 at 10:09 PM

2lbs of Starch said…
The Insect Diet works because it lowers insulin spikes. That's also why the Catfood Diet works.
March 2, 2015 at 2:32 AM

Kitty said…
"There is never a reason to eat carbs if you can't handle them."


What human can't handle carbs? My obligate carnivore cat can even handle a few carbs (he loves carrots). So, if you have fatigue, malaise, constipation, insomnia, muscle cramps, heart palpitations, weight gain or any of a hundred other symptoms of a ketogenic diet, that is still no reason to eat carbs? It's officially a cult.
March 3, 2015 at 11:56 AM

Nutrivorous said…
If you experience fatigue, malaise, constipation, insomnia, muscle cramps, heart palpitations, weight gain or any of a hundred other symptoms on a low carb diet, you may use one of the following explanations:

* There are hidden sources of carbs in the foods you've been eating. For example, the box the food was shipped in.

* An animal you've eaten had eaten a carbohydrate-rich food during its lifetime. For example, grass.
* Your body is now so highly tuned to the detrimental effect of carbohydrates that even the mere whiff of a stalk of broccoli is enough to spike your blood sugar.
* You cheated on your diet a few weeks back and now you are paying the consequences.
* Your metabolism is now broken from all those years of eating carbs.
* The symptoms are signs that the toxins are leaving your body.
March 3, 2015 at 2:58 PM

StellaBarbone said…
* This diet isn't a quick fix like chemical medicines, it takes time to work.
* You don't really want this diet to work.
* The food that you are choosing is contaminated with pesticides, herbicides, GMOs, and pollution and the fields where it has been grown have been stripped of minerals by years of bad farming.
* You need to purchase the following supplements which, conveniently, I'm able to sell you for a low, low price (given their extremely high quality)
March 3, 2015 at 4:26 PM

Nutrivorous said…
* Even if you don't achieve weight loss or get adequate sleep or poop on a regular basis, the increases in cognitive focus and enhanced mental clarity are so... so... what's the word I'm looking for?

LWC said…
I am reading the book The Low Carb Myth by Ari Whitten and Wade Smith, MD. Have you heard of it, Carbsane? This bog is mentioned (favorably) in it as a source of good nutritional science about low carb diets. I learned of it at the Critical MAS blog, and downloaded for free during a promotion. I'm not suggesting it to you as reading material, as there's little in it that you won't already know. However, the book includes an explanation of the hierarchy of scientific evidence, and it made me wonder how many of Teicholz's sources would fall near the bottom of the hierarchy. That is, of course, a separate issue from her seeming inability to read and comprehend the sources that she cites.
March 4, 2015 at 9:42 AM

why should she care, since she can make all levels of the hierarchy say what she wants - ie, put made up cr*p in journals and researchers's mouths?
March 4, 2015 at 6:02 PM

carbsane said…
Yes I'm familiar with Ari's book. I provided some fact checking assistance with the manuscript, and he really made the extra effort to make sure his points were accurate. There may be wiggle room on some issues where we don't see exactly eye to eye, but I like Ari and what he did with that book!
March 4, 2015 at 9:00 PM