For today.  Just thoughts.  No references.  Also I will use the term theory, it sounds better, and frankly in the semantics of scientific progression, we've been there for a while now with Adiposopathy (I'll capitalize it for emphasis) anyway.


Since offhandedly throwing out the term Adiposopathy in response to a query as to what I consider to be the cause of CVD/diabetes, etc.  -- collectively known as "metabolic diseases" and sometimes "chronic diseases" -- there's been one question raised a few times:  How and/or why do fat cells get "sick".  I think I found the perfect illustration ... take it away Lucy and Ethel ...

Before moving on, I need to make a few clarifications and distinctions.   First of all, Adiposopathy is not a theory about what causes obesity.  Too many calories in and/or insufficient calories out is the cause of obesity.  The list is long as to those factors contributing to terms on either or both sides of the energy balance equation.  In truth, for 90% of the overweight and obese, it's likely some combination dominated by a few factors.  This is probably the best graphic I've seen in a long while to summarize this. 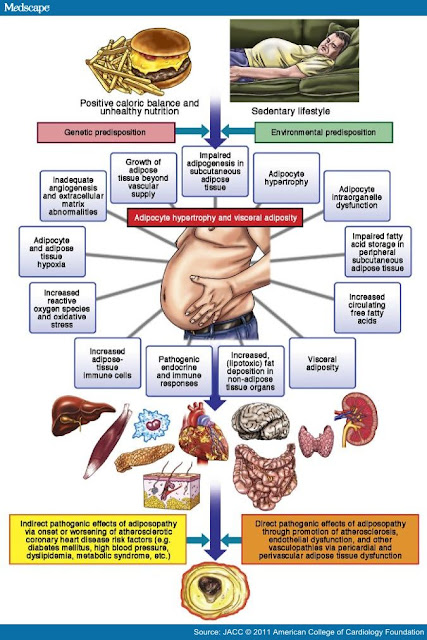 Inflammation and metabolic dysfunction are the result of obesity -- in some cases more than others, highly varied and individual -- not the cause.  And by dysfunction I mean values far outside the normal range and I'm excluding relatively rare genetic "defects" (and I'm not talking about genetic abnormalities that invariably result in obesity -- of which there are some (e.g. ob/ob mice) in animal models, but only very rare possibilities in humans, especially if you apply a true "invariable" threshold.)

Adiposopathy is about how the metabolic cascade that manifests itself in CVD and diabetes, amongst other diseases, originates in the fat tissue.

Thus it explains the relationship between obesity and these diseases.  It also, as it turns out, explains how a lack of sufficient adipose tissue (lipodystrophy), and even "skinny fat"  (aka metabolically obese thin people) people develop these conditions as well.

The term sick fat, as I'll use it, relates to both the fat cells themselves, and the fat tissue as a whole.  Contrary to popular belief we don't have some fixed number of immortal fat cells in our bodies that expand and shrink like the balance in a bank account.  There is turnover of the fat cells and as more storage space is needed, this is accommodated by a combination of new fat cells differentiated from preadipocytes and expansion of existing fat cells.  Larger and older fat cells appear to be less capable of handling the metabolic traffic compared with smaller and younger ones.  Dysfunction begins the cascade within the fat tissue itself such that macrophages initially show up to clean up minor spills and leaks, and are eventually recruited in larger numbers as the condition worsens.  Here's a pretty good graphic of this. 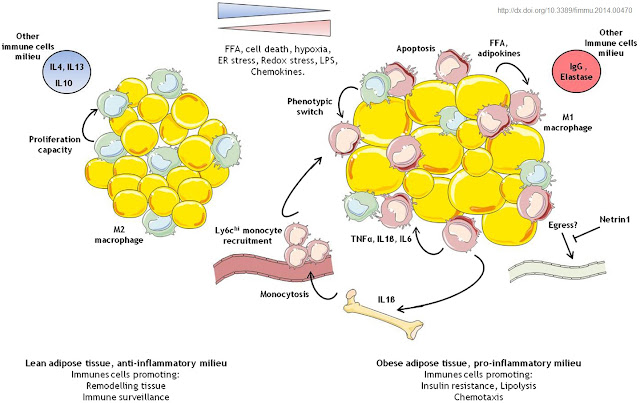 As can be seen in both this and the previous graphic, the "sick fat":

Revisiting the The "CAF Rat Study":  aka Occam's Razor

I'm going to have to once again thank Beth of Weight Maven (who hasn't blogged in awhile but definitely has some archives to check out!) for bringing this to my attention.  It made a little splash in the IHC, more like a single dripping noise, and then pretty much nobody cares.  Why?  Because this study doesn't fit into any of their wild-hypotheses-stated-as-fact thought processes such as what I call TWICHOO (Taubes Wrong Insulin Carbohydrate Hypothesis Of Obesity)

Study:  Cafeteria Diet Is a Robust Model of Human Metabolic Syndrome With Liver and Adipose Inflammation: Comparison to High-Fat Diet

I've created two summary graphics for the study so you don't have to flip through old posts to get the gists.  Basically they fed normal rats on three different rodent chows and a "cafeteria diet" consisting of ad libitum access to standard rodent chow and a rotating assortment of human "junk foods".

The high points here are that standard rodent chow (SC)  is usually a mix of grains, animal and veggie proteins, and added fat with lard and soybean oil being the most common fats used.  Diets that induce obesity (DIO) are usually high fat (HFD), and often contain refined ingredients such as casein protein, cornstarch and sugar.  To control for that, a "LFD" was also used that essentially matched the refined ingredient composition of the HFD with the SC macro ratios.  This LFD could equally have been called a high sucrose diet at 35%.  The bottom table shows the various junk foods that the rats were given rotating access to. Surprise, surprise, the rats so much preferred these to their chow they only ate about 15% of their calories in chow.  The resulting composition of the CAF diet was almost the same in fat content as the HFD (~45%),  a little higher in carb than the SC or LF, and lower in protein than all the chows.

Perhaps surprisingly, the caloric intake for the three chows was similar, although HFD rats ate slightly fewer calories.   The CAF rats consumed 30% more calories.   The  HFD and LFD rats gained more weight than the SC -- which can be accounted for by the refined nature of the diet (efficiency) -- but the CAF rats became truly obese.   Here is a summary graphic for the weight and fat tissue morphology. 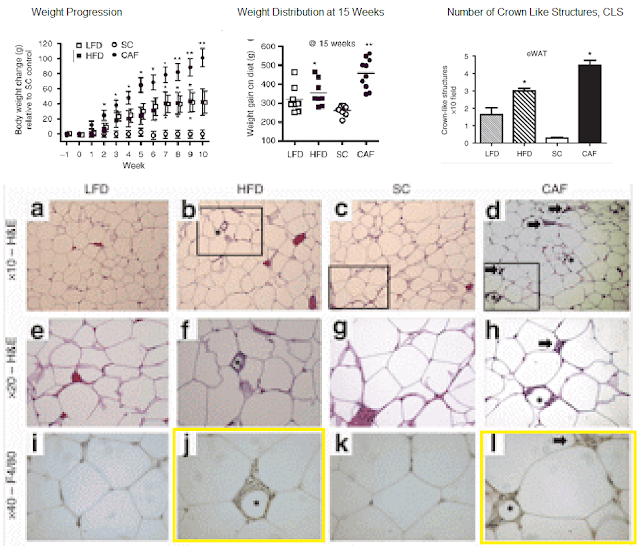 How and Why Does Fat Get Sick?

The micrograph images of fat tissue demonstrate what sick fat looks like.  I've highlighted "j" = HFD and "l" = CAF as both show a typical "crown-like structure (CLS):  a macrophage (the dot in the center is an indicating asterix, not part of the image).

Clearly the high fat diet is more "sickening".  Note that my "caption" is derived from that of the figure in the study itself.   I didn't re-read the paper to see if the researchers noted this, but I believe these are densities per area of 2D slices.   This means that since the CAF rats have a lot more fat, the number of CLS in the total animal is likely greater still.  Body composition isn't provided, but the slightly greater mass of the HFD vs. LFD, and the fact that HFDs usually produce fattier rodents when it has been measured, would lead one to believe that the factor is greater than the two-fold as well.

This is not to mitigate the observation of the LFD vs. the also LF SC.  Surely 35% sucrose in an otherwise refined diet leads to some increased adiposity and inflammation.  Also the liver doesn't look too good.  Lesson:  don't eat a diet of over one third pure sugar!  But the HFD fat is clearly sicker than the LFD, and considerably sicker than the SC (I'd guesstimate 10X) while these rats actually consumed slightly less than either the LFD or SC rats (~15% less).

Compared to the 7.7g of fat consumed weekly by both the LFD and SD rats,
It seems quite reasonable that heavier, mostly postprandial (after meal), "fatty acid trafficking" is the reason.      It also appears that once set in motion, absent corrective action, this inflammatory cascade is self reinforcing and perpetuating.

I plan a summary post of how this starts mechanistically on the adipocyte level.   I don't even think it is necessary to understand, but I do find it interesting.  You can just scroll back up and rewatch Lucy.

As regards this idea that adipose tissue expansion occurs to compensate for excessive iron consumption and remove iron from circulation by sequestering it in fat tissue:  There's no evidence supporting this, nor is there any plausible mechanism by which such would occur.  This would require overeating or some compensatory (and rather considerable) down regulation of metabolic rate.   Fatty acids don't just get trapped and sequestered in the face of caloric deficit even if you're stupid enough to eat a calorie controlled version of the LFD from this study.   Note that overeating did not occur on either of the two purified chows regardless of fat or sugar content.

Purified chows have mineral fortification including iron, manganese and copper.  I'm unable to quickly find/compare these chows, nor am I motivated to.  If anyone has the time and desire, I've provided the exact designations and manufacturers for the chows and these can probably be easily found either online or by a call to the manufacturer.    It seems unlikely looking at the array of human junk (and the proportions that the rats must have consumed to achieve 44% fat) that we're talking a large amount of iron enriched flour that exceeds that in the fortified chows -- rather it's possible there's less.  There is ample evidence that a HFD decreases iron absorption and thus dietary iron excess is unlikely to be involved.  It almost certainly is not here.

If a large number of rats were fed a CAF diet such as in this study, it is quite plausible that iron overload in the adipose tissue is found.  I'm also reasonably sure, based on what I've read on the topic -- already a considerable amount -- this is due to the macrophage recruitment with a secondary factor being hepcidin production in "sick fat".    An explanation for the human "MetSyn phenotype" for iron overload that is consistent with a theory supported by an inordinate amount of quality research.