I've been poking around some eating disorder research recently due to the recent Elizabeth Licorish-Tara Lipinski kerfuffle (see also the follow-up).

But something else, that's seemingly always a hot topic when calories are discussed, is this concept of metabolic adaptation.  Quite often this gets referred to as having a "damaged metabolism".   I'm just going to use that term (and w/o quotes), and don't mean to imply that it is necessarily appropriate or justified, just that it's easier than explaining it repeatedly.  The damaged metabolism is thought to develop from frequent, chronic, and/or severe calorie restriction.  The mechanism is that the body down-regulates basal metabolic rate such that a 150 lb person who has dieted down from 250 lbs will require fewer calories to maintain that weight compared with a person whose normal, stable weight is 150 lbs.

So I was looking for some additional references about the "hamster wheel" (increased activity in anorexia, to be blogged on eventually as well) and energy expenditure, and came across this study from 1977:   Weight gain, thermic effect of glucose and resting metabolic rate during recovery from anorexia nervosa.


The opening sentence was interesting from a Carb-Sane Asylum point of view:

Anorexia nervosa is a condition in which severe voluntary restriction of carbohydrate intake, and in some cases restriction of consumption of all foods, results in weight loss.

I guess this is evidence that Gary Taubes was right after all, everyone knew it was carbohydrate that made you fat before the 1977 Committee turned the spotlight onto fat.   Ahhh, but not so fast, because anorectics in the 80's became generally fat phobic -- primarily because of calories -- and there has been no indication that "success" rates for becoming anorexic declined as a result. [/snarkasm] , please forgive, I know this is a serious subject.

Onward to the study!

Frequently, the anorectic is previously obese and, in this case, it is clinically expedient to be able to predict, and control, the rate of weight gain in order to give the patient confidence that she will not, once more, become overweight.

I'm not sure how frequently truly obese people develop anorexia.  In my reading, I've found that most of the accounts of anorectics -- for example in books like Hilde Bruch's The Golden Cage --  tend to begin as normal to slightly overweight individuals.   And yet it is interesting that severe calorie restriction (often accompanied by excessive exercise) is a "successful" formula for becoming extremely underweight regardless of starting point.  If all of the metabolic adaptations and such we are told and warned about truly conspired to prevent weight loss past a certain point, this should not be the case.

I would note that the researchers defined previously obese as weighting 20+% over ideal weight prior to onset of anorexia.  Even taking the highest target refeed weight for these subjects of 60 kg, that equates to 132 lbs.  Worst case scenario, then, would make weighing 158 lbs or more their definition of obese.  Whether this may meet some technical threshold, even 30 lbs overweight is not what many are dealing with when we're talking obesity and weight loss.   So let's keep that in perspective as we're not provided any information as to how overweight or obese these eight subjects were.  Continuing ...

The purpose of this study was to investigate some of the phenomena that may be related to the rate of weight gain, especially in the light of recent reports (3-6) that there is an increase in the thermic effect of a meal in infants recovering from malnutrition and that when the recovery growth is most rapid the postprandial metabolic rate is greatest.

There are a lot of books and programs out there for fixing your metabolism, recovering from dieting, or so-called reverse dieting, that either rely heavily on, or are entirely based on anorexia recovery research ... like this study.   In my opinion, it is irresponsible of many authors to cite such research without stressing the unique situation of the established anorexic:
Important because weight gain is to re-establish normalcy from a state of deficiency.  Employing the same strategies starting from normalcy or surplus makes no sense at best, or can be detrimental at worst.
Such a body is likely to react differently to refeeding than, say, that of a 150 lb person who has dieted down from 250 lbs.  And yet, in-patient "recovery" from anorexia can be fairly predictably achieved.  Notice the quotes there, as recovery from this disorder involves far more than re-establishing a normal weight for stature.

This study involved 15 hospitalized patients with varying degrees of anorexia, you can view the details yourself as my link is to the full text.  The underweight subjects were re-fed during a period of "complete bedrest".  The refeed diets were the same for all subjects, calories averaged 2800/day (2500-3000 range) of roughly 14% protein, 36% fat and 50% carbohydrate. 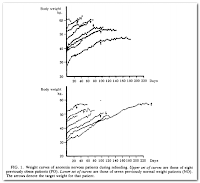 One interest of the researchers, was whether or not the rates of regain were different between those subjects who were previously obese (PO) and those who were not (NO).  The subjects were refed and were weighed periodically.  The weight gain trajectories are plotted for individual subjects which gives us a much better idea of what is going on than any means.  The small image (as always click to enlarge) is the full plot from the study with the PO on top/bold and NO on the bottom.  What caught my eye was the slopes of the curves which appear to be similar both within each plot and between them.  So I overlayed the two, shown below. 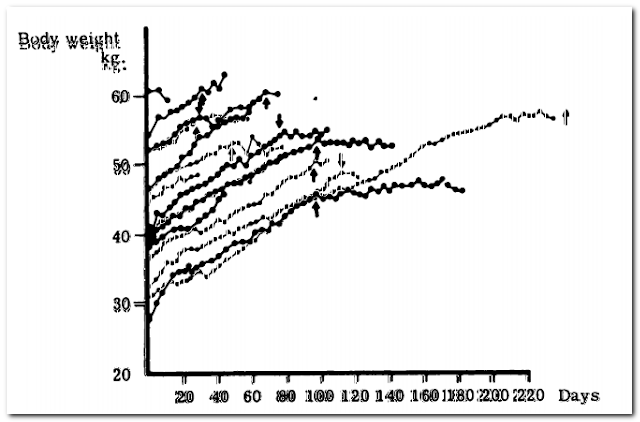 There really does not appear to be any pattern of difference in the regain trajectories.   However working with averages, the researchers noted greater weight gain in each of the 10 day periods (first 10, second 10, last 10 before reaching target) in the PO vs. the NO groups though differences in these intervals did not rise to the level of statistical significance.  Over the full refeed period, the PO averaged gains of 187 g/day (0.412 lb/day) vs. NO averaging 148 g/day (0.326 lb/day), which was statistically significant to p= 0.01.     I'm not sure how much I put into these averages or differences between them due to the small sample size (15 subjects, 8 PO, 7 NO) and variation in time of admission, degree of underweight, etc.

It is necessary to consider three possible reasons why the previously obese anorectic patients gained weight more quickly than the previously nonobese patients.

1. They ate more food.
2. They had lower metabolic rates throughout the day.
3. They had a lower thermic response to food.

It is possible, but because of the strict supervision of the patients, unlikely, that the PO patients ate more food than the NO. It is impossible to compare directly the gross energy expenditure (kcals/h) of the two groups because they were not identical nor were they matched for degree of emaciation when the measurements were made.

As you can see, reason #1 was ruled out due to it being a metabolic ward study, but since intake wasn't standardized to starting weight, weight deficit or energy expenditure, it makes any weight-gain-per-surplus-calorie measure impossible.  So they measured both resting energy expenditure and  thermic response to a 100 gram glucose load to investigate reasons #2 & #3.

The analysis of resting metabolic rates was accomplished by dividing the subjects into two "treatment" groups:
Subjects ate breakfast (time not specified) then fasted until 1pm.  The results from Early to Late treatment, in anorectics
Although the premeal metabolic rate of the late treatment group as a whole was lower (P < 0.001) than that of the control group - both in gross terms and when related to surface area - there was no significant difference between the premeal metabolic rate of the late treatment NO group and the controls.  Oddly, nothing more said about PO group but if all late treatment averaged lower, and there was no difference between the NO subset, this implies that the PO subset had lower pre-meal RMR.  Significant?  Guessing not.


In other words:  no lingering metabolic damage in the anorexics who began at a normal weight.

It should be noted that these RMRs were not what is usually measured, which is at rest in the morning before eating or drinking anything.  Thus, as noted by the researchers, are not directly comparable to this measure that they designate as BMR.  Comparing the pre-meal RMRs to BMRs reported in a study of a most similar population:
As regards the initial state of the anorexics metabolic rate, from the discussion:
They then compare this to Ancel Keys' infamous Minnesota Starvation Experiment where he saw roughly 40% reduced metabolic rate in his intentionally starved men, roughly 30% when adjusted for surface area, and a 20/80 split for surface area vs. adaptation accounting.  In addition to possible gender differences, some other factors might be in play here such as more consistent deficit in MSE, length of restriction in anorexia, etc.

Looking at just the 5 recently admitted patients, 2 PO, 3 NO
From this the reduction in RMR vs. BMR standards for newly admitted anorectics was roughly 50:50 surface area and metabolic adaptation.   I'm not sure what to make of this to be honest.  It seems more an accounting of the evidence with no real attempt to explain it.

Next they administered a "glucose meal" of 100g glucose solution.  This was in place of the midday meal at 1pm.  Energy expenditure was measured for 2½  hours afterwards.  I've summarized the results below, all averages:


During the 2½ hours, the total calories expended were:
I should point out that I came across this study looking into the thermogenic component of exercise in anorexics and through another study. I only mention this because when one looks at lean and obese people, it is generally the lean that have a higher thermogenic response -- e.g. increase in metabolic rate following eating.   It is assumes that the reduced thermogenic response is an impairment in the obese.  If anything, this aspect of physiology or metabolism is maintained despite severe restriction and malnutrition.

This post turned out a bit longer than I had intended, and there's nothing all that monumental about it.  The subject numbers are small and the variability of various factors within those numbers is substantial.

However inasmuch as we can glean anything from this, even following significant starvation to the point of emaciation, once a person is refed, the adaptive metabolic slowdown is reversed to a large extent.  This reversal seems to be less complete for those who were "previously obese".   One of the differences often observed between lean and obese is this ability to "waste" acute excesses in the form of a higher thermic response to food.  This does not appear to be at play here with the POs.  So why do the POs appear to have a more suppressed metabolic rate compared to controls and "recovered" anorectics who were never obese?
So I'm going to leave it at this for the time being.  If anyone out there is aware of any prospective studies that measured metabolic rates in kids and looked at adult rates of overweight and obesity 10-15 yrs down the line, I'd love to get my paws on such a study's results!  It's really the only way to know with some degree of certainty.  If not, I hope NuSI has a minion reading here and takes note.   Since they are measuring energy expenditure and focusing on calories after all, such a study would be a good use for those millions,  It may actually produce information that will help people avoid obesity in the first place.