It's TOTAL Energy Expenditure that Matters, and RMR Doesn't Necessarily Predict It!

In the context of weight loss, maintenance or gain, eventually all roads lead to the acceptance that *calories matter* ... you must be in deficit, balance or surplus respectively.

In the wake of the recent The Biggest Loser Regain study, there has been a lot of doom-and-gloom reporting, led by Gina Kolata and Sandra Aamodt in the New York Times.   I've distilled the results down to the bare bones:


The "alarming outcome" was that resting metabolic rate was reduced as might be expected, but seemingly remained suppressed and even further declined despite significant re-gain (70% re-gain/loss for the mean) after 6 years.   However the TEEs -- the TOTAL energy expenditures for the day -- tell a different tale.  These were measured over a roughly two week period by doubly labeled water in free-living conditions.

And most importantly of all to the big picture
This post is about the RMR and TEE data from another study looking at discrepancies in weight status and reported intake.   When compared to predictions from regression lines (similar method as used in Fothergill) the relative RMR did not track to relative TEE.


So as I continue to recoup from recent travels and the real life job, and get caught up with things, I've got a post about the latest Biggest Loser study and all the surrounding buzz percolating in the background (if you are reading this sometime after May 2016, check this link for it).  As often happens, I hit on some things along the way, and this one I wanted to share in a shorter (notice I didn't say short, grin) stand alone post.

This data and the original plots come from the following study:  Unexplained Disturbance in Body Weight Regulation: Diagnostic Outcome Assessed by Doubly Labeled Water and Body Composition Analyses in Obese Patients Reporting Low Energy Intakes.    You may not recognize the title, but this study was fairly widely circulated a couple of years ago, despite its 1995 date, and is regularly cited in various online communities I frequent, usually to support the idea that all obese people underreport intake and therefore nobody can ever count calories anyway, so why bother.  Something like that ...

The study involved ten women of various ages and sizes who were considered "weight loss resistant" because they could not lose weight despite reporting low (often "ridiculously low") intakes.  Here is the subject characteristic data.  I used the %fat to calculate the FM and FFM columns and then sorted on FFM so as to be able to match them to the numbers on the plots.  I'm not getting a good match-up but share this anyway.  I note that the largest subject is a teenager and was not included on the plots, and the smallest subject was excluded from the regression line generation due to medications, etc.

1.  There is much less scatter (and deviation about the regression line) for RMR than there is for the TEE.   This should be expected because of all of the other factors that go into TEE.  Also this TEE is an "average" over a period of days vs. a comparatively quick single point determination for RMR.

2.  The slope of the TEE regression line is steeper than that of the RMR line.  In other words, whatever the absolute caloric differential between a smaller person and a larger one is at rest, the the predicted differential is far greater over the entire day.

I hesitate to draw too much inference here vs. other regressions, but these were developed in 80 overweight/obese subjects (BMI > 27).  The TEE line is much steeper on the same vertical calorie scale.   This is something to expand upon in future discussions, but someone on the lower side with 40 kg FFM (in this population that equated to subjects weighing in the 150-160 lb range) has a predicted RMR of 1425 and TEE of 2200 cals (less than 800 calories differential), while someone towards the upper end with 70 kg FFM (250-300 lb range in this population) has predicted RMR of 2225 and TEE of 3800 (a difference of just under 1600 calories).

In the "real world" it's TEE that matters, so let's put this one more way!  The absolute difference in caloric expenditure between a ~155 lb person and a ~275 lb person at rest is predicted to be ~800 calories.   When those same people go about their days the absolute difference in caloric expenditure predicted (based on models from actual measurements) is roughly 1600 calories, which, as serendipity (?) would have it is twice 800.  Putting 800 calories into pictures for the Incestral Health Community, I present this photo without further comment. 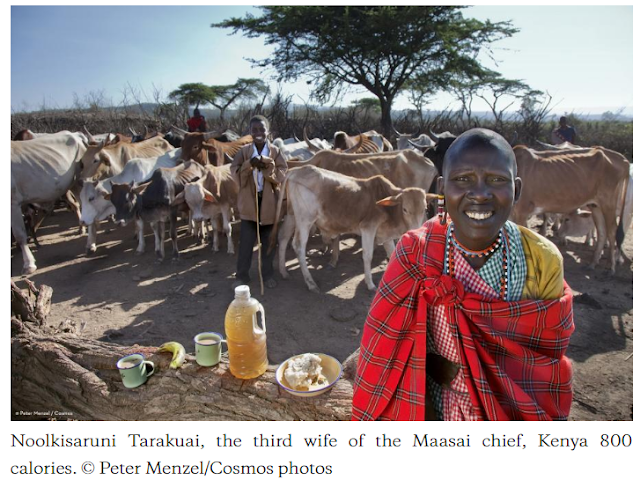 3. The "prediction" for TEE based on relative RMR (actual vs. predicted by regression) is highly inconsistent.

This is what jumped out to me! Note, for example:

4.  In terms of practical applications for "you" as an individual perhaps seeking to lose or maintain weight, or a coach/trainer seeking to resolve discrepancies for a client,

All in all, of the nine subjects included in the plot:

What my overlay shows, because we have a small number of data points and can match them to a single subject, is that relative RMR doesn't track very predictably to relative TEE.

As mentioned in the post summary, this is something that was glossed over in the doom-and-gloom reporting of The Biggest Loser regain study, and I will address this in my upcoming post.   While the RMRs seemed out of whack, the TEEs were not so much.

Take Away:  Clearly the RMR is only part of the expenditure!  This is nothing new, but it is often forgotten when studies such as this latest one come around.   Every INDIVIDUAL is different.


5.  Revisiting point 2, and taking into consideration that I haven't had the time to see how the regression equation used (derived in this study) here compares to some common ones like Harris-Benedict or Mifflin-St.Jeor (if you have time and wish to share your findings, please do!), I want to revisit the differentials in expenditure.  In practice, TEEs are usually estimated by multiplying the RMR predicted by one of these types of equations by an activity factor.  These usually range from 1.2 for extremely sedentary to 2.0 for super hard labor/endurance athlete.  I'm going to use 1.2 and 1.7 as examples in my table/calcs.

It is not at all uncommon for the normal weight of someone weighing 275 lbs to be 155 lbs.  So let's approach this from a start point of obese at 275 lbs.  This person, according to a regression from actual measurements, is predicted to expend 3800 calories in a day which is 1600 calories a day more than that same person would be predicted to expend at their normal 155 lb weight.    Now let's all pretend to be this 275 lb person looking "at the charts".  The chart says that this person must be engaging in heavy activity to get to 3800 cal/day.  Guess what?  THEY ARE.  From getting up out of bed in the morning, every step of the way they are lifting, moving, swinging some part or all of 120 lbs.  We think that's somewhat factored into the RMR equations, but the measurements and the equations and the slopes tell a different story!   You'll notice that there aren't many dots up at the high end of the regression, but time and again, in studies where intake has been reliably assessed for weight stability, most are expending (and thus presumably taking in*) upwards of 3000 calories per day.  For the regression in this study, several were measured above 3500 calories per day.  [* there is some disconnect in some studies between expenditure by doubly-labeled water and intake in metabolic ward or other well controlled environment, I hope to address that at some point]

I'm not going to go into all the various comparisons in this post, but I highlighted the differentials between the 155 and 275 lb person in the bottom in blue.  Perhaps as that 275 lb person rapidly loses 30, 60 or the full 120 lbs to 155, they no longer get the same "activity" bonus for the weight?  They are conditioned to all the lifting, and it requires less effort to move about at a reduced weight?  There's something plausible there, but I'm not prepared to flesh it out at this time.  We have some pretty verifiable measurements of different populations, at times decades and even a century+ before this current diet-fitness-health environment we're in now, of normal expenditures in living active humans around the globe and in so-called Western countries.  These tend to come in below the values being bandied about in this post.  See my final point

6.  Bonus "confounder"!  As I've discussed before the range of "actual" deviations for any predictive equation is considerable.  This is from the post I just linked to, and is the scatter plot from which a predictive regression equation was constructed.

On left I scanned up to show that you can get a measured B(asal)EE of around 1300 kcal/d for individuals for whom regression would predict a BEE of around 1350 ... but the scatter if the actual data points is from ~1125-1500 kcal/day.  On the right, I did this "in reverse" and you see a similar scatter of measured BEE at a single predicted level.  To repeat:  These are the actual data points from which the predictive equation is derived!  Put yet another way, the nonobese individual represented by the open circle lowest on the red vertical line on the left would be seen as having a "reduced metabolism".  This doesn't render regressions and modeling useless, but it does give one pause as to whether the deviation from the "norm" is significant and/or what it is attributable to.

So what should we make of all of this?   I know I'm repeating myself, but I will save the full discussion for later when I have time to flesh things out.  Here's the Cliff's for now.  If you are gaining weight, you are eating too much for your current energy needs.  If you are not losing weight, you are eating "just enough" for your current energy needs.    Here's a summary of the energy picture in this study (I did my best to estimate calories from the plots to 25 calorie increments).   Keep in mind that the predicted values use a regression line for energy expenditure vs. measured fat free mass.  I have not had the time to compare these to other predictive models.

In the end it may be better to begin with the best estimate of your "normal weight" and what the most conservative predictions of your energy needs at that weight are.  Work from there.  WARNING:  Tough pill to swallow awaits.  I am not saying go eat that way tomorrow, but 3000 calories a day is not going to bring most people anywhere near their ideal weight.  That is the bottom line here.

So as I make no promises but express my blogging ambitions here, I hope to expand upon the above words and thoughts, and perhaps even test the waters of including my personal experiences more often again.   I'll definitely be tying this into the Biggest Loser discussion in the near future.  In the mean time, I linked to Leigh Peele's Mifflin-St.Jeor calculator, and while you're at her site, I highly recommend her response to the NYTimes (and others) seemingly throwing in the towel:  A Response To The New York Times Biggest Loser Study  I'm going to screen capture the conclusions, but do read the whole thing for a pep talk! 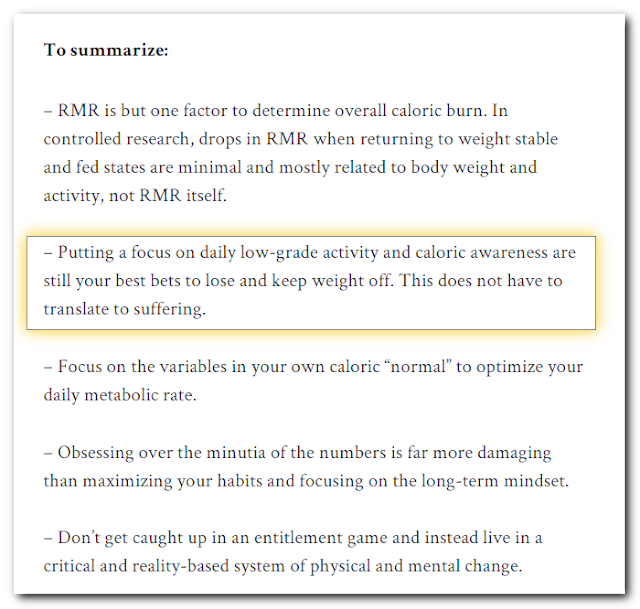 This is a ggreat blog